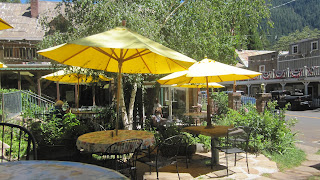 Ian and I drove over to Nevada City on Wednesday. We decided to take Hwy 49, because even though it's longer, it's the scenic route through Gold country and we had time. We stopped in Sierra City to have lunch and enjoyed a delicious meal in this unexpected garden restaurant.

I had a four hour shift that evening at the Nevada County Fair in Grass Valley, demonstrating spinning with the Foothill Fiber Guild. We have two points of demonstration, one in the livestock area and one indoors. My first shift was in Ag-sperience and even though it had been hot during the day, it cooled down for a fantastic evening. We were swamped with interested fair goers.

My second shift was Thursday afternoon from 2:00-6:00 and I was glad to be indoors for that. The displays in the guild room were effective and people again were interested and engaged. I felt like a Chatty Cathy doll, pulling my string and repeating the information over and over - for four hours! I love it that people are interested and want to learn, adults and children alike. 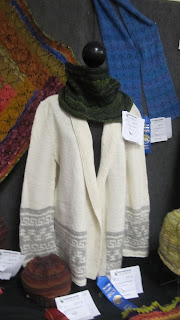 I was excited to receive the first place ribbon in the hand knitted garment category and the competition was stiff - even better. I'm really happy with it. It looks good and it fits me well. The cowl was added for display purposes and was knitted by someone else. 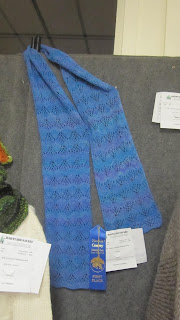 I also won the blue ribbon for my scarf. The skein won a blue ribbon last year so this is a double winner. It's silk, alpaca and merino and feels every bit as lovely as it looks. The towels didn't place but the competition was crazy stiff. 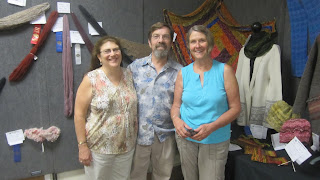 I had the added treat of hooking up with an old friend whom I've connected with on Facebook. He and his wife life in Yuba City and said they've always wanted to come to the fair, just haven't done it. They came up Thursday after Barbara got off work, and even though it's the first time I've seen John since 8th grade, I recognized him immediately. We ate some fair food for dinner and had a brief and wonderful visit. They took off the see the fair and I left for our cottage as I was exhausted from eight hours of nonstop spinning in the previous 24.

We had rented a cottage at the Nevada City Inn and shared it with Little Sharon and grandson Noah who drove up from the City. Sharon and I stayed up after Ian went to bed and visited for a couple of hours, just the two of us. Ian got to spend a lot of time with them both while I was demonstrating. He also had the pleasure of meeting up with an old friend and spending some time together, with their reconnection again being through Facebook.

We got home to a crippled air conditioner and blazing heat. Through Angie's List, Ian located a plumber who came out yesterday and got everything back in working order. He had to replace something in the fan and replace the thermostat. In spite of it being a Saturday and having to travel an hour one way, with parts and mileage, it was under $300. And he was a really nice guy on top of it! 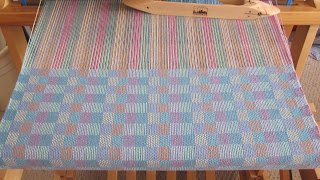 I'm trapped in the air conditioned indoors until the weather cools which isn't supposed to be for another four days. The Aloha towels are underway. On the last series I got spots of color and I'm getting blocks of color now instead. I wanted spots again but I can see why I'm getting blocks. There's so much to learn about the interplay of color!
Posted by Sharon at 3:48 PM

As usual, your work is beautiful. Full of passion! As the fair was approaching I kept thinking I should check in with you because I figured you'd be in town. Unfortunately my fundraising endeavors are keeping me very busy and before I knew it the fair had come (and almost gone). Double unfortunately, I was actually at the fair on Thursday doing a live interview with KNCO radio. I'm sorry I didn't contact you as I would have loved to have seen you. Take Care, your thoughtless niece, Nancy

Way to go on the ribbons - both are exceptional!

Way cool!!! Two blue ribbons is wonderful and I am thrilled for you.

I hope things cool down for you so you can be comfortable outside again. I know how much you like spinning on your deck.

Congratulations on the fair results. Your ribbons are well deserved! It sounds like your time at the fair was busy and fun.