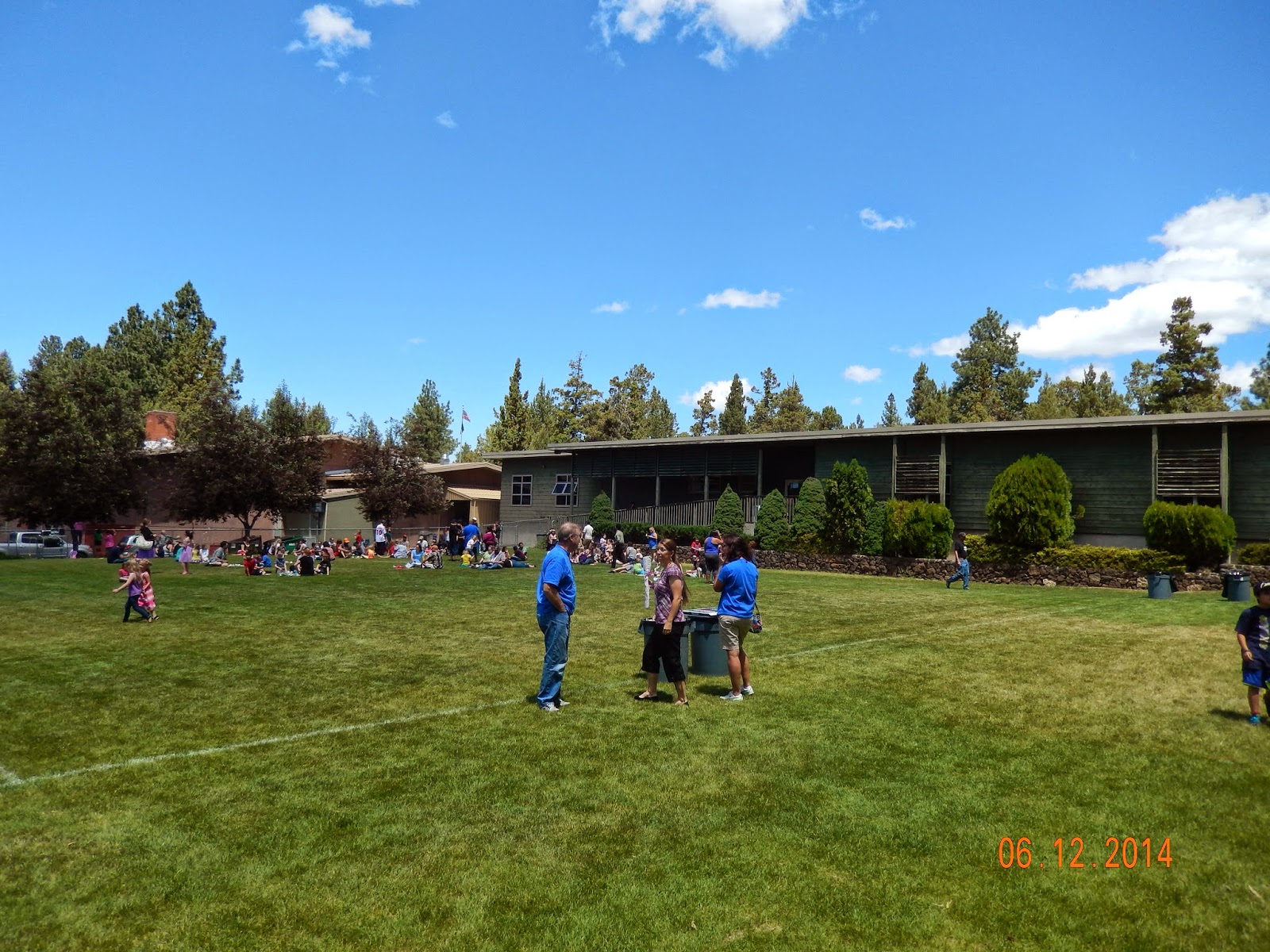 On Thursday, the last day of school, we attended the Family Barbecue at Evan's school.  It was brilliantly handled in shifts and by grades.  All food is prepared on site, the hamburgers were cooked on barbecues outside and the food was astonishingly delicious.  We ate on the athletic field grass.  Missy and Ian are throwing away our plates - what a wonderful last day of school.  And how different from Washoe County where all food is prepared off-site and delivered wrapped in plastic - all food!  What frustrates me is that hot food like spaghetti is microwaved in the plastic wrap, in spite of known risk of BPA in food heated in plastic. 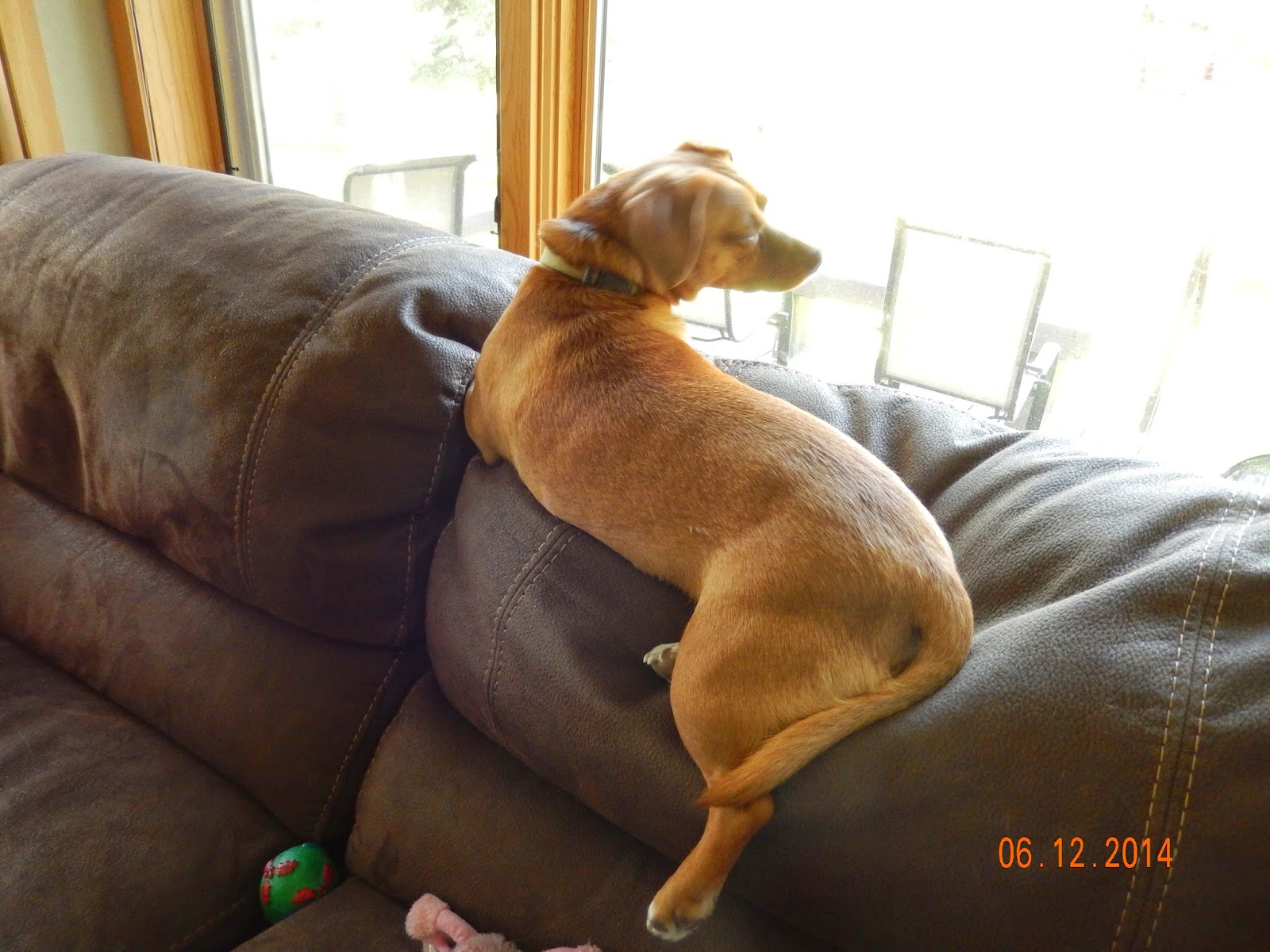 Rusty is especially going to miss Ian.  They napped together here every afternoon.  That green ball on the sofa is never out of his sight.  He always knows where he left it. 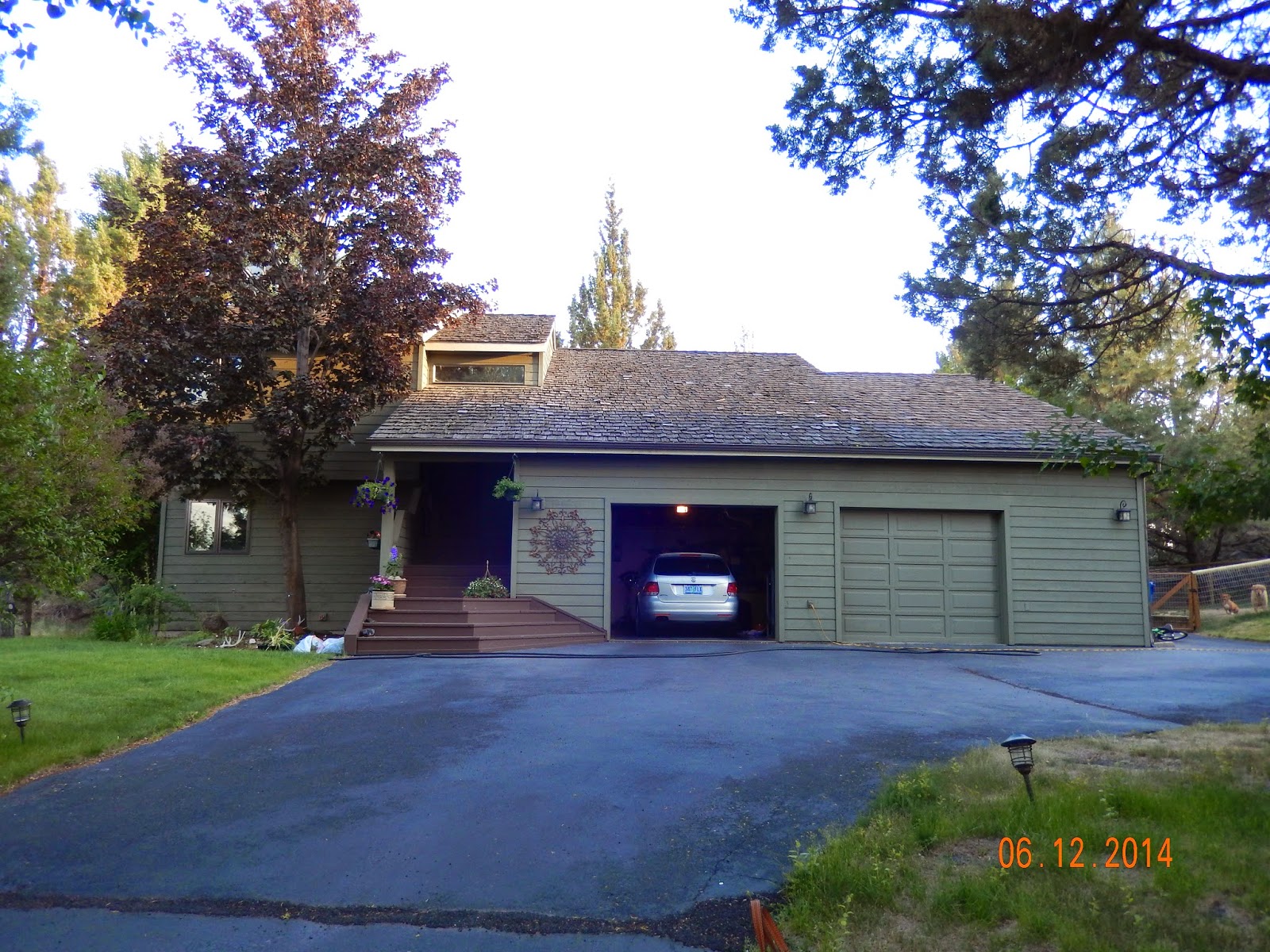 Every visit ends and leaving never gets any easier.  In our one week we attended four baseball games, one film festival, a field trip to Newberry Caldera and one family barbecue!  We had planned to watch Missy run the Dirty Half half-marathon, but it was cancelled due to smoke and ash.  I think we'll shoot for the last week of school in the future - lots of activities and lots of downtime. 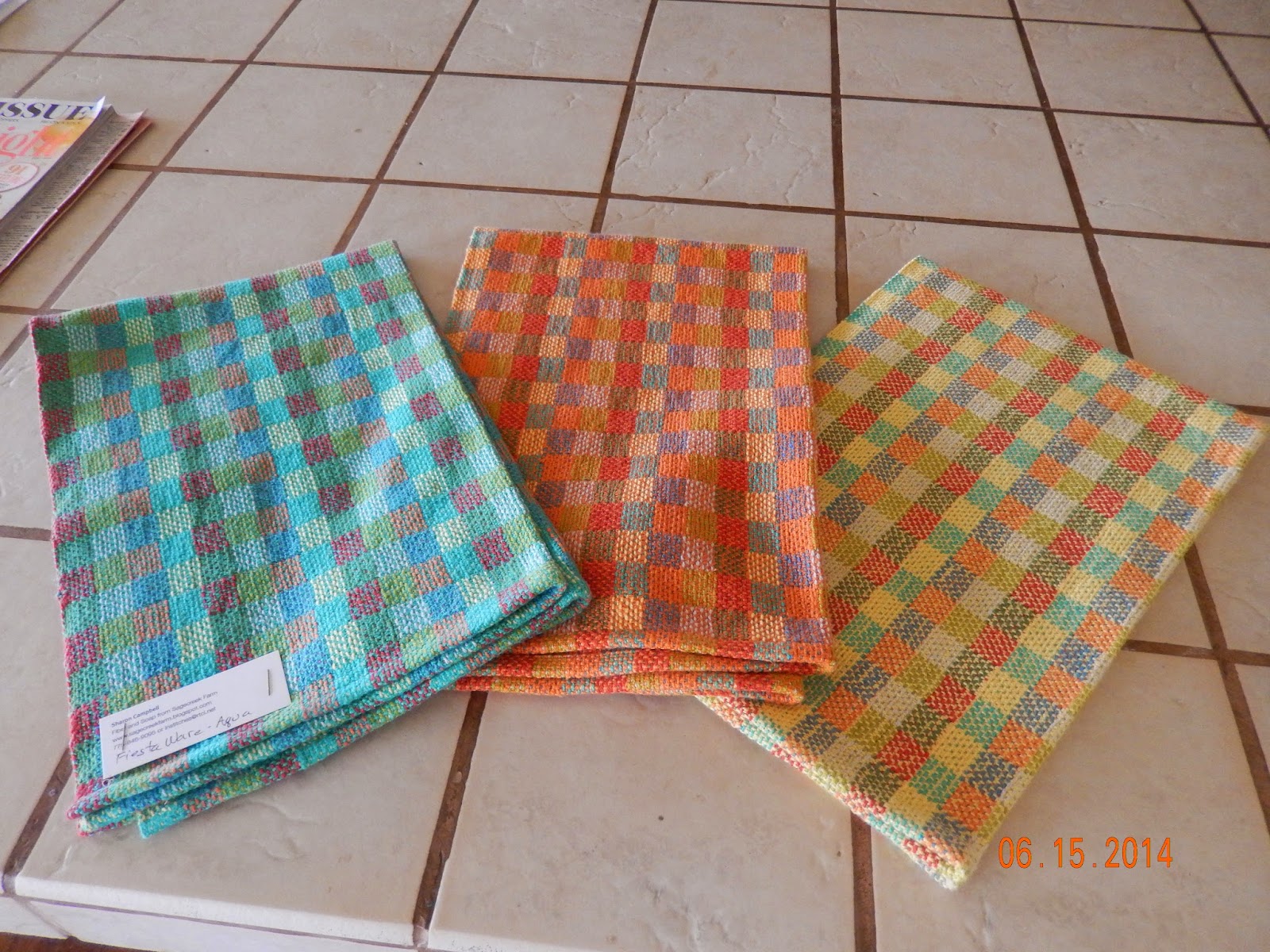 I got an alarming email from Etsy while we were there.  Homer Laughlin had registered a complaint against these towels and I was informed that they had been delisted.  I had written that these are inspired by Fiestaware colors, which is a clear trademark violation but since it was only three towels, I thought it wouldn't matter.  Wrong!  I posted about this experience on the Facebook 4-Shaft Weaving group.

I was surprised at the lively discussion that ensued.  A number of articles were posted.
This one is on copyright colors.
It turns out that Fiestaware also sells linens so I was in clear violation.  It was pointed out that ignorance is no excuse.
This article is about the line between "inspired by" and infringement.
And this one is on the fuzzy line between creativity and copyright.

If you are a hobbyist but sell your work, I suggest you take a minute and browse through this information.  In hindsight I realize I was lucky to get off with a wrist slap.  I realize I would be cruising for a bruising if I list my "Campbell's Soap" on Etsy under that name.  On a happy note, a woman in the group bought two of the towels. 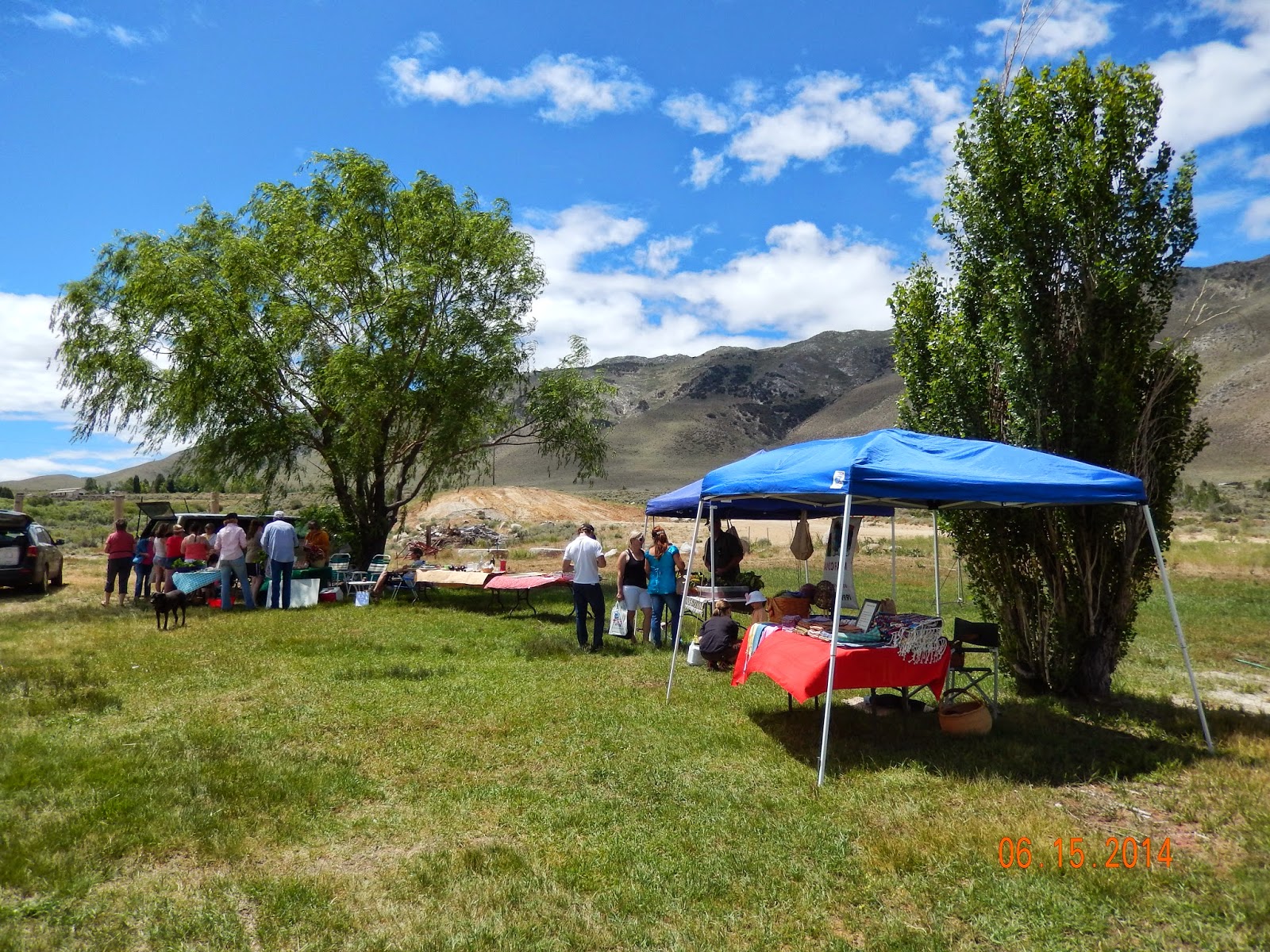 Sunday was the first farmers market out here in our valley.  I realized that the reason these are so successful is that we don't have many opportunities to visit and get to know our neighbors.  I sell better here than any craft show I've done and there's no booth fee.  The wind was problematic and I ended up having to stand at my table for all four hours to keep my stuff on the table.  Good thing it only goes from 11:00-3:00.  Perfect! 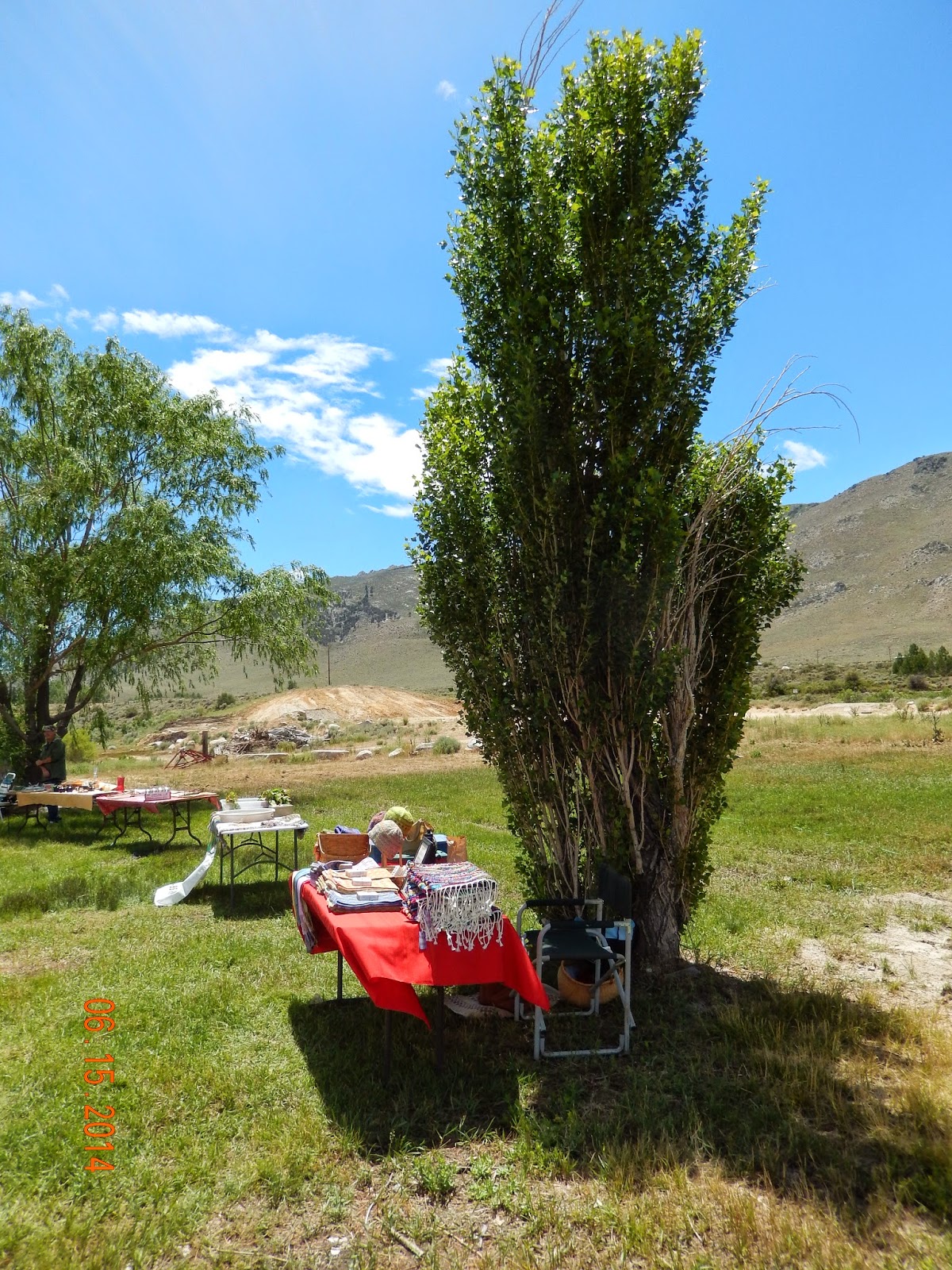 The guy next to me had his shade tent blow over, bending the legs.  I realized I didn't have the strength to take my Easy-Up down in the wind and texted Ian to come help me.  Next time I'll just tuck into the shade of this Lombardy Poplar and skip the shelter. 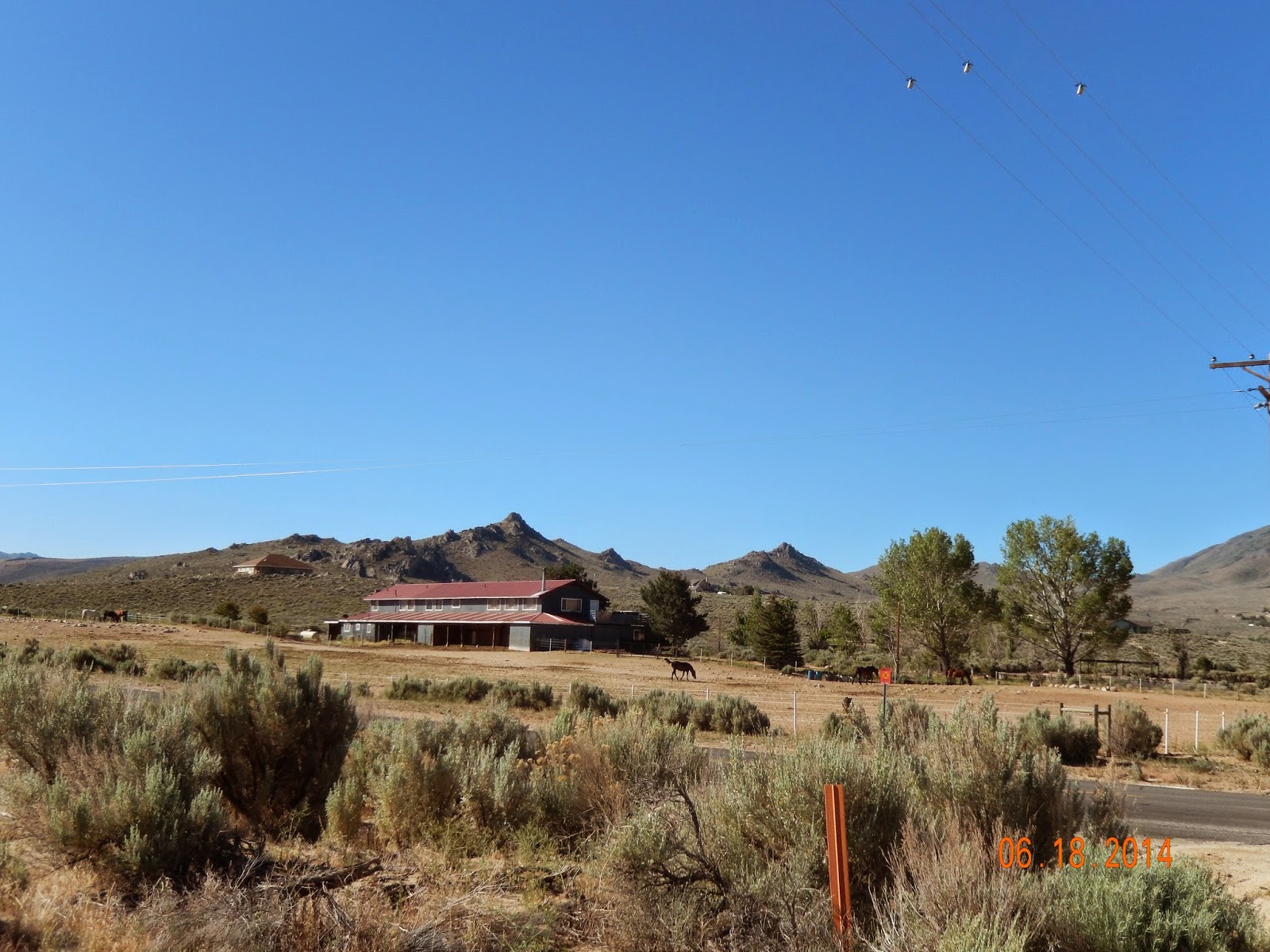 I walked down to the mailboxes this morning to ship off three towels that sold on Etsy, my first sale this year.  It was almost a disaster because I had sold two of the towels the day before but hadn't deleted them from Etsy.  I emailed the lady and she ended with three towels, some that I didn't list, that are a better harmony.  They are for her son's wedding, which really touched me and she is very pleased.  Me too! 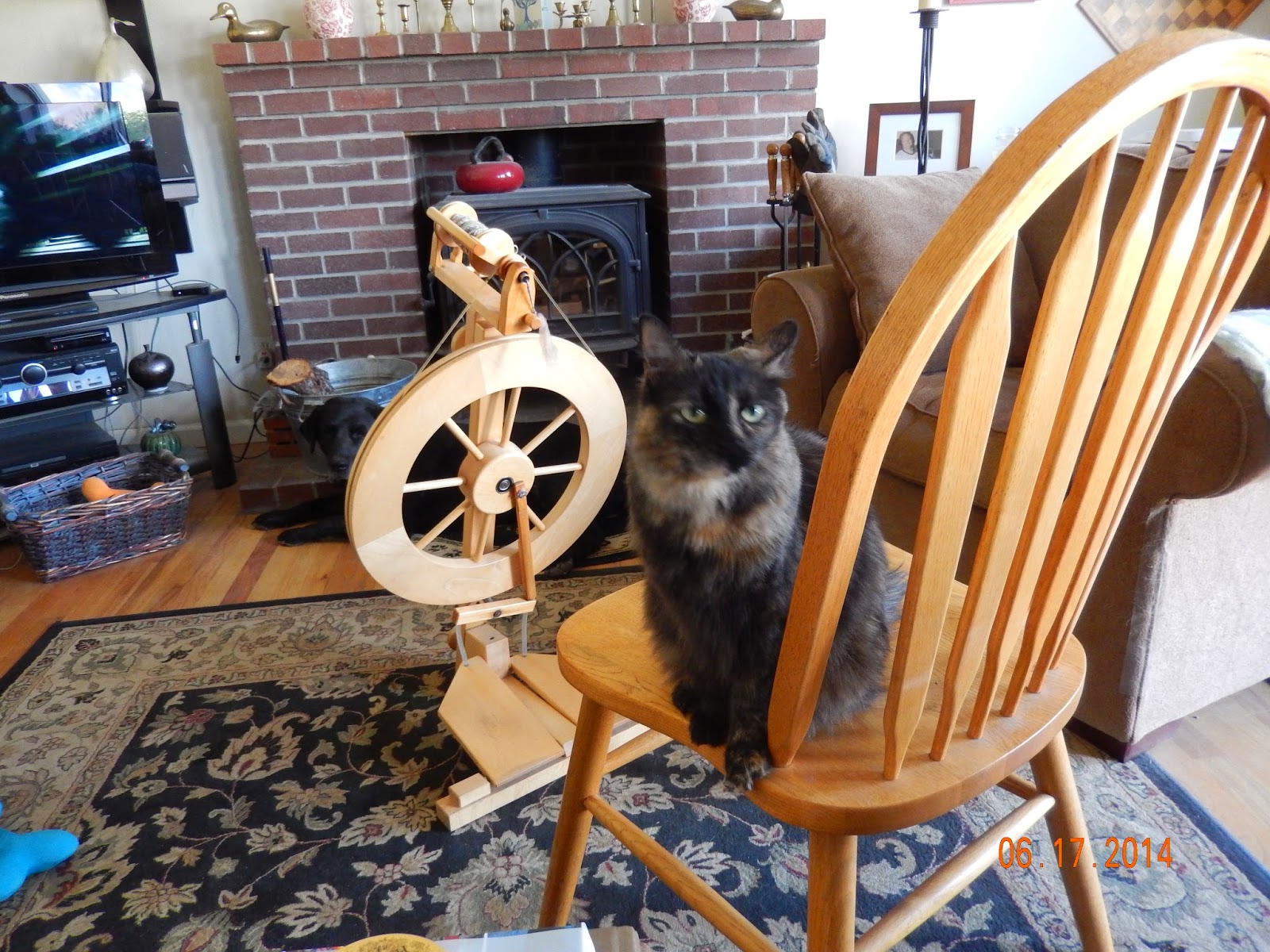 And speaking of weddings, my daughter Chris and I are flying back to Massachusetts on Saturday for my grandson's wedding.  I'm spinning yarn to knit on the flight and watching World Cup Soccer. Someone seems to think I might need a little help.  I'm so glad I have a full week in between trips because I am running out of time.

Every time I get up from my weaving bench, there's a furry friend keeping it warm for me! How weird that you can't even say they were inspired by something copyrighted.