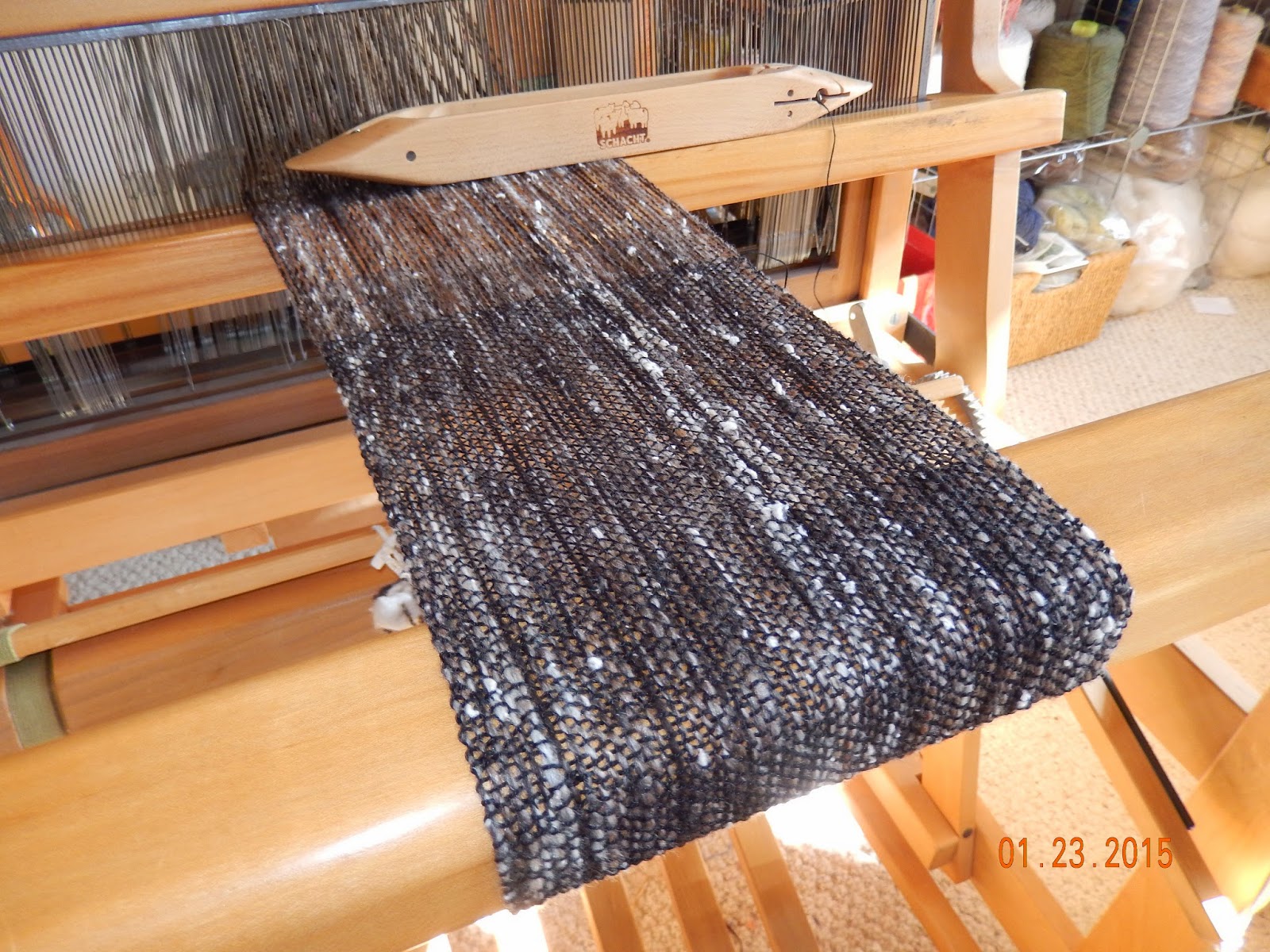 I used to spin in the mornings with my coffee, but now I have my coffee while I hold the heated pillow on my neck alongside my S.A.D. light and check email and Facebook for that same period of time.  Recently I decided to see if I can't get my spinning mojo back and put on a warp of some existing handspun yarn.  I've finished this scarf, posted a picture on Facebook and someone has expressed interest.   I've already started spinning some new yarn! 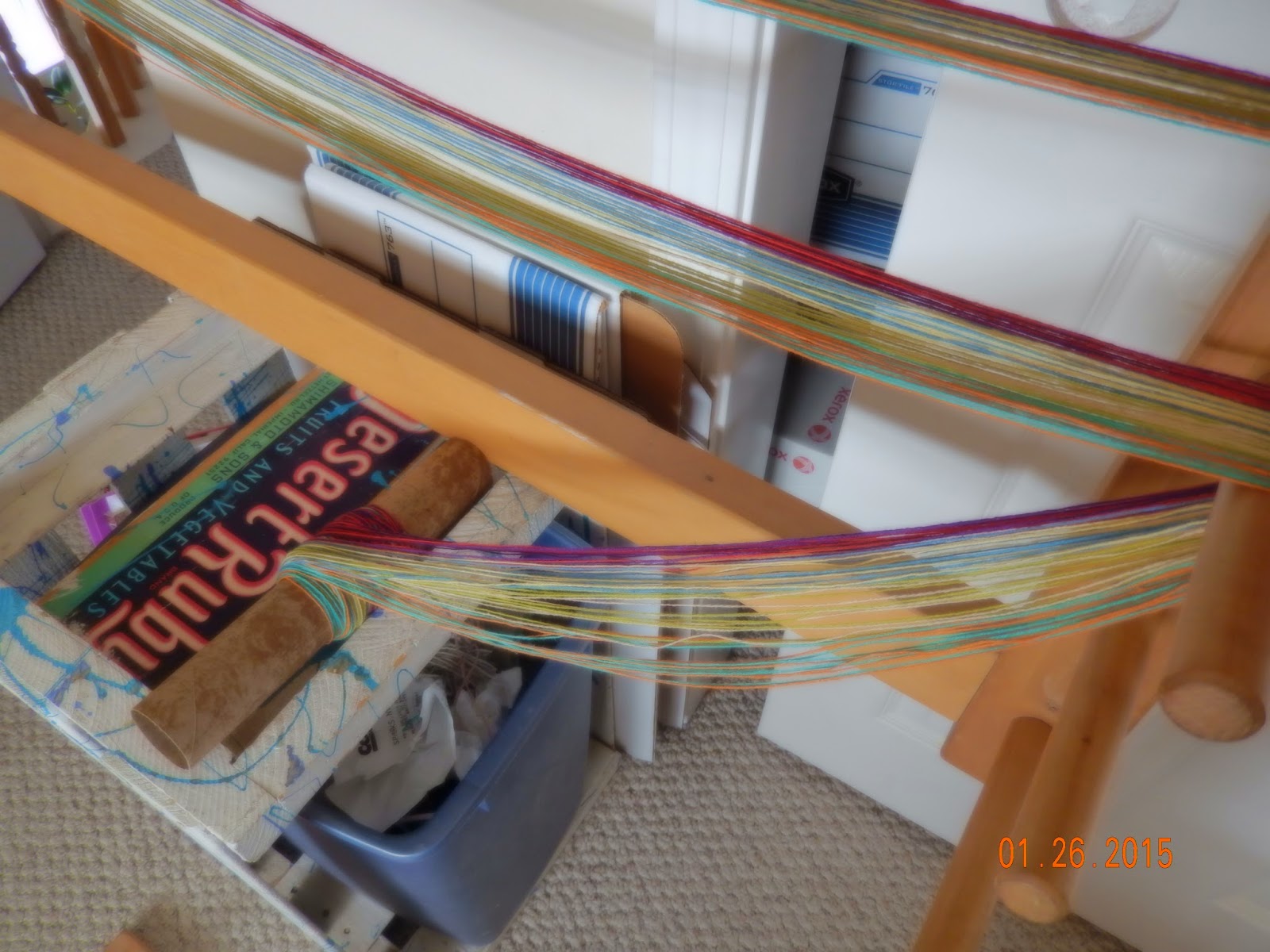 That left me two nekid looms so I'm first warping Maudie Mae for more towels.  My friend Ingrid says she never chains warp, but rolls the bouts onto paper towel rolls.  She even sent me pictures to illustrate. 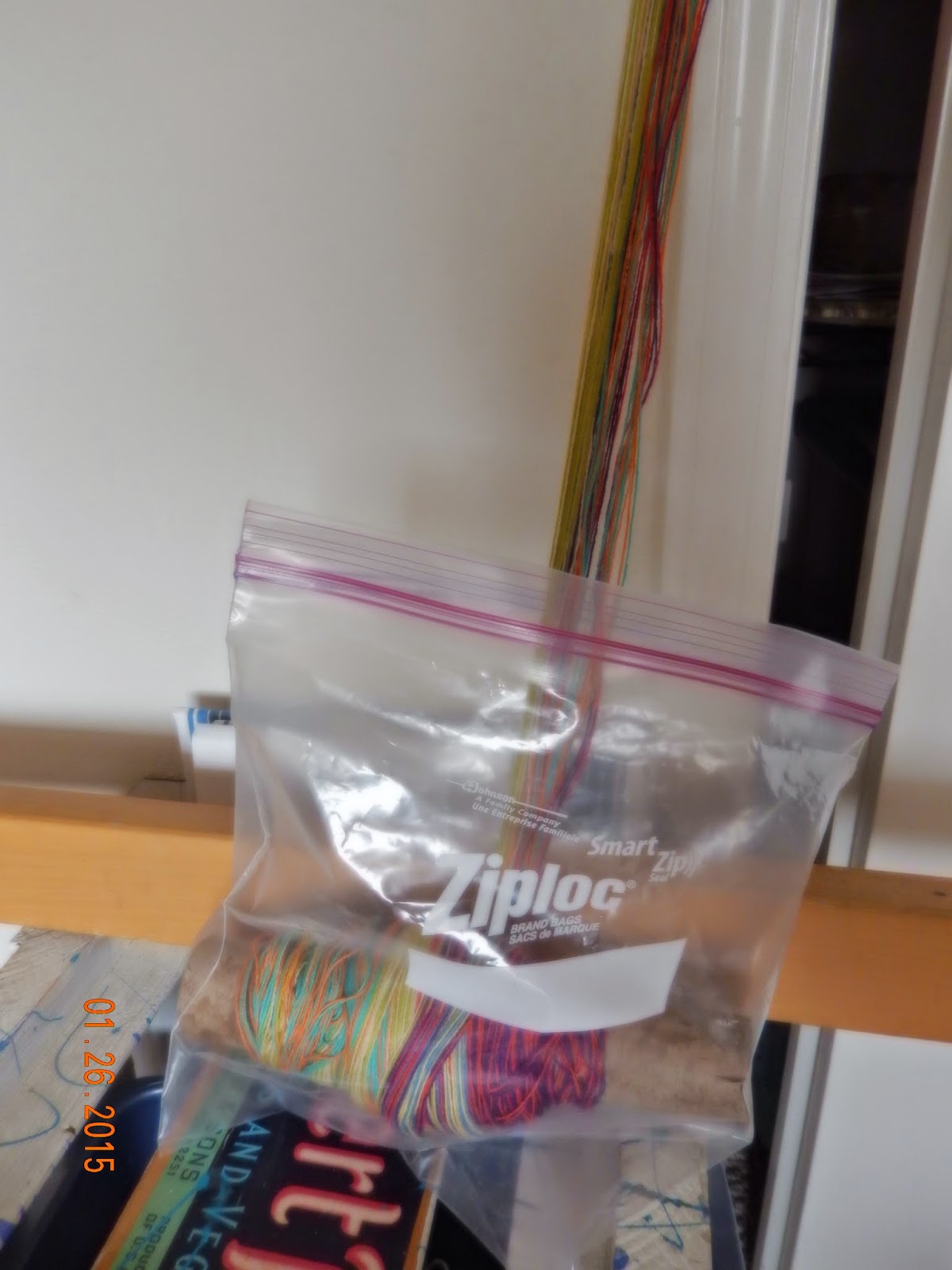 Then she puts the rolled up warp into a plastic baggie.   I've been saving rolls and even though I don't have enough, I decided to give it a try. 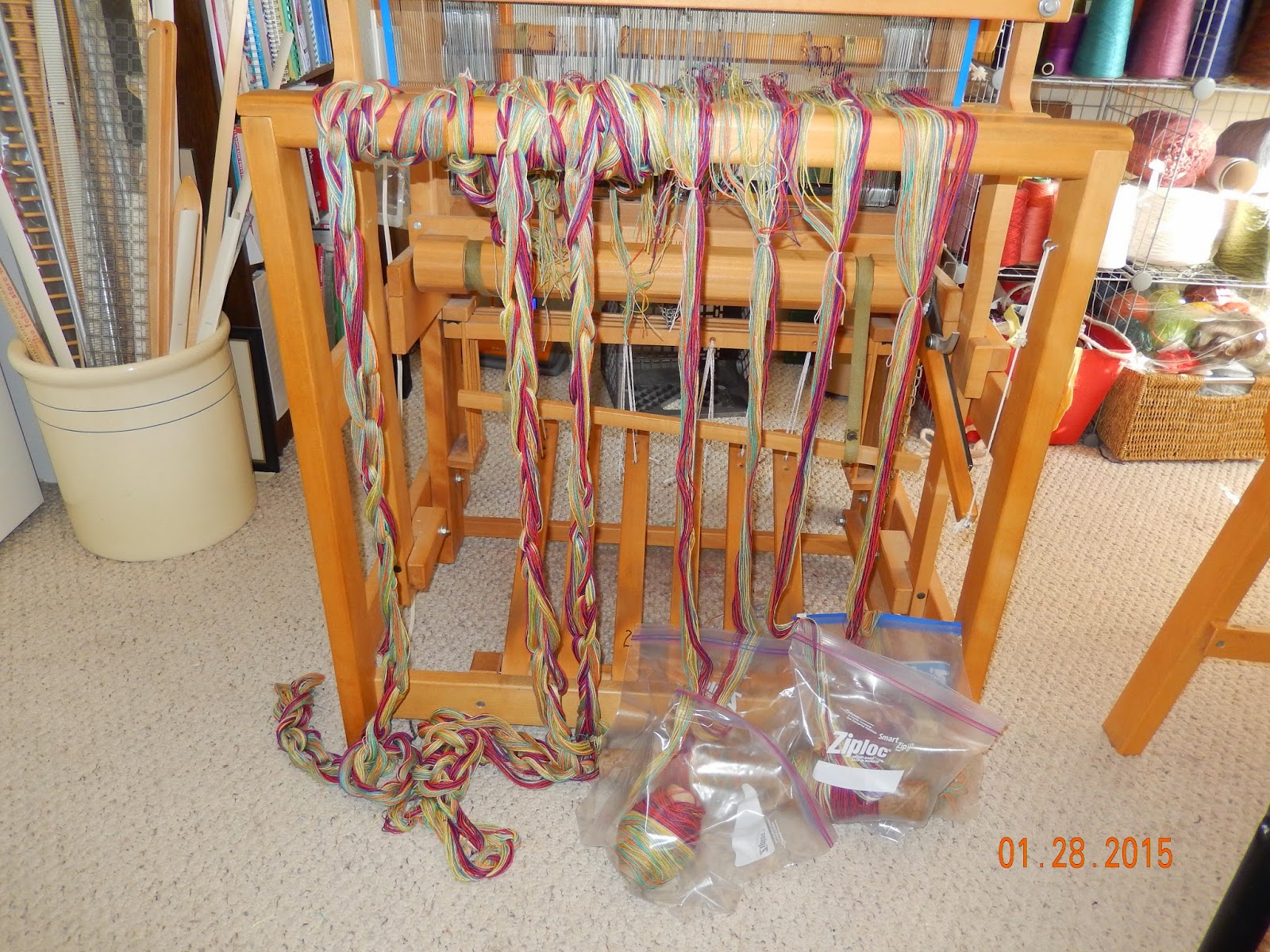 Four bouts are rolled and three are chained.  I think this will be good test though I'm not going to know anything until I get it threaded and start to wind on.  Already though I can see that the chains twist and the rolled warp stays in place on the tube. 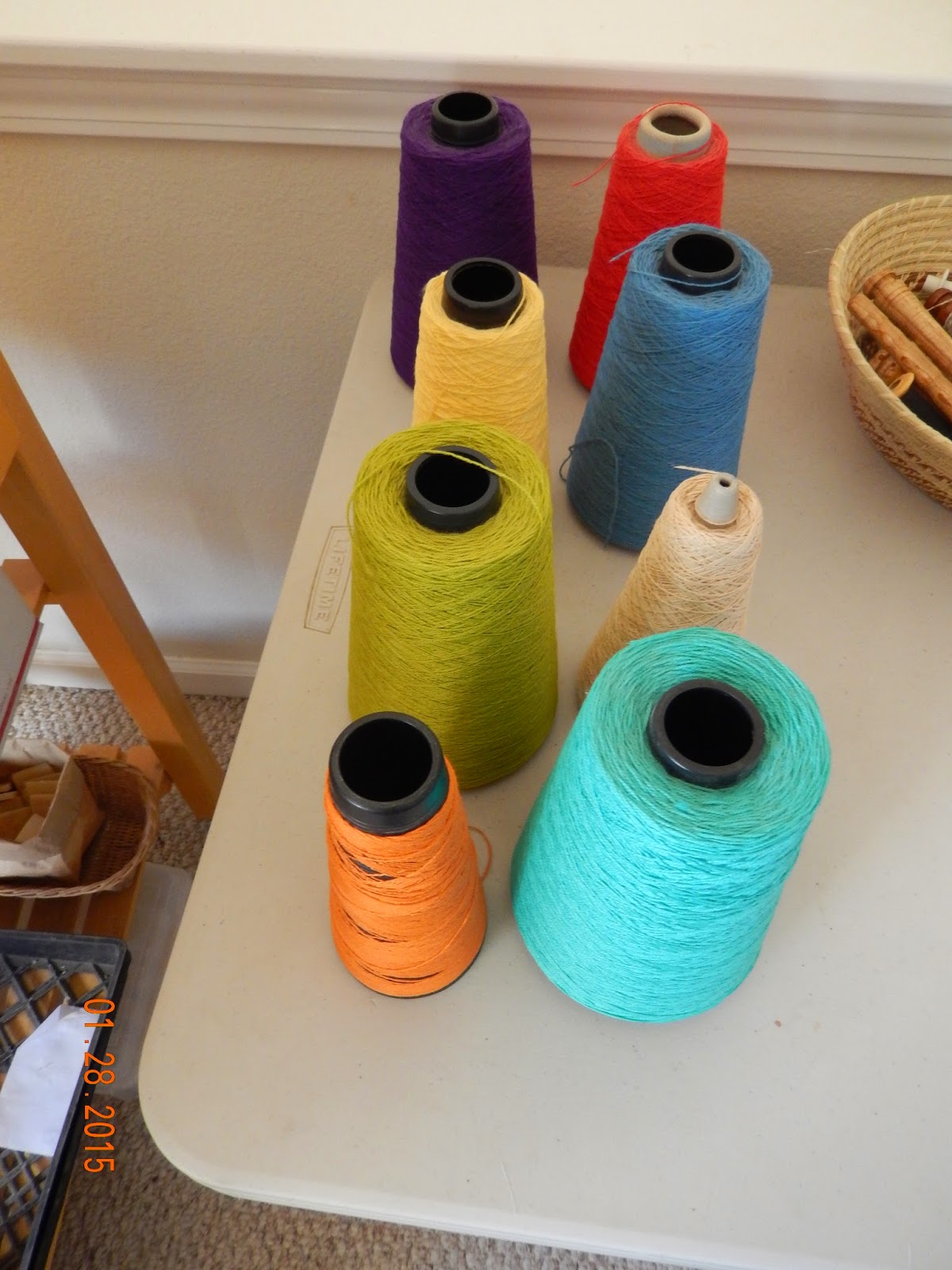 I have no idea what my inspiration was for these colors other than that I'm tired of winter.  If it's going to be cold then we should have sort of precipitation.  This is the closest I've ever come to running out of a warp color without having a backup cone. 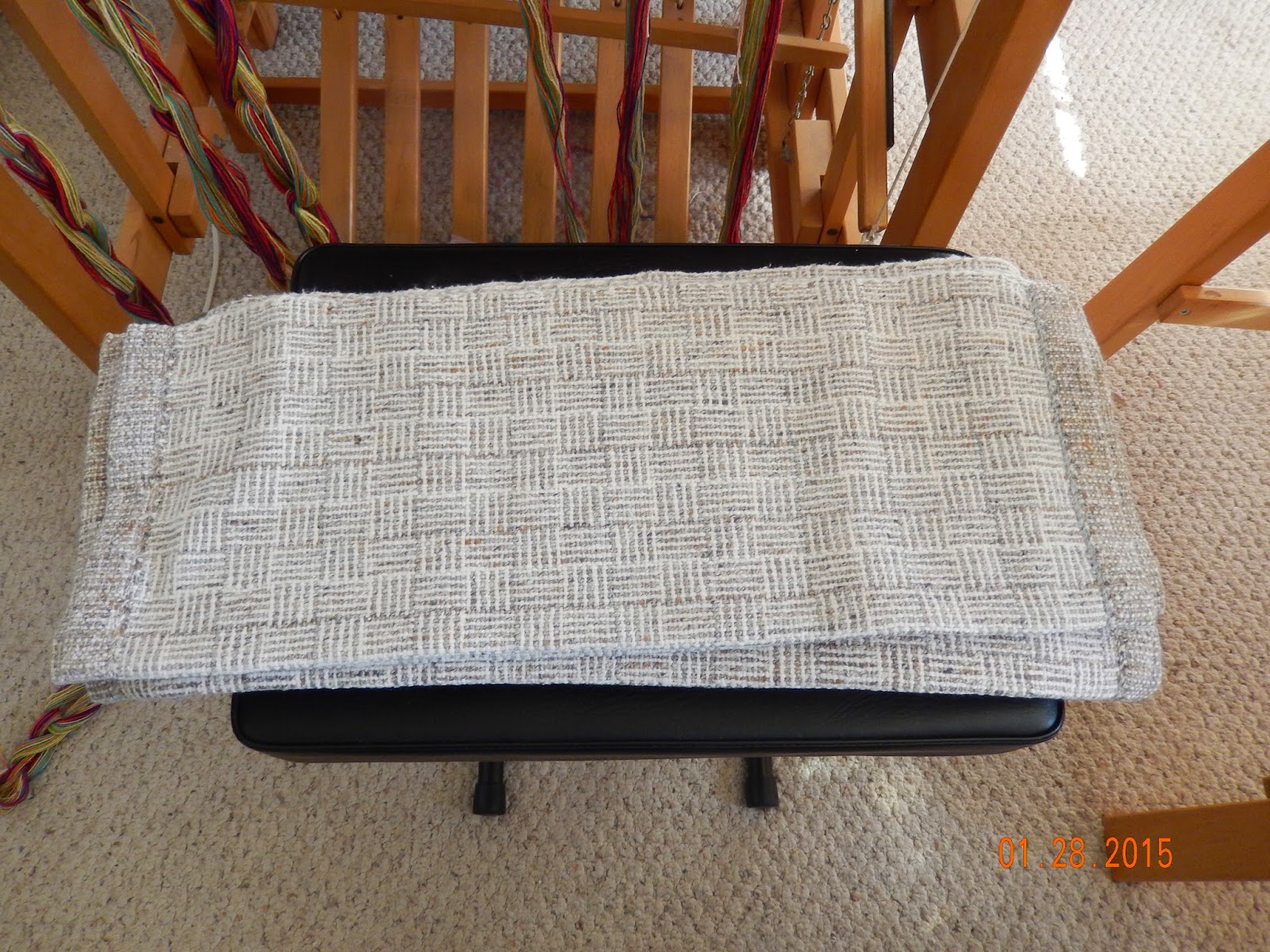 These are the towels I just took off Arthur.  They're 3/2 unmercerized cotton and have been through the washer and dryer twice, and both times they filled up the lint filter, and boy did they shrink.  I have no idea if they will appeal to anyone looking for dish towels and if they don't, I won't make any more.

I'm going to be in town all day tomorrow.  I always try to get as many appointments in on the same day as I can and this trip is going to include lunch with my daughter, which I'm very much looking forward to.  I'm also looking forward to my guild's first huck lace weave-study group in the afternoon.  I have wanted to learn this weave structure for years.  Something tells me that the next warp that goes on Arthur will be huck.
Posted by Sharon at 3:29 PM

Interesting about rolling onto paper towel rolls - yes, it wouldn't twist so that's probably a good thing. Let us know the difference when you wind on.

You are going to LOVE huck!!! Get ready for a fun experience!

I want to hear about how the paper towel rolls work! I love your tired of winter colours.

LouAnn and I had a study group for huck lace that kind of petered out, but she and I are still doing it. I like it a lot. In fact, I have a baby blanket warp in it right now! Have fun!

Glad you got a chance to try the paper towel rolls!