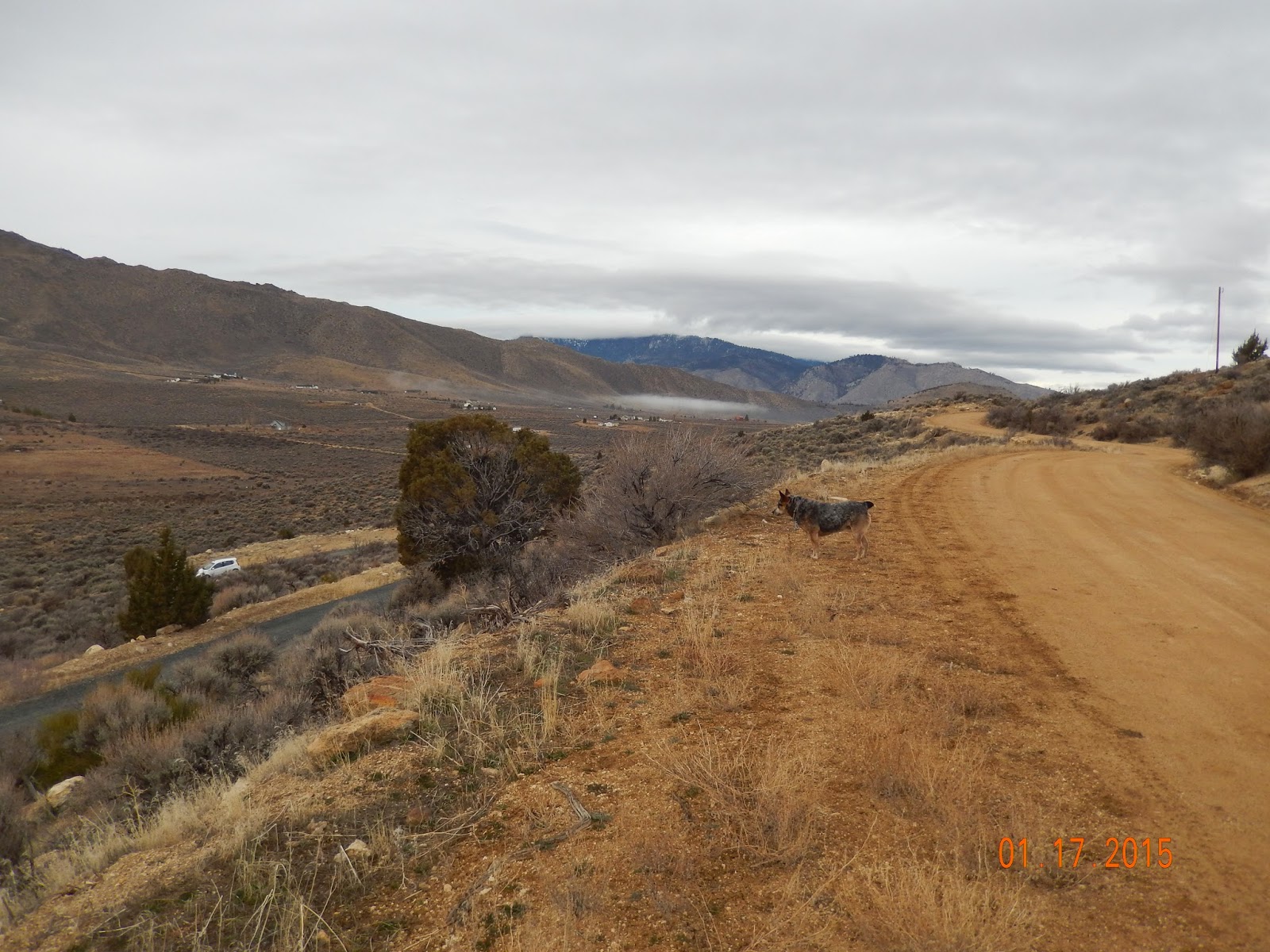 One of the goals I have for 2015 is to walk the dogs each morning and so far I'm sticking to it. 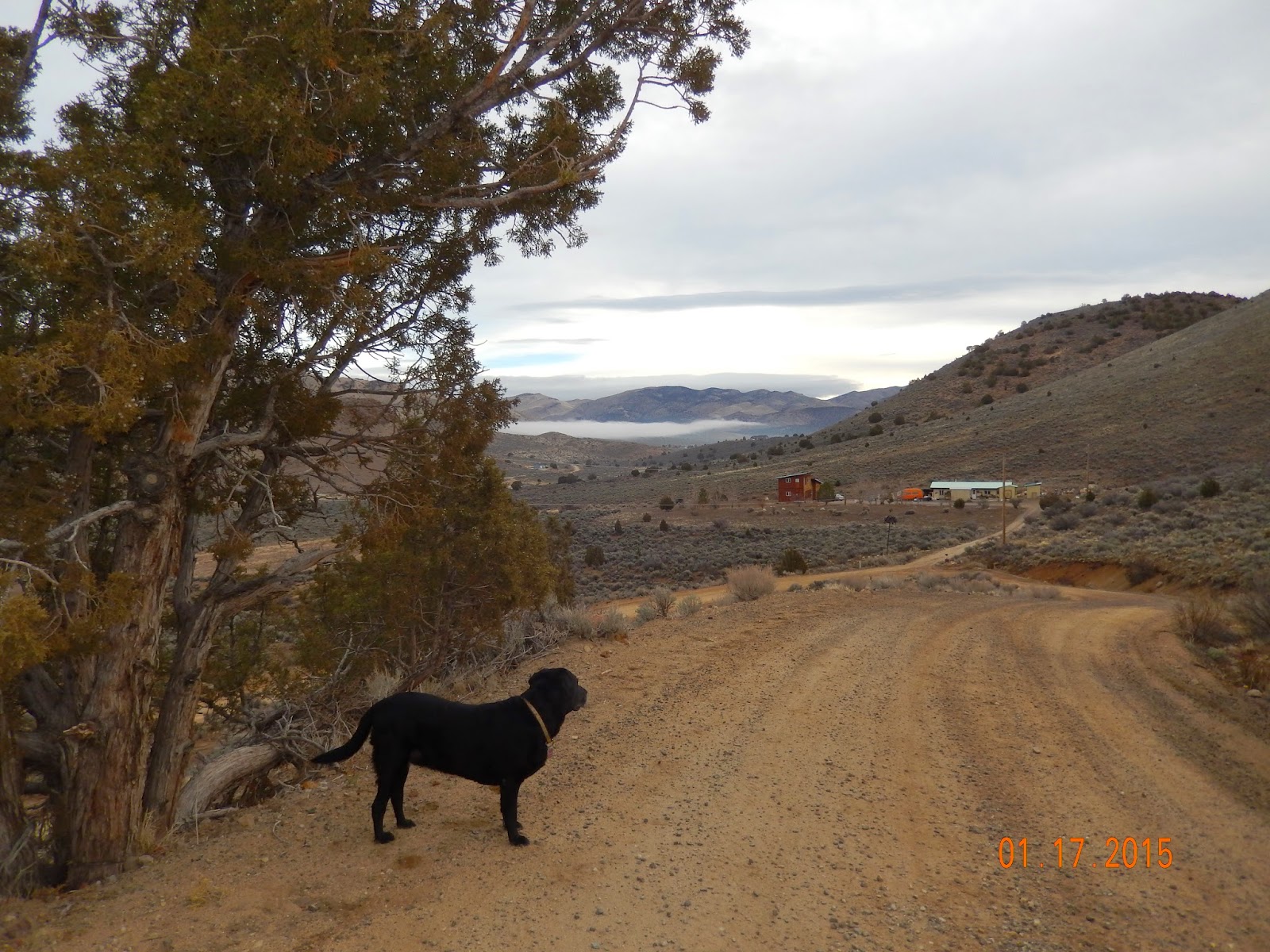 My turnaround is just as Joe Winters pottery studio comes into view.  And for those of you who read the 2014 Nevada Reads book, Twenty Miles from a Match, the Olds' homestead is on the other side of those distant mountains.  I realize both photos have those peculiar low clouds.  Huh. 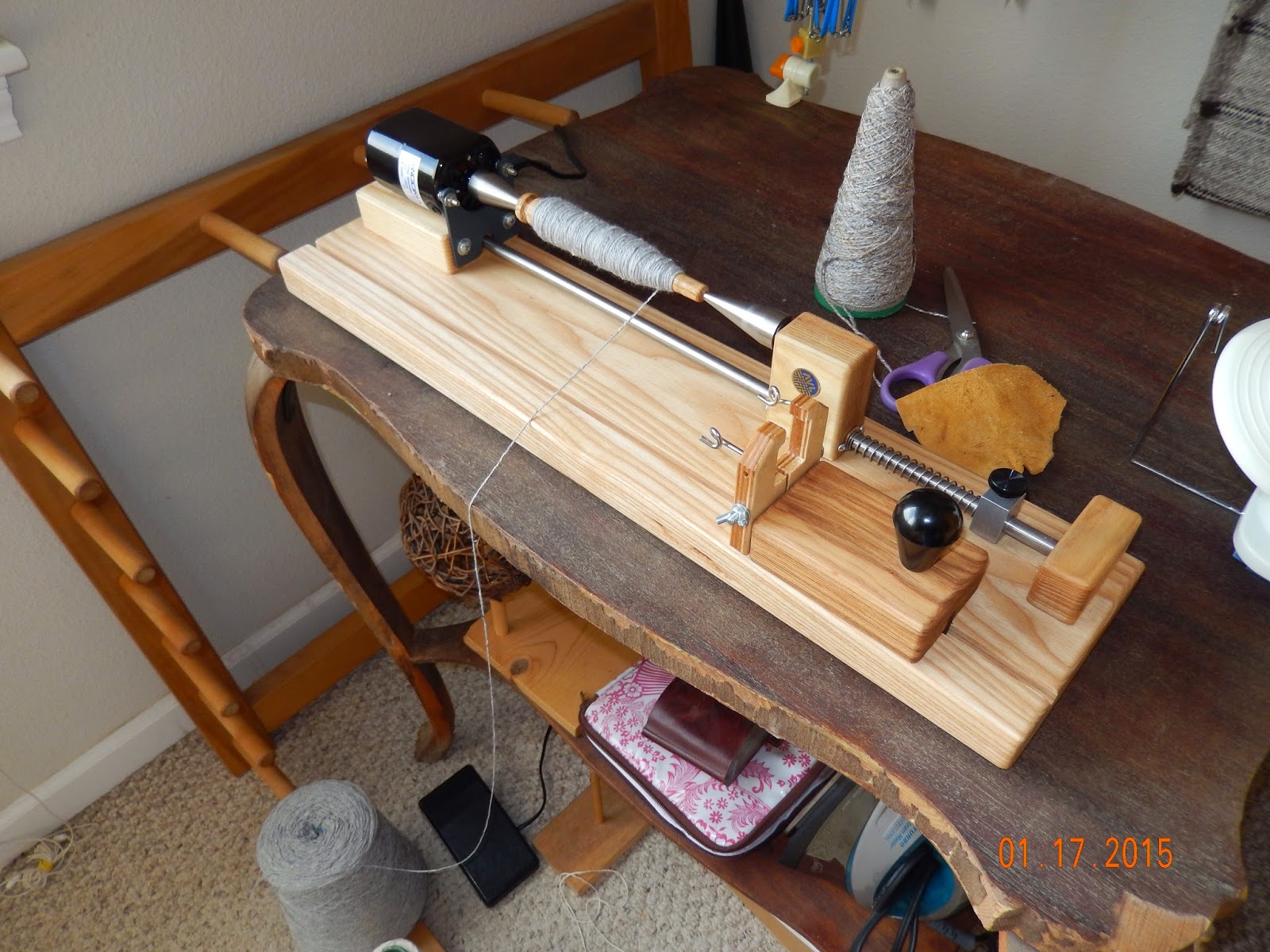 I'm still struggling to learn my electric bobbin winder.  It goes really fast and my coordination doesn't seem to match it's speed.  Nevertheless, the results are fantastic - a firm bobbin or pirn.  One advantage I didn't expect is that the yarn winds on in the opposite direction from the Schacht hand-powered winder.  In other words, the thread comes off the bottom of the pirn and has eliminated any of the tangling problems I was having with my new Bluster Bay shuttle.  That's a nice surprise. 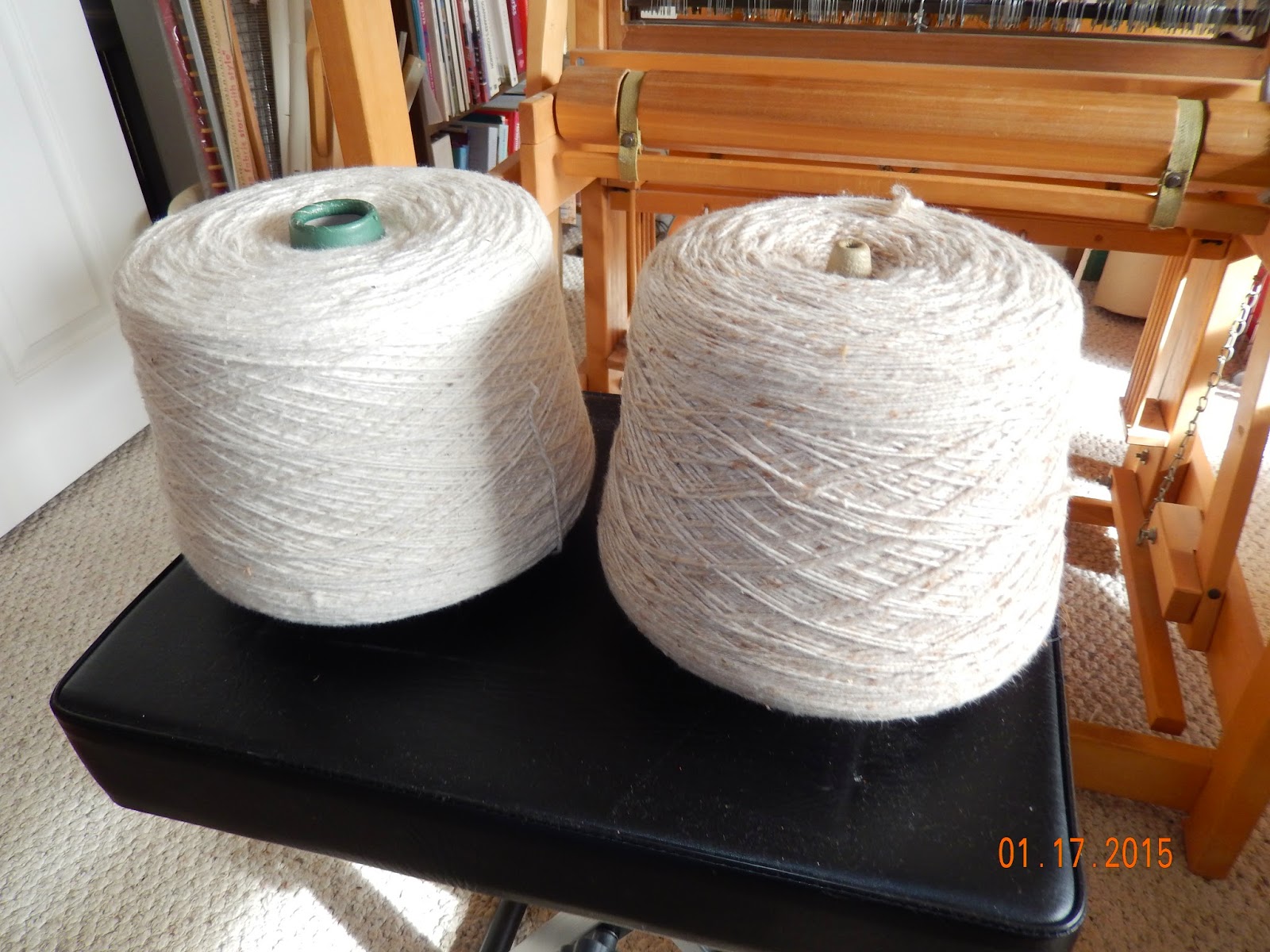 Another nice surprise was that Lorene had more cones of this soft 3/2 cotton so I can easily finish my towels.  She doesn't remember where she bought them, only that she bought a lot and I'm glad she did.  I drove over before acupuncture on Wednesday and I'm back in the towel business. 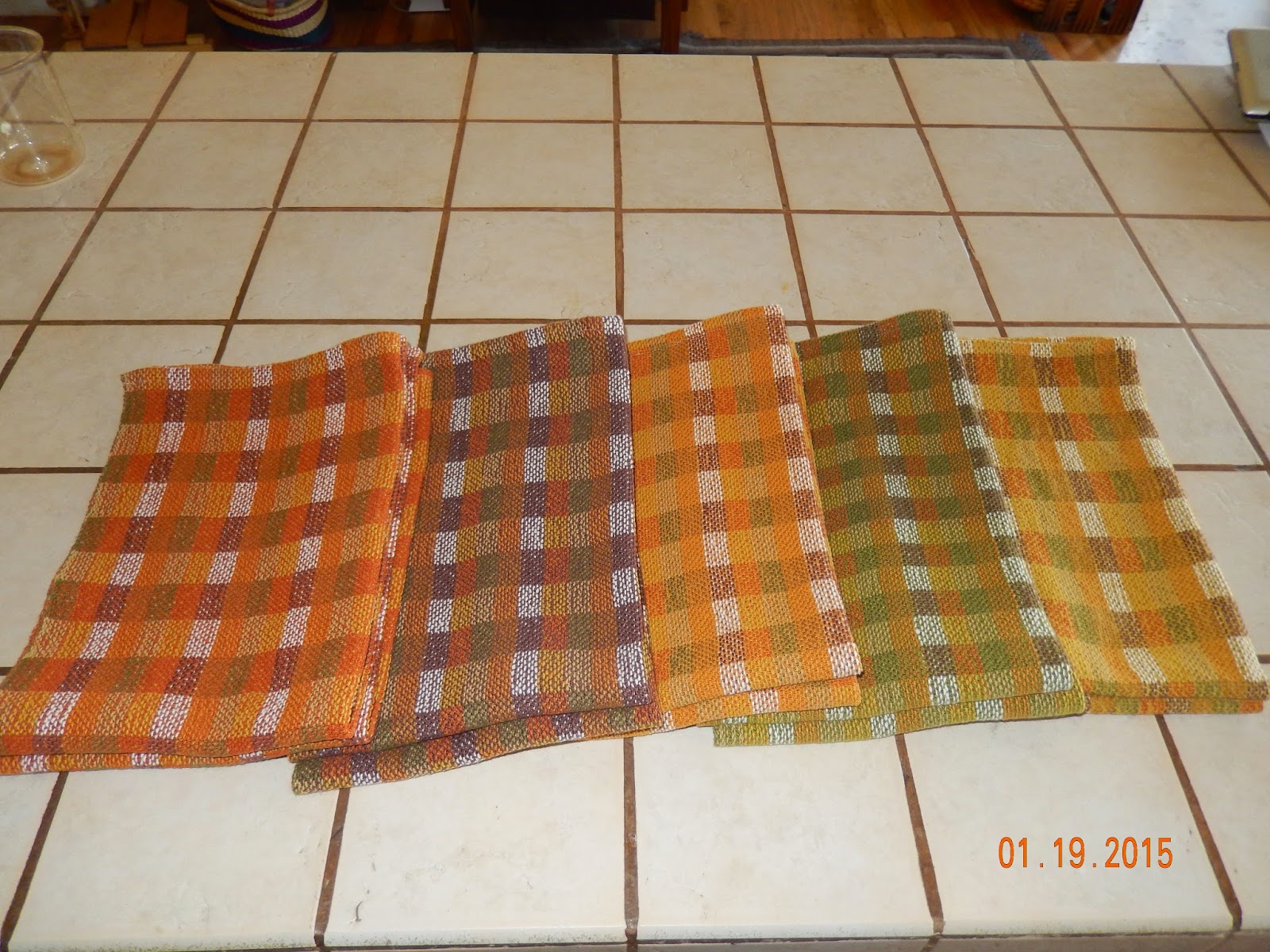 And speaking of towels, these ten are the first I've woven in 2015, and the first of anything I've finished so far this year.  I wove about 110 last year and gave several as gifts but sold the rest.  I have six left so hope to weave a set a month before the Christmas craft fair season. 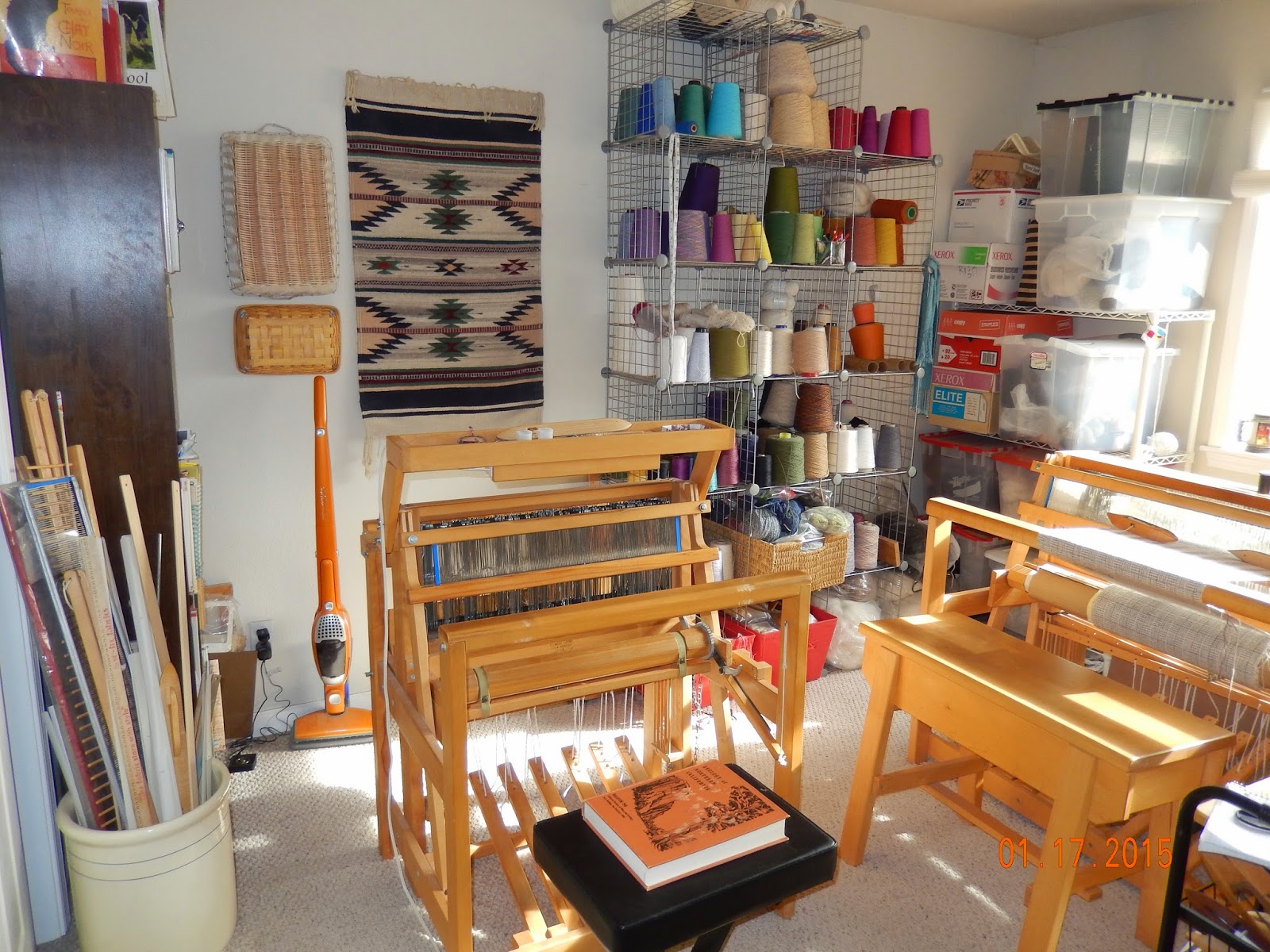 I had to do some rearranging to make space for the large bobbin winder.  It's so wide that I had to turn the table around and lost storage space on either side of the table in the process.  As you can see I'm low on coned yarn.  I'm trying to clear out things like old magazines and books I no longer use to make room for yarn storage.  It's painful but if I can't find someone interested in the magazines, they're going out.  I have Vogue Knitting back to the 1980s and I thought surely someone would like them but they don't even sell on eBay. 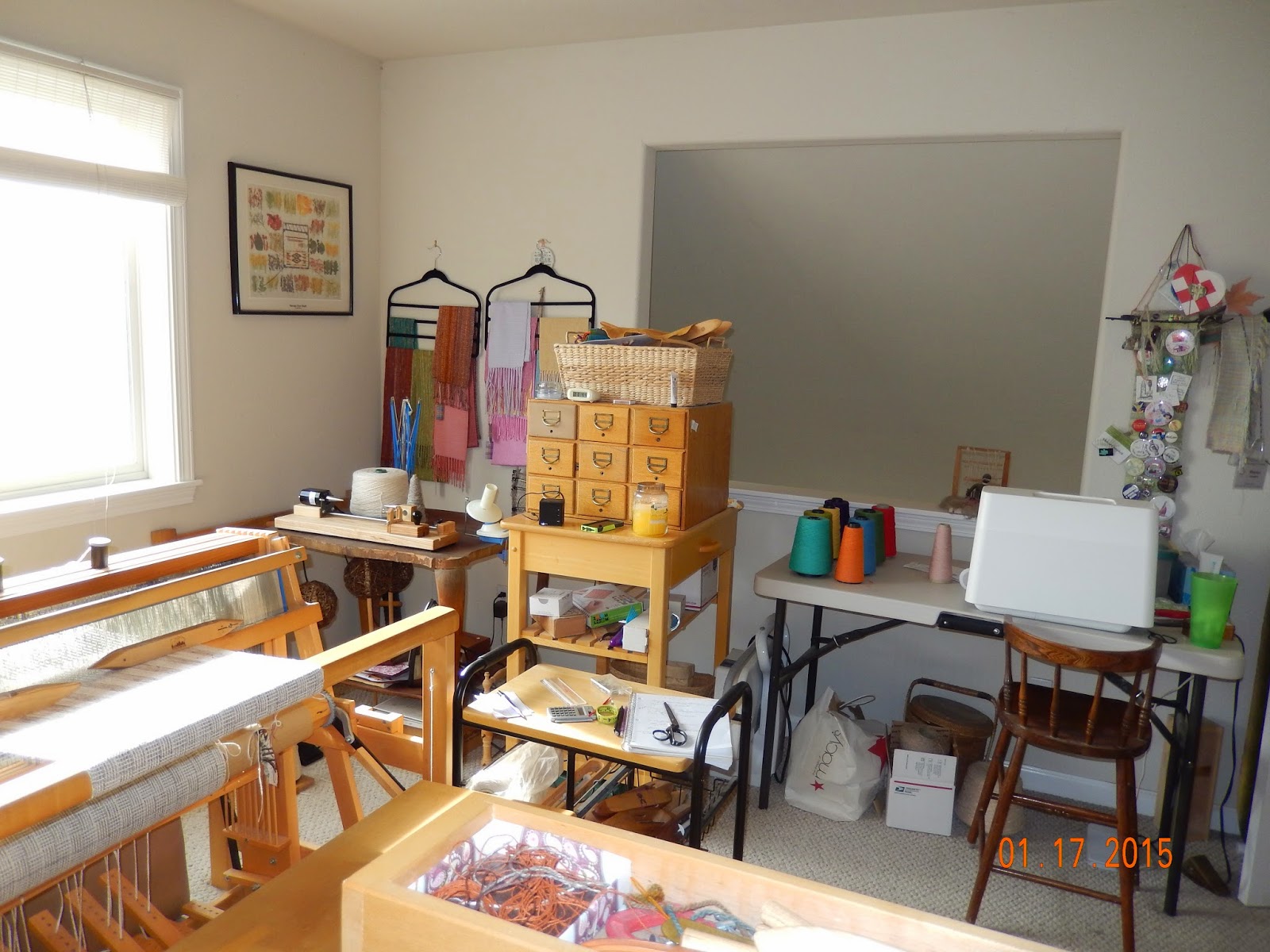 I found space for my "mini mangle" between my rolling table and the sewing table.  The stuff under the sewing table is headed to the thrift store.  I'm getting ruthless.  The cones on the table are my next set of towels.

I had a much dreaded appointment with the endodontist Thursday morning to remove an old root canal because the dentist who did it left some root above it which has become infected.  It first started bothering me when we were in New York in October.  I endured the "rubber dam" and all the drilling to learn that the root is cracked and the tooth couldn't be saved.  I'm so tired the day after acupuncture that Ian decided to drive me to this appointment.  Then he had to drive me to my own dentist for the painful and protracted extraction.  I'm still stunned that I'm short a tooth and cannot believe how much it hurts when it's not even there.

I was feeling a little sorry for myself this morning as I was awakened early by the throbbing.  I'm on penicillin for the infection but it's the dentist's excavation for the tooth of many pieces that is really the source of discomfort.  I finished my coffee and decided to give my friend Melissa a call before walking the dogs.  I think I just wanted to hear her voice.  She moved four years ago and I still miss her.  I jokingly said that probably the only way I was going to see her would be to fly down.  And then we started making plans, just like that.  We both decided it should be February and then she said I should come the 14th and 15th and take a Robyn Spady workshop with her.  After many phone calls and emails, I'm leaving the 11th and returning the 17th.  Only Southwest Airlines could route you from Burbank to Reno via Phoenix but that's the plan.

Somebody on Facebook asked me what Robyn is teaching and I thought - who cares?!! Melissa and I took a three-day weaving workshop from her about five years ago and I would take anything from her.  I just looked and it's Making Jewelry and Trimmings from Your Stash, offered through the Southern California Handweavers. I have to take "Leftover yarns, ribbon etc. Scissors and old-fashion style clipboard" which will handily fit into my suitcase. This cancels out the bad tooth karma.

I have a passionate dislike for all dental work, so I feel your pain. But what a wonderful way to deal with it! I know you'll have a fab time. (Now, when are you going to call or come visit ME??? ;-)

The workshop in the sun sounds like a perfect winter break! Our guild is having Robyn here for a workshop in April - looking forward to it.