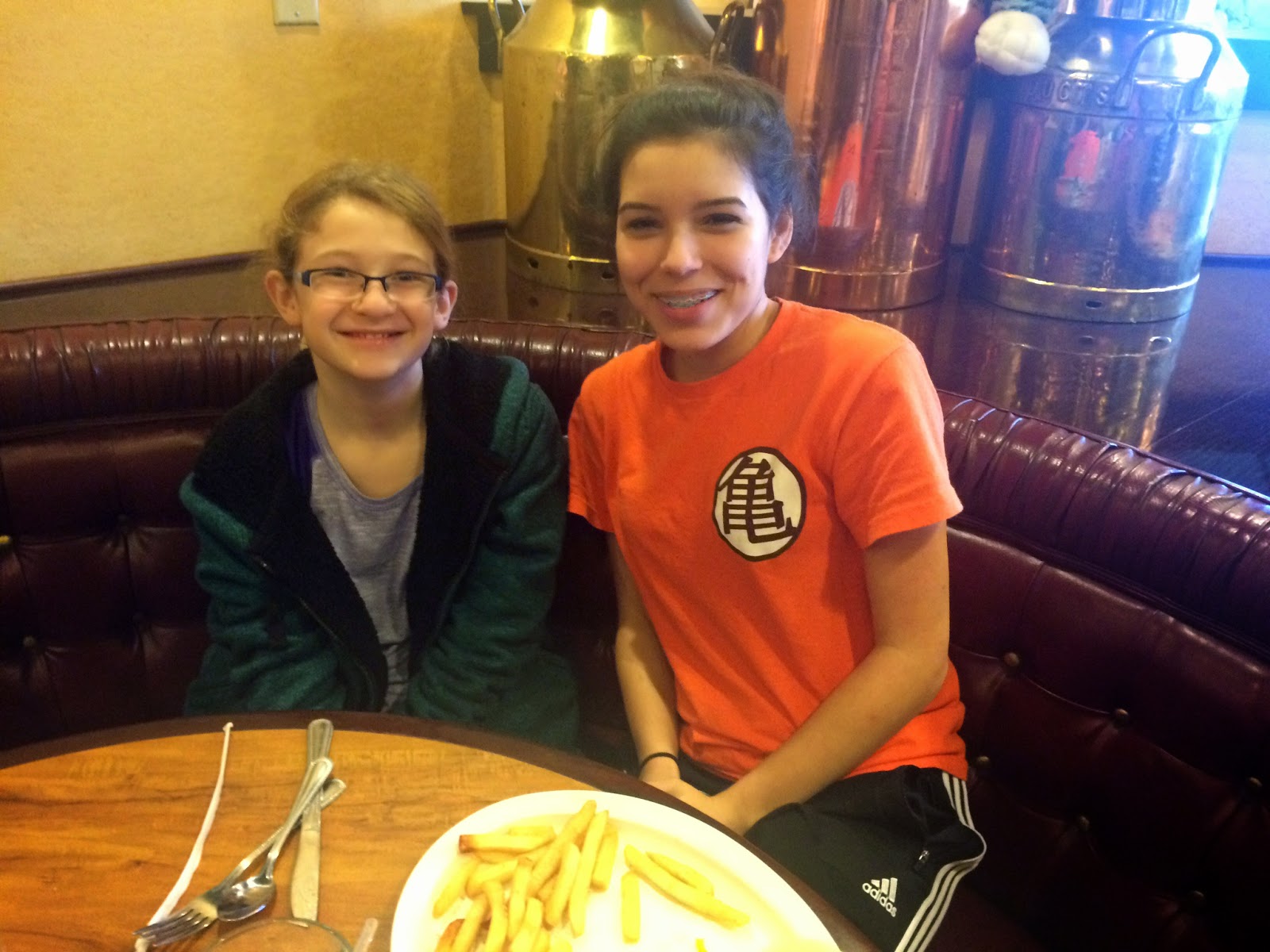 We started our New Years celebration on the Sunday after Christmas when Ian's daughter Margi drove down from Susanville with Sis and my daughter and family drove up from Cold Springs with Alexia - both trips about 35 minutes but in opposite directions.  Because Alexia is ten and Sis is 15 they have never really done anything together - until this trip.  We left the house at 6:00 sharp Monday morning and stopped in Gardnerville for breakfast.  It's a ten-hour trip with stops and the girls couldn't have been more delightful. 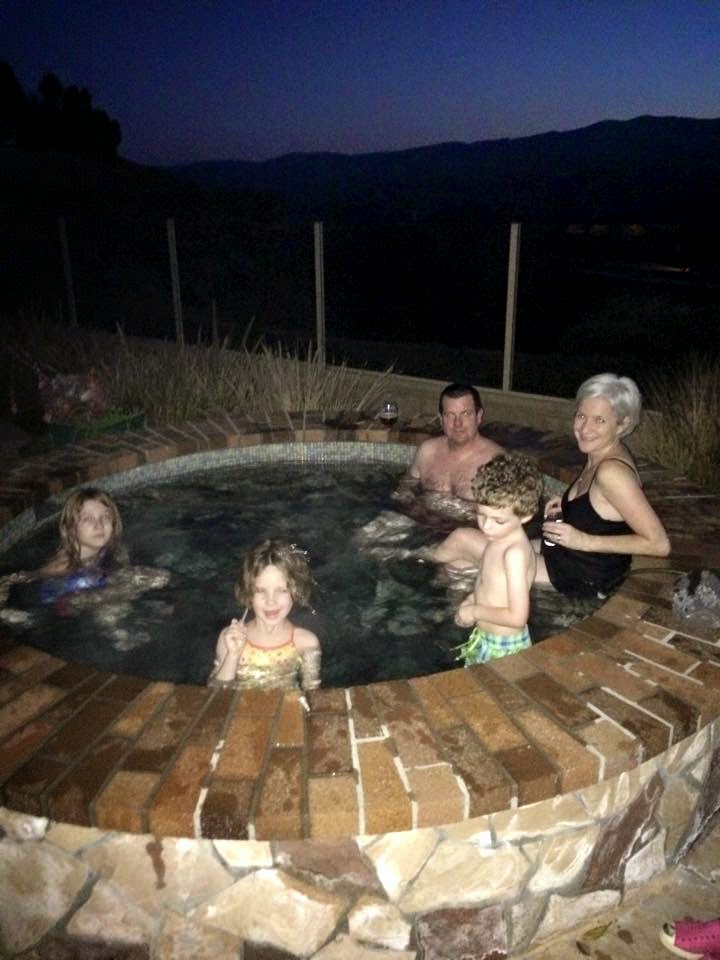 I was too tired to go in the hot tub the night we got to Redlands and Margi forgot to pack Sissy's suit so it was a small group, and my one and only chance. 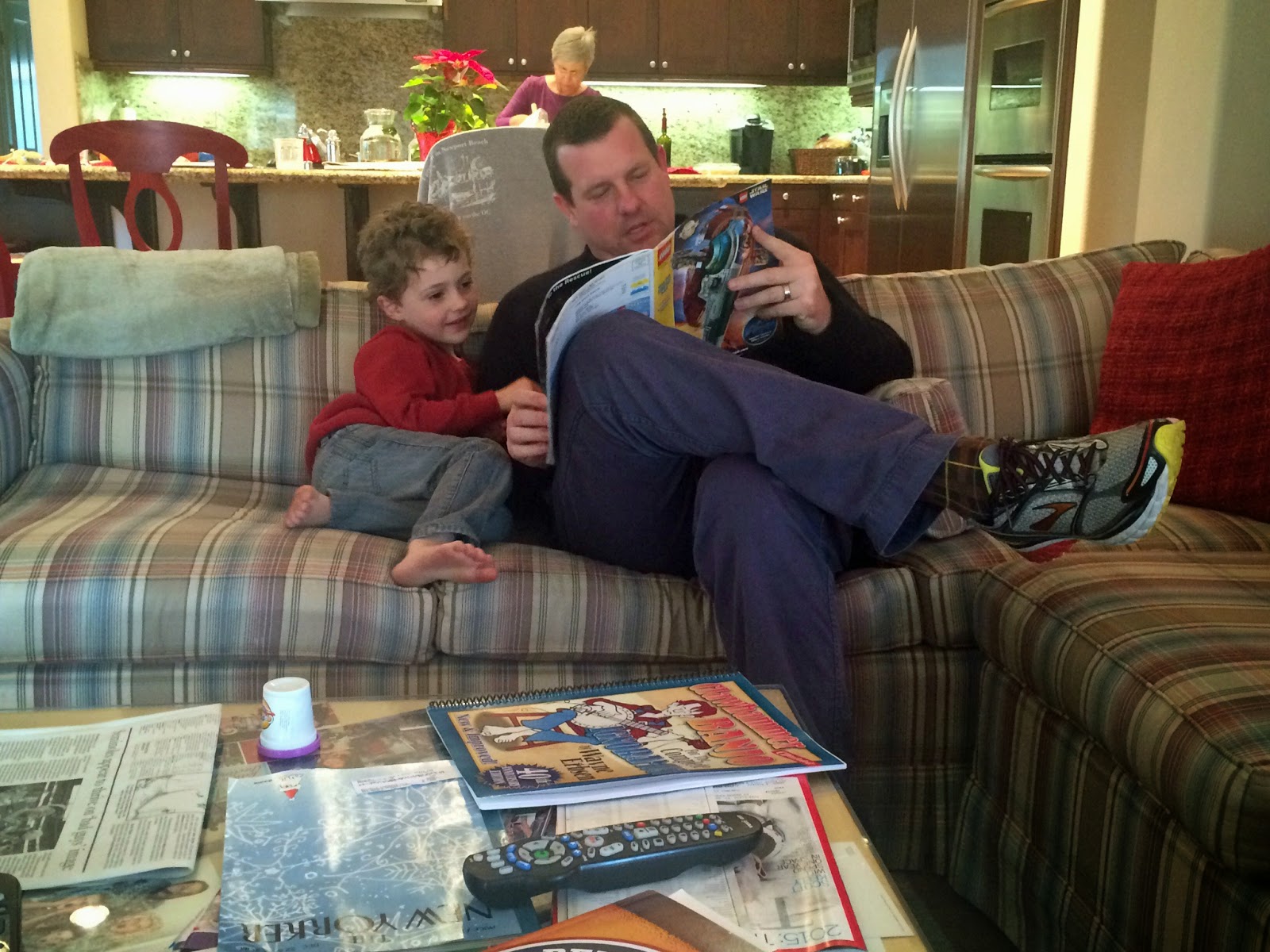 Rochelle's daughter Ali and her family flew out from North Carolina for the week and her brother, sister-in-law and nephew drove down from Utah.  This New Years Eve celebration is probably 40 years old or older.  I've come for the past twenty, anticipating the chance to see family and visit.

Gus's favorite pastime was a Legos catalog, which he poured over for endless hours.  I had forgotten how much my kids loved the Sears toy catalog and would do the same thing with it every fall.  It's all about the anticipation.  He's showing his daddy his favorites and wanted to know what Jason's second favorite was. 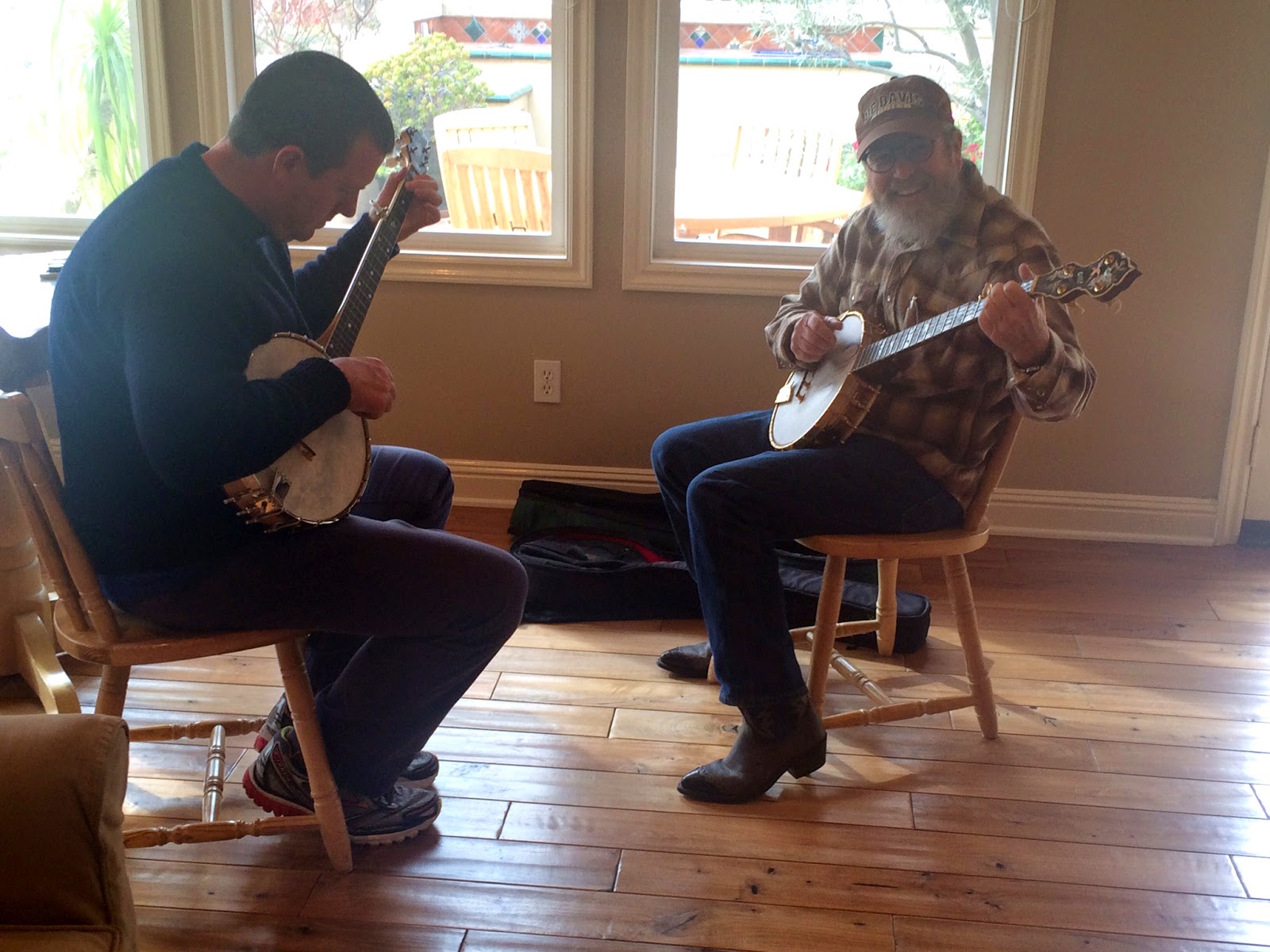 Ali is learning the mandolin and Jason has decided to learn the banjo.  He asked Petey is he'd give him a lesson so Petey showed up with two banjos.  They shame me.  I think it's time to dust off my guitar. 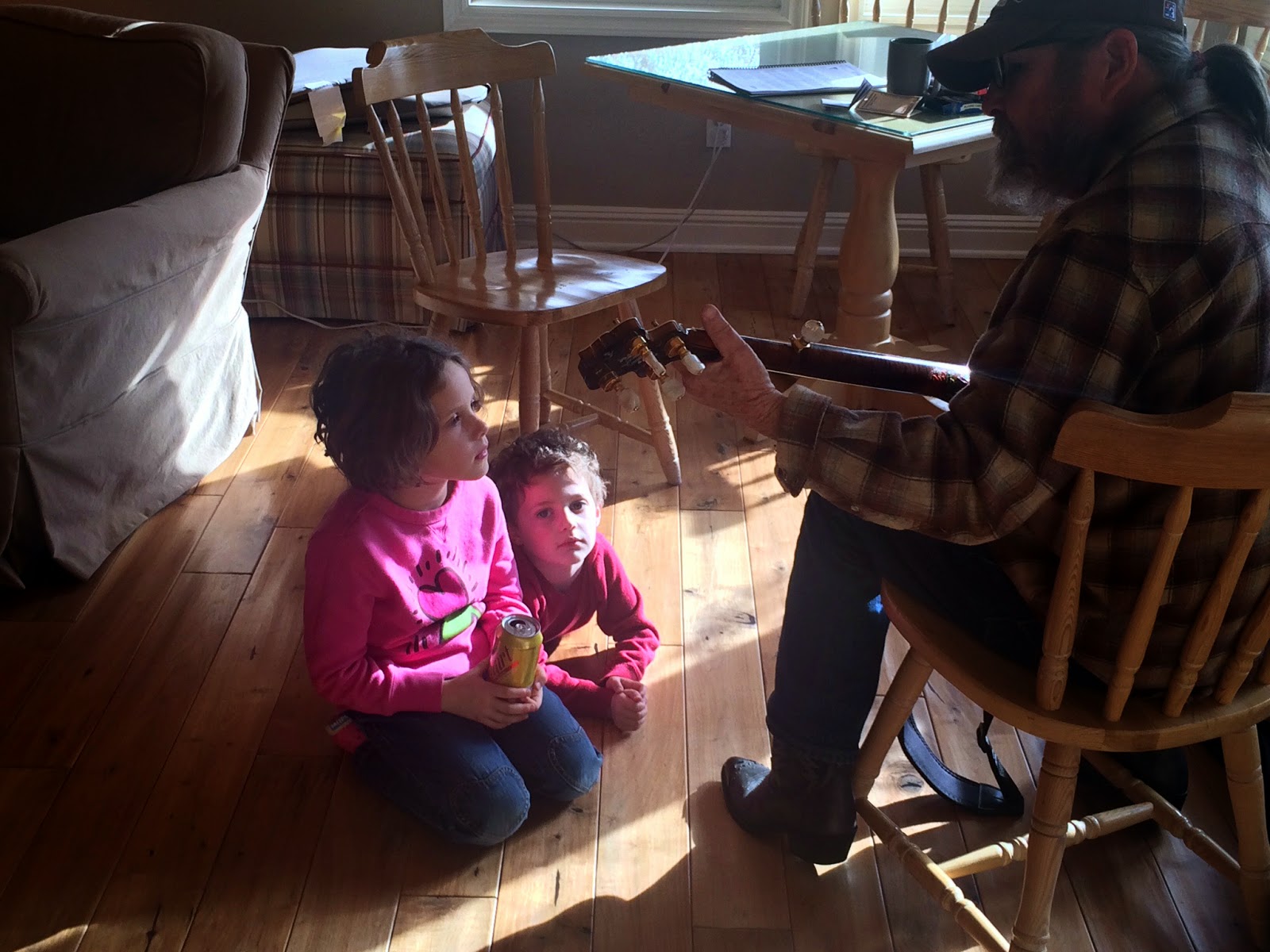 The kids always are enthralled by Petey's music and I suspect they'll be learning instruments soon themselves.  Petey and Ian were on the same gymnastics team at Long Beach State, lo those many years ago.  These are long lived traditions and friendships. 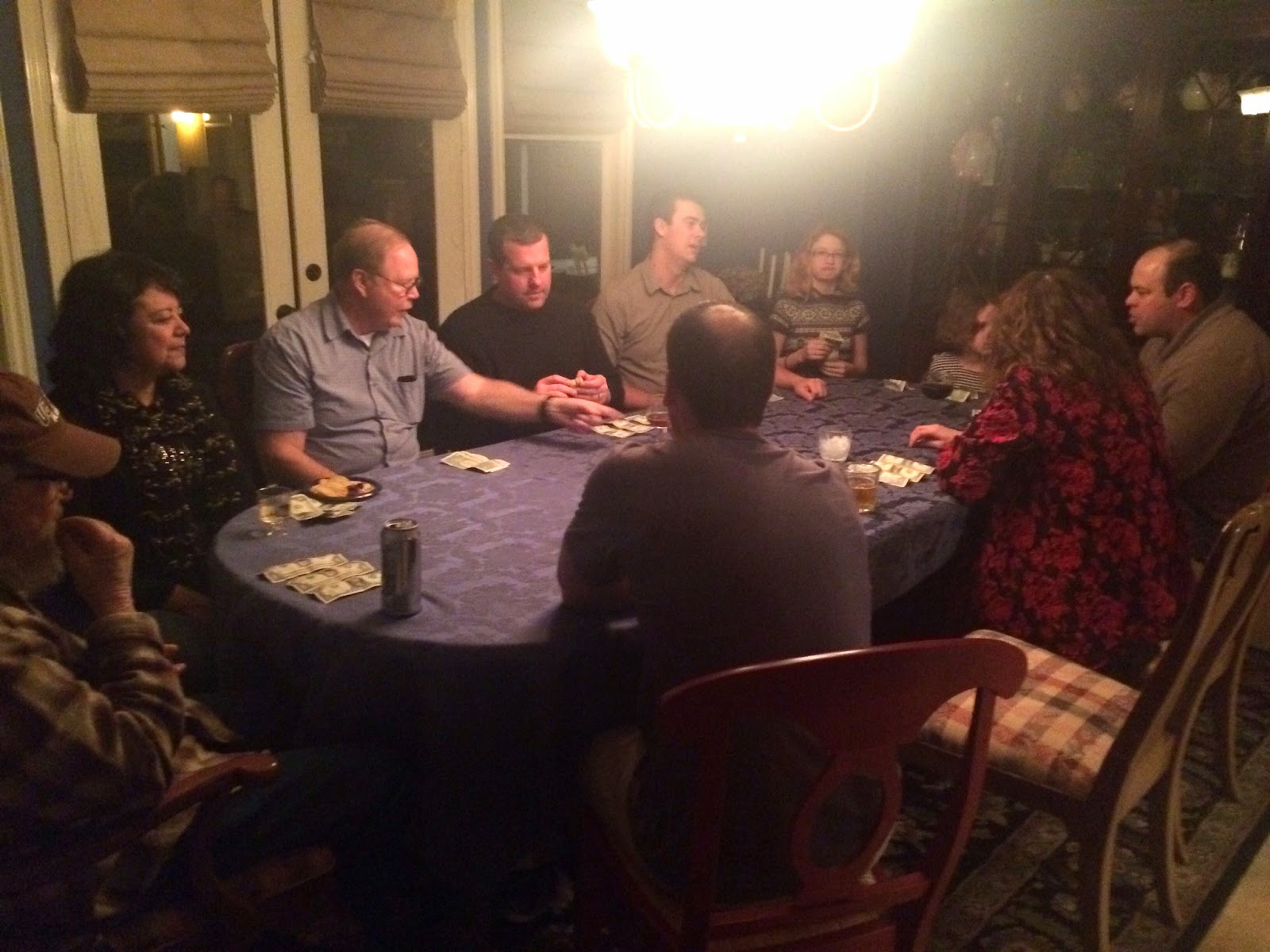 Another tradition is to crowd around the table for a rousing game of Left-Right-Center, a mindless game of dice and dollar bills.  Years ago the rousing game was poker, but sadly a lot of the poker players have passed away.  This was followed by the domino game of Mexican Trains at the kitchen table, which all the kids can play.  We appointed Melissa the game meister and tasked her with keeping us awake.  No one made it to midnight last year.  We even play Heads-Up, a charades game using a cell phone app, but we made it to midnight. 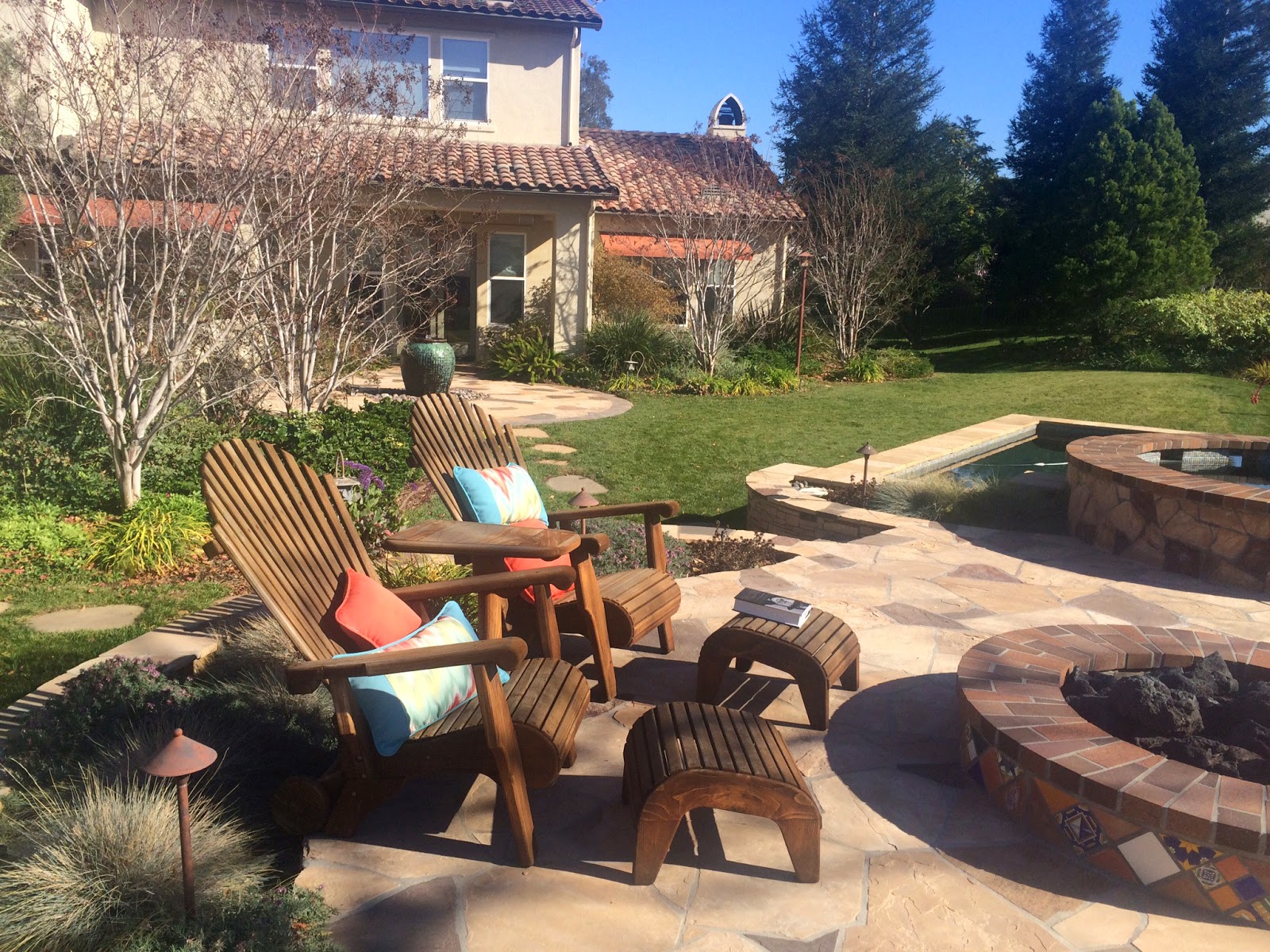 We drove down in fierce wind, like nothing either Ian or I have ever experienced.  At Conway Summit, the highest pass at nearly 8,200 feet, and the descent into Lee Vining and Mono Lake, we had to gear down and slow down to stay on the road.  That crazy wind was pushing a fast-moving storm that deposited snow in Temecula and Hemet - unheard of!  It was pouring rain in Redlands for the first day. However, New Years Day dawned crisp and bright.  Rochelle gave Ian and me a book for Christmas, Carlos Santana's autobiography, so I put on a vest and started the new year by reading in her backyard, or at least until it was time to leave for Gardena to celebrate the first day of the new year - more long lived friendships and traditions.
Posted by Sharon at 10:38 AM