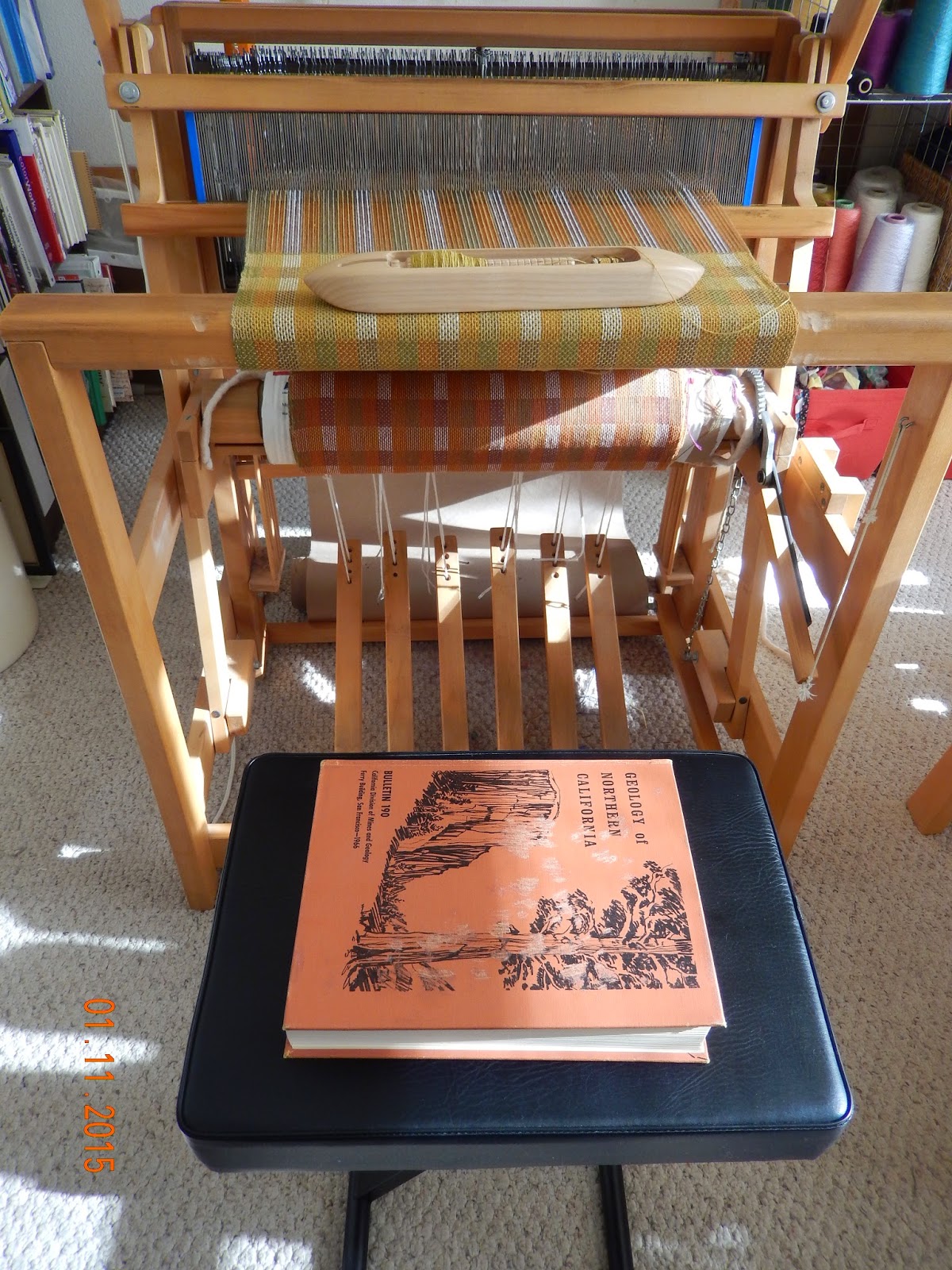 I'm finally finding some time to weave but since I wove so little the last quarter of the past year, I'm having to redevelop those muscles.  Sitting low on the piano stool was creating an uncomfortable strain on my back and shoulders, so I'm letting the Geology of the Northern California raise me up.  I'm turning into my mother!  She always drove sitting on something to boost her up so she could see over the steering wheel. 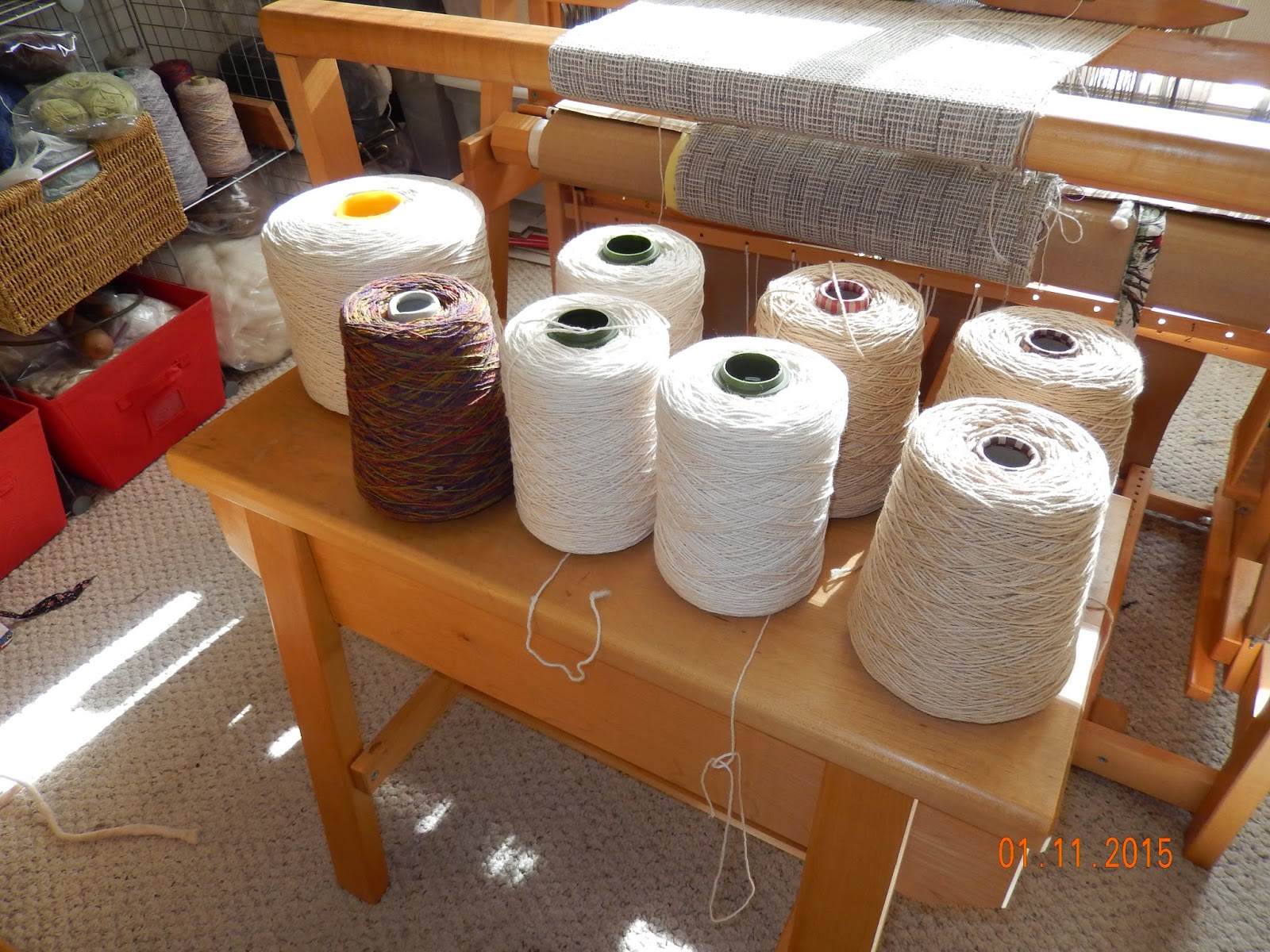 My first order from the Yarn Barn yarn sample club came last week.  I have no idea what I was thinking because now I have more yarn I don't know what to do with.  I thought the unmercerized 3/3 cotton looked really pretty on the sample card, but in reality it's really fat.  I really thought I could weave dish towels with is - wrong.  I have a 2 1/2 pound cone of 3/2 mercerized cotton which was only $8 a pound and I'm pleased with that. 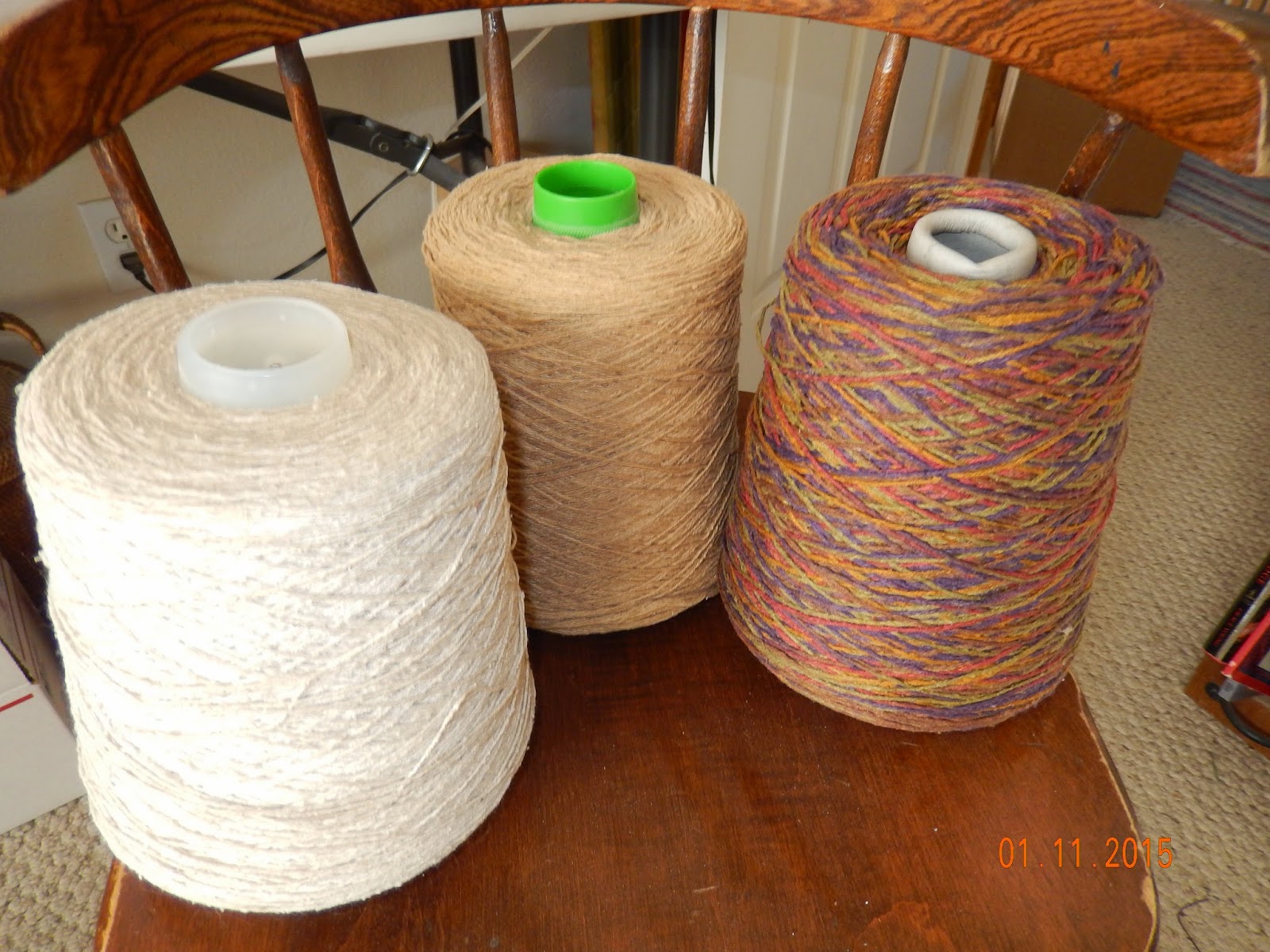 And then there is the cone of variegated silk.  I don't know how I missed that bit of information.  The thought I was going to get a cone of Army green which is what I thought the sample represented.  I'm going to have to read the descriptions much more carefully.  I have these other two plain silks so as soon as I clear a loom, while see if I can produce a reasonably attractive scarf.  I swore I'd never order variegated yarn again and I just did. 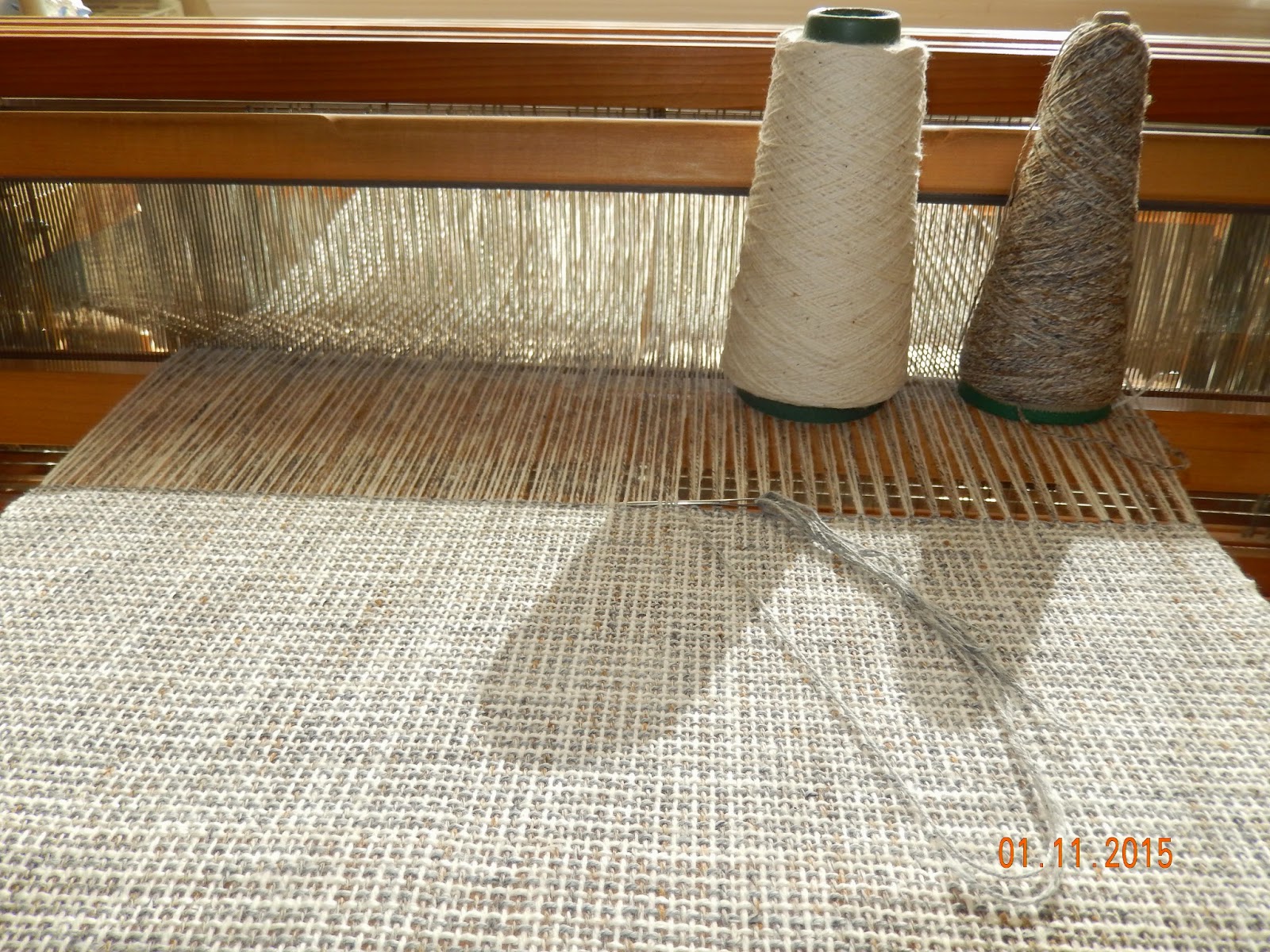 I'm weaving log cabin dish towels on Arthur using 3/2 unmercerized cotton that I bought from my friend Lorene.  The cones were huge but not any more.  I knew I was going to run out but thought I'd be able to use the 3/3 cotton that I just bought.  I'm on towel six and scrambling. 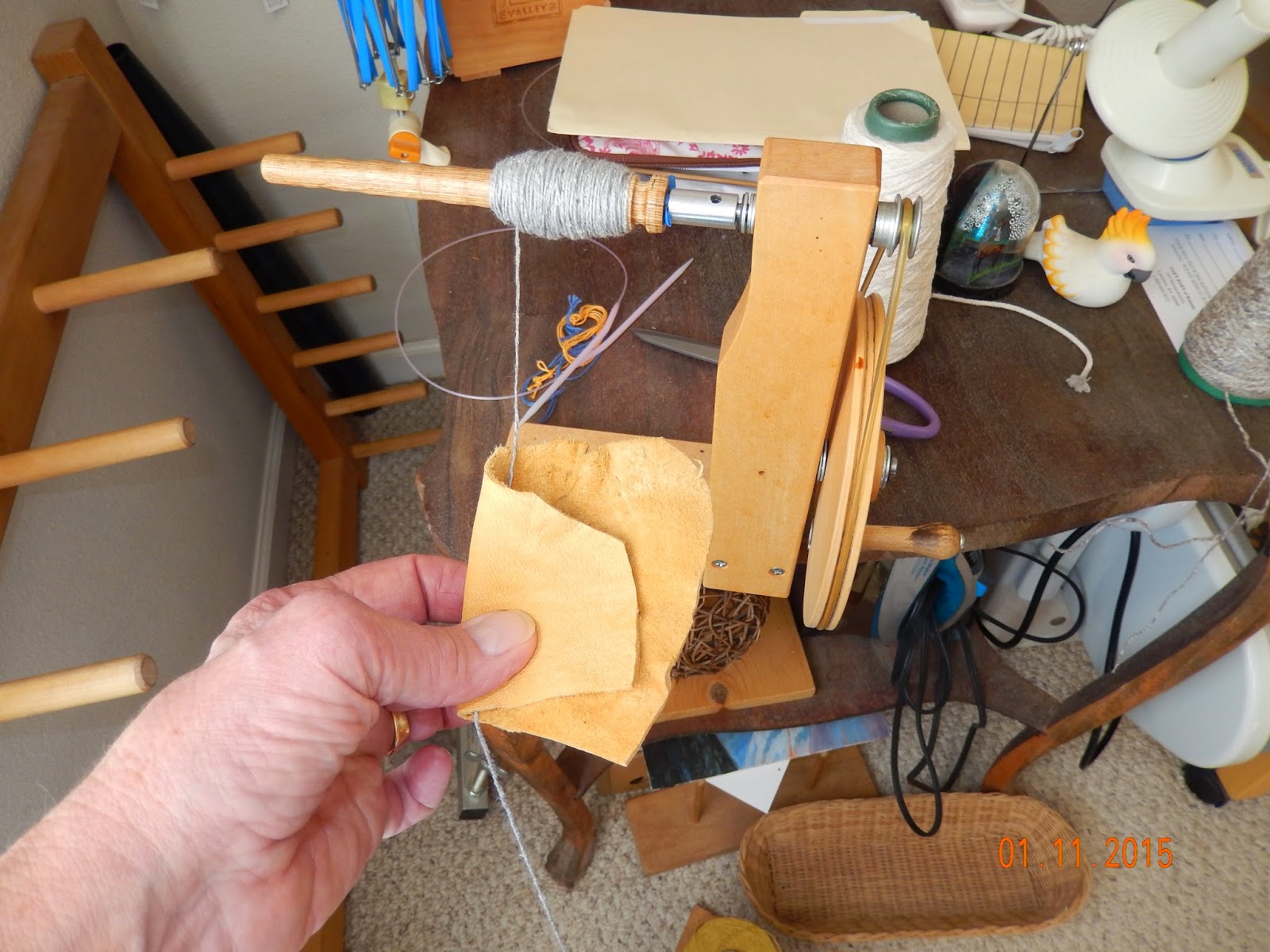 Meanwhile I have been practicing how to wind pirns under tension.  Rae off-handedly mentioned that pirns require this treatment in one of the times I visited her studio.  I've learned a lot from her but never implemented this practice with my Schacht pirns.  I learned the hard way that Bluster Bay pirns absolutely have to be wound on under tension or you can just plan to throw all the yarn away that you wound on one without tension.  I'm using a piece of leather to protect my fingers. 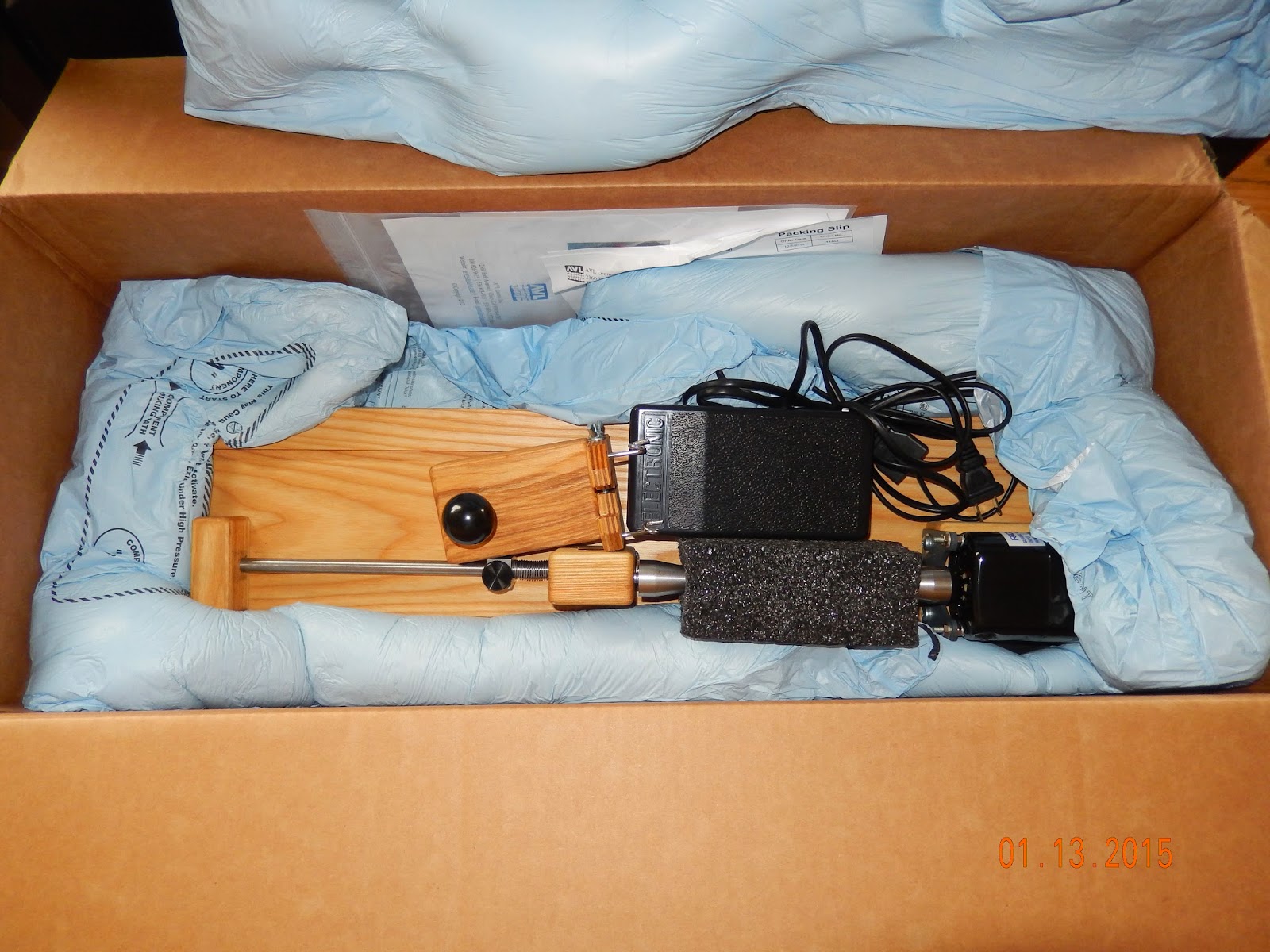 My AVL electric bobbin winder was delivered yesterday, right before I had to leave for book group so all I could do was open it up and look at it. 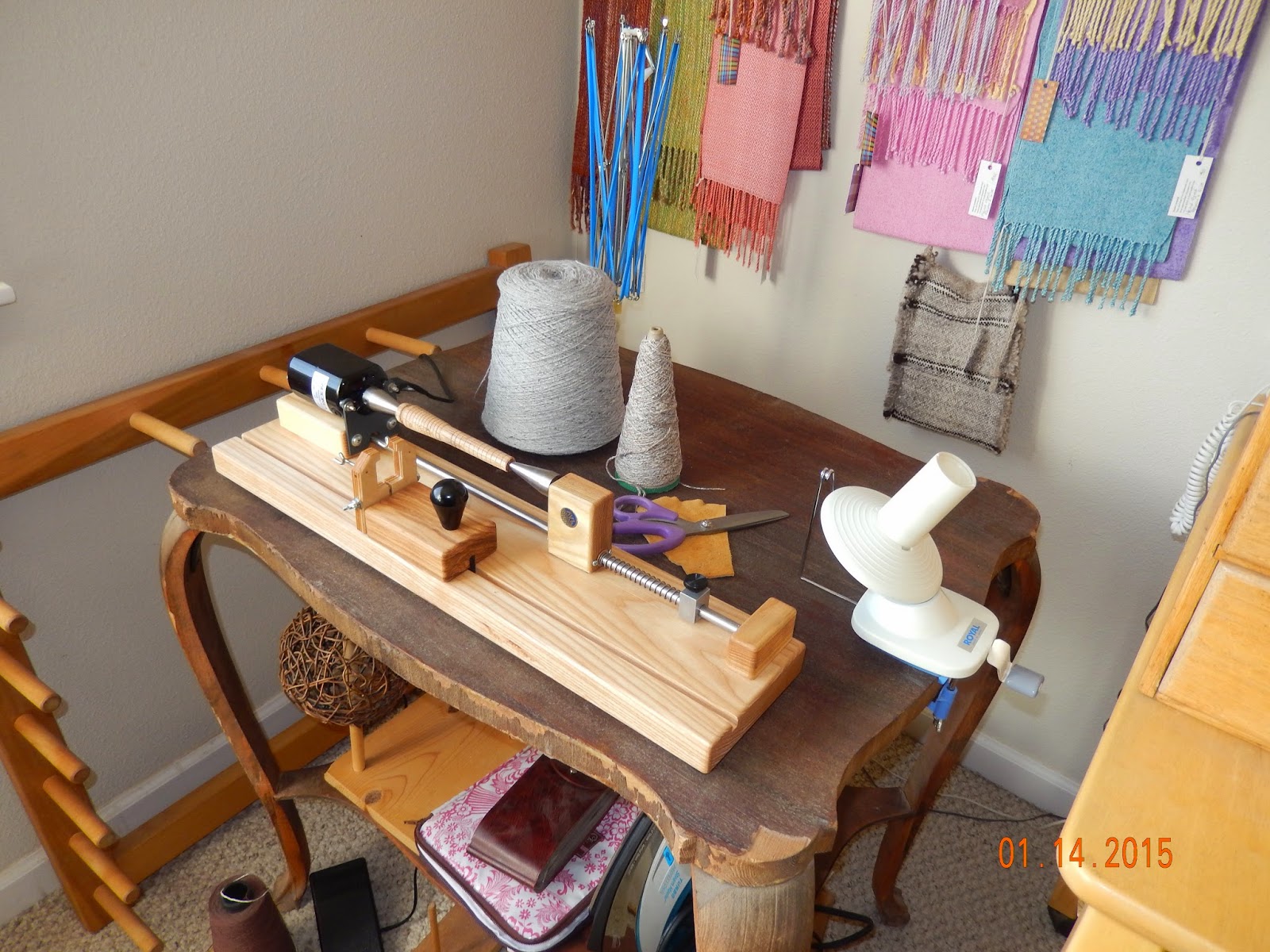 I had an acupuncture appointment today so was strapped for time again but I did manage to move things around in my studio and make a space for the very large winder.  I had to turn the table so the winder can fit across it, and I pulled the table out so the umbrella swift won't hit the walls when I'm using it.  I'm always amazed that I seem to always squeeze out just a little more space in there.  I have two tapestry looms that still don't have a spot.  I have major dental work tomorrow morning so won't get a chance to finish this job until Friday. 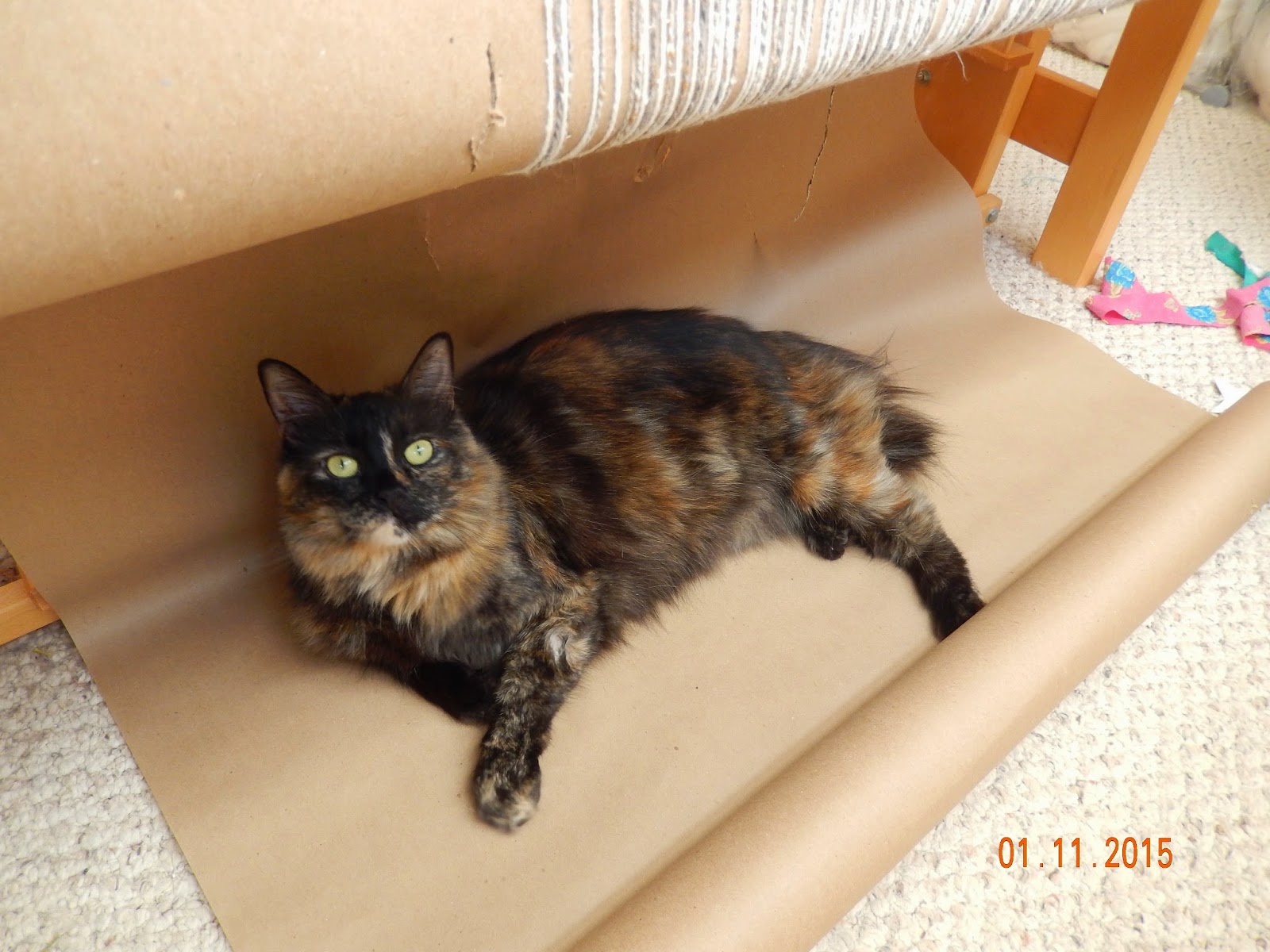 And I'm still struggling with Maddie's love of my packing paper.  You can see the gash in the paper above her head which is from her game of tearing the paper with her claws and fishing through warp threads.  I have a broken warp right now that I'll reattach at the end of my current towel.  I'm going to have to buy a new roll of contractors paper very soon.

For fans of Downtown Abbey and BBC programming, this is the best spoof ever made.  I hope you enjoy it as much as I did.

I hope this is the year I learn to use my loom which I purchased over a year ago! I bought a 1947 Curtis Payton Floor loom 48" wide. 4 shaft 6 treadle. I think I said that all right LOL. Yes that is how green I am to weaving. If I can just get it warped for simple dish towels this year I will be thrilled and start with that. I am learning from a book as we do not have a local weaving store. I mean well but I just seem to take on way to many things LOL. But I know I will eventually get started!

That Downton bit was hilarious! Thanks for posting it!