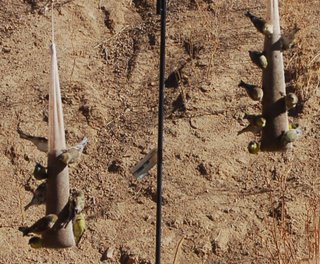 How many gold finches can feed on a thistle sock?! It was nice to be home. Oddly enough, today was a paid holiday for me. October 31st is Nevada Day, but because it conflicts with Halloween, the powers that be decided to make the state holiday this Friday. Library staff who are off on that day received a different day, and I was assigned today. So I’m celebrating the birthday of our state one week early. How did I celebrate? The only thing that I felt compelled to do was make soap, so I sat on the deck for a while this morning and spun. The weather is still quite warm here. Then after the soap and lunch, I decided to go up to my studio and weave a little on my scarf since its been on the loom so long it’s collecting dust. I haven’t been able to make me work on it because I was sure I was going to run out of the colored yarn.

The scarf was our guild’s fiber project this year. We used to always do a traditional fiber exchange but the last couple of years, we’ve changed it so that everyone receives the same fiber to spin and dye as desired. For this year Wes and Brenda came up with the idea of providing each participant with dark brown medium wool, some white medium wool, silk and angora. All the fibers were clean and in a kit so everyone received the same thing. I decided to blend half of the silk and angora with each of the two wools, then I rainbow dyed the white wool and overdyed the dark brown with a light bath of black. Then I wound a three-yard warp for log cabin and set to work. After weaving about ten inches, the light went on. I hadn’t calculated the yardage and I was sure to run out of the dark. So I set out to replicate that yarn with some black Corriedale I have. I’m so glad I did the light black bath because the replicated yarn is almost indistinguishable. There has to be a better way to twist fringe. 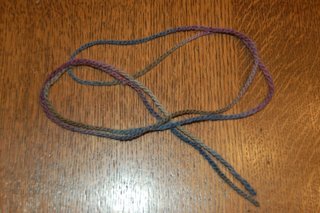 When I got done, this is how much I had left of the colored yarn.

Reading your message made me think about celebrating Nevada Day. Not so much about statehood as about celebrating the high country I have adopted as my home. I will have to think of something suitably symbolic.

Your scarf is just beautiful... how funny to have your own private holiday, though. We usually come over for Glenn to be in the Nevada Day parade at Carson City with his black powder rifle group (Devil Mountain Brigade), then go out to Genoa for the party there, but this year it will be his last workday of the season, so we won't make it.