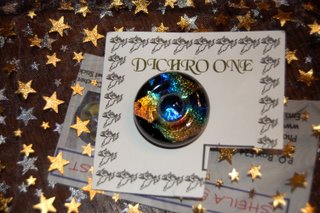 Amy came back from Black Sheep Gathering with a dichroic glass button and said, “Here – design something around this.” And I knew what that something would be when Allison visited me at the library and took something of our gorgeous purse, a felted bag with button closure, pattern by Beverly Glaskas. She said she’s made several and has loved the pattern. She didn’t have any at the store and said she’d get one for me. I didn’t have any yarn for it so didn’t think about it too much. Then we did the natural dye day at Marilyn’s two months ago and I ended up with colors that I thought would be perfect for the bag. But that yarn is currently in a basket in the library display, and they’ve asked me if I would be willing to leave it another month. Still no pattern, still no yarn. 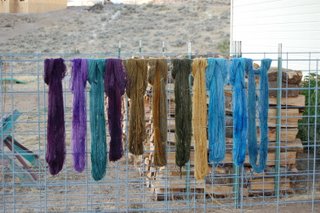 Thursday, my birthday, I came home from work to find that Allison had mailed the pattern to me as a gift. She had no idea it was my birthday. Is that karmic or what?

So on my day off yesterday in a birthday playday splurge, I dyed the last of the Coopworth that have been spinning for months. I also added a couple skeins of Danny, a Rambouillet/Corriedale/Suffolk, fleece that I bought from a friend years ago. It was seven pounds. When I bought it I had no idea just how huge a seven-pound fleece is. I put the dye on the skeins, rolled them up in saran wrap and steamed them, three packets in the steamer at a time. I wanted uneven color so laid the packets on their sides so that color would drain to one side. It worked and it’s either going to be an asset to the felted bag or it’s going to be a terrible idea. 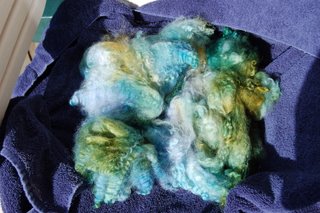 At the bottom of my bucket of soak water, I put a handful of white Border Leicester and when all the skeins were wrapped. I put the fleece on a piece of wrap, poured the remaining dye on it and then steamed it too. I love the colors and can’t wait to spin it up. I can’t decide if it’s going to get one pass through the drum carder or if I’ll flick card it.
Posted by Sharon at 3:51 PM

Happy belated birthday, hope it was a great one for you. Your dyed stuff looks great, 7lbs that would take me forever and a day to spin. I love the clean-up roving I'm going to have to try that the next time I pull the dyes out. I think I love that one the best - I bet it's going to look so nice once spun up.

Wonderful colors... and they will go so well with the button. Glad you had a fun day for your birthday.