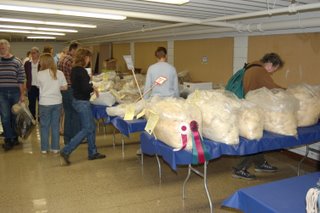 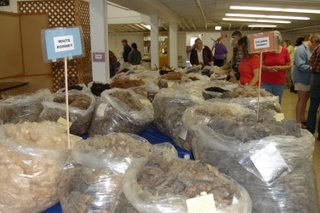 The wool show is smaller than at Black Sheep Gathering and there were a lot of llama fleeces which I found surprising – don’t know why since we bought out llamas from . Our two have a great micron count, and while I don’t spin their fleece, I do value them as guard animals. I’ve come to realize that I don’t much care to spin hair – llama, mohair, alpaca – just a personal taste and perhaps transitory but nevertheless the taste of the moment. Laura had just introduced us to Mary Beth Bullington when the word came that the wool show results were in. Ian ambled over with Laura and I ended up trotting over with Mary Ann to see what the judges had awarded. It was really gratifying to see her wins since all of our boys are trickle down from her breeding stock. 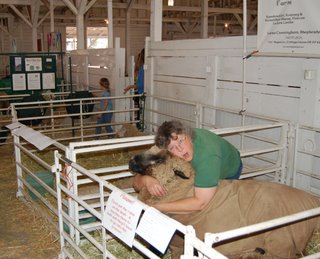 We were so happy to see Laura – miss her tons. She was getting ready to show her ram . She called later to tell us that he won best of breed for CVM patterned Romeldale

What a cute photo... I'd hug that lovey too! Sounds like you had a very fun time.