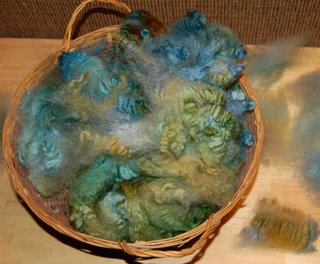 The locks are lovely, and I’m reminded why luster long wool is called luster long wool. I was taken with spinning Border Leicester wool from the beginning. The other morning I was trying to think how it came to my attention and realized that it was Diane Soucy. She had sent off for some locks from different shepherds she had found on the Internet. We were eating lunch at the In-and-Out-Burger in en route to Robin Foquette’s ranch in Cool, for her spring shearing. Diane had some samples from Ralph Groefsema in , who, in fact, just this year announced his retirement from shepherding. I bought a Jacob fleece at the shearing, then went home and called Ralph for some samples of my own. Over time I think I probably bought a half dozen fleeces from him. But then I got sidetracked by my inability to turn luster long wool into a garment that satisfied me. It’s just not the ideal sweater yarn. 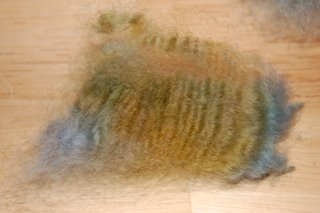 I hope you can see the shine on this lock I have two partial fleeces left from those that I bought from Ralph and am finding that I love the way they look in felted bags. They have a halo, almost like . I don’t know if that’s true of all BL or just the ones I bought from him. He liked to dabble with a little cross breeding here and there.

The locks were dyed with leftover dyes from my dye day, so I expected that the yarn I made from them would be a nice fit. My disappointment is that I had already used up all the purple so that’s absent. I had anticipated variegated colors and this yarn is pretty boring, really.

I love that skein! Definitely NOT boring!

I love the shiney colors... nothing boring about that!