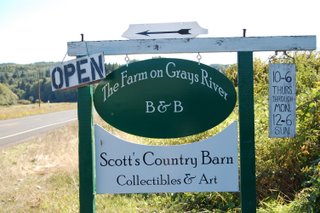 This is the sign you’ll see when you get to the bed and breakfast that my brother Bob and his wife have in . My sister-in-law Georg keeps a gift shop in the barn with antiques and Mexican art. My brother, in addition to being a compulsive landscaper, has a flock of sheeps and goats of various mixtures and varieties. Last year Georg traded B&B time for a black ram who provided great amusement when his little ram self chased all the big girl ewes. They weren’t laughing this spring when they had 28 black lambs on the ground. Nice bonus. Bob has fenced with hot-wire between pastures so that they pass by the guest rooms. 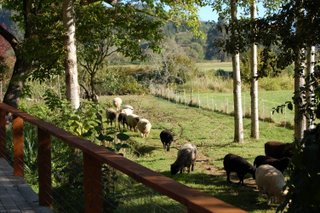 When we were leaving last month, Bob came back from the animal barn with a gunny sack of black fleece. He is always interested in projects and outcomes and thought I might like to try some of the fleece, just because. I should have known when it didn’t stink in the car that it was lambs fleece and couldn’t be a full growth. Bob and I come from a long line of story tellers and he loves a story even more than I. I got to thinking that he would really enjoy a hat from this fleece, if nothing more than for the story. I sat on the porch one morning and sorted through the fleece bits and parts until I thought I had enough to make one hat. 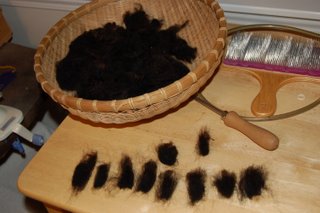 I don’t think any staple exceeded 1 ½ inches and when I tried to drum card it, half of it ended up on the licker. Spinning it was like working on drier lint with the texture of brillo pad. I am a rank amateur in long draw and since that was the only way this short fiber would spin, coupled with the harsh fiber and my technique, or lack thereof, I ended up with a yarn that measured four stitches per inch – hardly hat yarn. 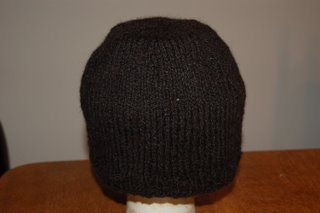 I’m going for the story, not the hat. I don’t know what the optimal use of the fiber of this breed would be and since I didn’t have a representational sample, I won’t know because I don’t think I would willingly work with fleece again. Bob will enjoy the story. This I know.

wow, pretty impressive. I bet now you could collect and spin kitty hair and make some mittens!