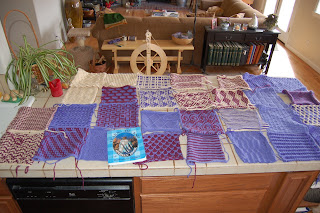 Years ago Allison developed a program to develop our knitting skills, modeled on one the Foothill Fiber Guild did. We would use the book, Learn-to-Knit by Barbara G. Walker, to teach us stitches we would never try otherwise. In the end the sampler of squares would be assembled into an afghan. I found the schedule in my book today. The first squares were due on June 2000 and the last on September 2001. It’s a good thing this project was in a box because the yarn would have been as dusty as the box lid.

I completed 30 of the squares with a growing uneasiness at the accumulating weight of the project. I stopped when my squares filled a Xerox box and I wasn’t done. Part of the problem is that I selected Brown Sheep Lamb’s Pride Worsted. It’s a great yarn, but not for an afghan. I spent the better part of today frogging 14 squares, starting with the ugliest and then ending with squares with purple. I realized that I hadn’t purchased the colors evenly and I have a definite shortage of purple. These are my worms, which I soaked and hung up stairs to dry.

I decided to try dyeing some of the knitted squares as well as some skeins of the natural color. I used Gaywool Dyes in cornflower, hibiscus and mulberry. I applied dye to the two squares and steamed them, though so far I can't see that the dye affected the periwinkle square at all. I dipped the natural square into the three colors and it’s pretty, but a little pastel. I hot-poured the rest of the dye on the skeins, and the pot is sitting in the garage overnight with the dyebath. Tomorrow~

These are two of the ugliest squares left, if that gives you any idea how ugly the ones were that I have already undone. Granted, it wasn't the best color selection. I called Kate Painter who owned Paradise Fibers at the time and we did it over the phone. I was limited because I was buying whatever she had as seconds.

On the other hand, these are two squares that I think are really pretty. As for their application to wearable garments, I'm thinking, not so much.
Posted by Sharon at 6:03 PM

RE: the swatches at the end. Well, there's always the possibility of using them as pattern insets in a garment. Say a wide front border on anotherwise plain cardigan. Or side fronts for vests. Both of those reminde me of patterned weaving...which has the same limitation.

Perhaps after a couple trips through the washer they could be largish coasters.;-) I still have all 3.5 squares I completed.

Hmmm. I still have all of the squares we knitted in that project. I keep thinking that a good fairy will come into my studio some night and crochet the whole mess into an afghan. Probably wishful thinking.