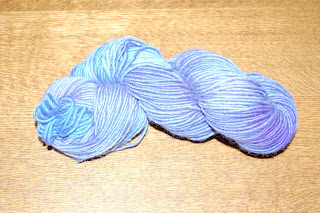 Also known as live and learn. So I put my skeins into the dyepot of vinegar water and poured the mulberry solution across the middle. I peered into the pot, thought it looked pretty cool and poured the cornflower solution over the right part of the wool, followed quickly by the hibiscus on left, and then left it to cook for about a half hour. Did I follow the directions that said, it takes four minutes for the dye to strike so wait that long before adding the next color? I already said that I didn't. The lesson learned? Cornflower, hibiscus and mulberry make periwinkle. Nice, but I already have many skeins of that color from the recovered afghan project. It's slightly varigated so I've decided to use a purple contrast and see what kind of bag I get. I watched a Tivoed episode of Knitty Gritty last night on knitted bikinis, not because I want to make one or would wear one, but I was interested in the use of shaping. I've decided to finish the top of the bag with i-cord bind off and bottom in the same color - we'll see. 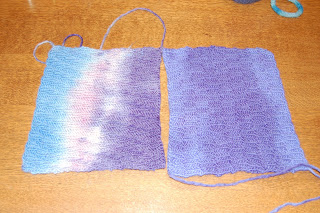 More live and learn - I tried dipping the natural-colored square on the left into the three colors I was using, but the solutions were too dilute to produce colors of conviction. The already periwinkle square on the right looks like something got spilled on it. Disappointing, but at this point, I have enough recovered yarn to make bags and that's more than enough to make up for the let down of the dismal dye results. I have more skeins to dye and this time will follow the rules.

Amy tells me that today is the most depressing day of the year, according to NPR. They claim to have factored in weather, holiday bills coming due, and a number of other factors. It's dark when I leave the house for work and dark when I get home. Tonight when I closed the gate my car thermometer read 25, which is ten degrees more than it was a week ago though the air is still achingly dry.
Posted by Sharon at 8:28 PM