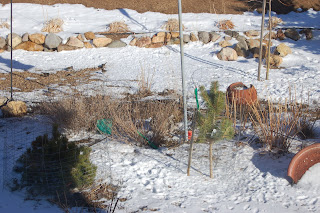 Yesterday afternoon I looked out our bedroom window to watch all the birds at the feeders. Then I noticed some activity at the base of the one of them. There's a rabbit behind those twigs. They hide so easily. They're like the coyotes - unless they move, I don't see them. I'll bet the rabbits wish the coyotes didn't see them. Those are ground-feeding Junkos in the back on the left. 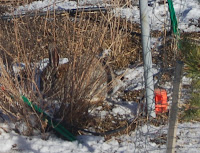 The rabbits have eaten the perennials down to sticks. The two little pines are inside rabbit guard to protect them, so I think it’s ironic to see this little guy is munching the fallen bird seed, next the rabbit guard. I guess that shows it works. It's also ironic that he's behind what's left of a lavendar plant that the rabbits have pruned for me. And they fertilize while they work. 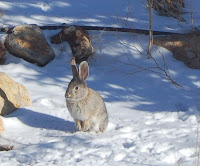 I tapped the window to see if he'd move so I could get a better shot and he obliged me.

This morning he was back at the base of another feeder, this time sharing the seed with doves. This is all the snow left, after a storm to remember, just the day before yesterday.

The newspaper today said there were 95 reported accidents, one fatal, from the frigid temperatures that followed pouring rain. Both Ian and my daughter called me to report the road conditions from where they were, and even with their help, it still took two hours to get home from work. I passed a single car rollover at a curve on our two-lane road just as the ambulance was leaving. Several times I was the only car able to negotiate through the mass of stalled vehicles. Even at 20 MPH, my car would slide when I applied my brakes, so I quit using them. I liked my Subaru Forrester before, but now I love it. It needs a name.

I have decided to name her Eleanor, after Eleanor Roosevelt. She wasn't much to look at, but she could rise to any occasion. I think the name is fitting.

I love your rabbit picture. I would have thought you would have jack rabbits there, but this one looks definitely rabbit rather than hare!

You are right about the Subaru. Igor and I have gone through some pretty tricky road conditions without incident. Eleanor is a very good name.

You did a good job capturing that rabbit! The driving sounds treacherous; hope today was better.