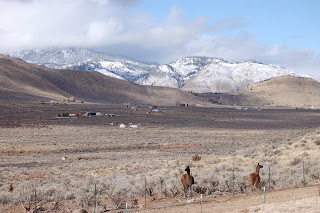 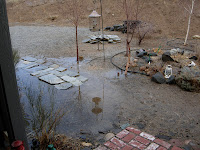 We've had moisture for three days now and I was thrilled to wake up this morning to see snow. It's been raining on top instead of snowing. Carolyn comes to the guild meetings from Truckee and reported that it was raining when she left home. It's not a good year for skiers. Lake Campbell continues to grow. That's as far as I got laying the stones before winter and other things set in. I'm glad to see that they work as I had hoped. Those things are heavy and it makes it tired just looking at them. Lifting them out of the truck is what ruptured the three disks in Ian's back. With that in mind, I drag them. 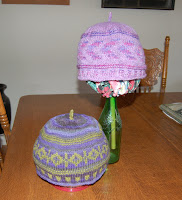 I finished two more hats so will get the hats sent off to the Brewery Arts Center when I go back to work on Wednesday. The post office is right on my way. It's the first time in my life that I have had a convenient post office.

They're been a great mindless project during my house arrest. Everything is green and purples and shades of. It's clearly time for me to buy more dyes, and after much deliberation, I've finally decided what I'm going to buy - more on that later.
Posted by Sharon at 1:59 PM