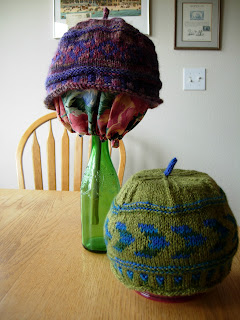 I finished a couple more hats and have decided to do two more so I can send another half dozen to the . I checked my inventory list and see that I only have about a dozen hats left down there. Besides, they’re fun to knit and I like to see how the different colors work up together. I thought I would like the green one a lot and it didn’t turn out so hot. I picked it as the contrast yarn because I had rainbow dyed the roving with the same dyes that I did the solid colored yarns. I then Navajo-plied it and thought because it had the same green that it would look cool but instead the green got lost. I can’t wait to see what the next hat looks like.

The sweater is an absolute disaster. I carefully blocked the pieces and sewed up the side seams. What I failed to do was wash my swatch or I would have calculated the measurements differently. The armholes that I carefully measured at nine inches are closer to a foot and the sleeves simply don’t fit. I’ve ripped them back and will knit them longer but I have a feeling the final sweater will fit Goliath. It’s a jacket so I was okay with loose – this is way beyond loose.

After the wasp incident, I went back upstairs and finally found his unrepentant self and sent him to reside in the septic tank. I can’t believe that six months before my 60th birthday, I who have never ever been stung by an flying insect in my life, get stung, not once but twice by the same miserable creature. I mean, what do wasps do anyway? They don’t make honey and as far as I can tell, they live to sting. Anyway, that run of luck is over.

fwiw, our family suffered heavy wasp invasion last summer. The casualty count:
me - twice in one flurry
Morgan - once or twice
Lola - two separate occasions, poor baby
Dog - once
Wasps - many hundreds dead in traps and spray-poisoned while they slept in their nests by yours truly in full protective gear

worst wasp season that I can remember in my 28 Reno summers. Ugly

They're getting into the house in large numbers and we still haven't found their source which is why I'm ready to call an exterminator. We've done traps and bombs. The sting on my knee still bothers me since it was on bone and there's no circulation to the spot. Why are there wasps? is moving closer to the top of my list of ten things I'd like to ask God.