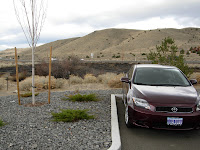 Bad News: This is where we employees park and right behind is the charred remains of the fire that someone set last night about 10:00. I became testy by late afternoon with the clever quips about unexcused fines, charging for damaged books, etc. I don't think arson is funny. Why does everyone want to make it into a joke. 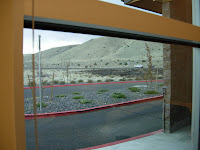 I took this shot from the staff room - the fire was close. I am so not ready for another season of fire arson. Ask the families of the twenty homes damaged by kids "playing with matches" last week. We all left tonight with sore throats, blah, blah, blah - whining is never attractive.

And sparing you photos though I will show them if infestations recur , this the news from today on the insect front - you have no idea how disgusting they are:

Mormon crickets have begun hatching in northern Nevada, marking what state agriculture officials say is the longest infestation in recent memory. Officials say Mormon cricket infestations generally last two or three years. This is the seventh the large insects that munch their way across the landscape have invaded northern Nevada. Made famous by nearly destroying the crops of Utah's Mormon settlers in 1848, the insects eat lawns, gardens and crops. When starved for protein and salt, they eagerly gobble up one another. At the infestation's peak in 2005, 12 million acres of Nevada, stretching from the California to Utah state lines, were covered with crickets. Officials estimate 8 million to 10 million acres were infected last year.