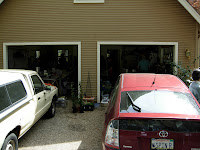 This is Sue's two-car garage. Inside are three large tables, twenty women, two sets of eight tubs of dye at a 1% stock solution - one set for protein and one set for celulose, lots of fiber, brushes, plastic wrap, buckets, water, water, water, and enthusiasm. 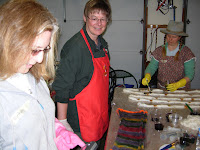 Birdsong and Allison are admiring my skein. I'm admiring the machine-knit blank that Allison is dying. She purchased two of them from Nancy Roberts (available on her website), is dying them exactly the same, then will unravel them and reknit the yarn as socks. 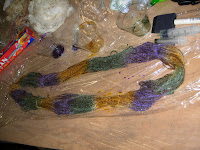 This is my skein that they're marveling over - hah! I spun it from Brown Sheep wool/mohair combed top, which was brown and white. I hope the colors are as rich after the colors set. This is one of eight dye projects that I did today. We started dyeing at 9:30 and Allison and I were done and back on the road home by 3:00 with a leisurely lunch in the middle. The day was so nice that we were able to eat outside - tomorrow it's forecasted to storm. 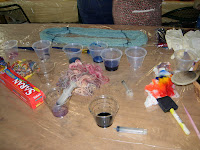 I took this picture after clearing out my work area for the next project. Note the partial cups of color. Lindsey had a creative use for them. See the fiber in the center of the table. Those are mop-ups. She had at least a dozen of them going on the tables. I had a couple of handfuls of clean raw fleece. I hope they turn out as cool as her skeins. 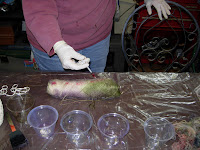 More crazy Lindsey stuff. She had just poured an abandoned cup of dye into a skein she had soaked in vinegar water, and now she's applying syringe-fulls of various colors. She filled an electric cooker with fiber which tripped a breaker, but it was time for us to leave, so we didn't get to see how that fiber came out - there was a lot of it so hope it turned out well. 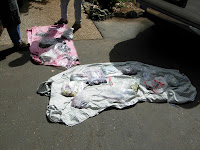 This is the first packets of our finished work. I'll bet Sue's power box was absolutely sizzling with all the cooking we did. Because we did trip her circuit breakers, Sara suggested that we steam our packets again when we got home. All eight of mine are re-steamed and cooling in a laundry hamper in the garage. It is taking a huge amount of will power to leave them out there and not peek!!!

What a great day - what a great group of women. What makes fiber women so wonderful to be with?! Thanks, Mom, for teaching me to knit when I was nine. She was one of us too, you know.
Posted by Sharon at 7:15 PM

I had such a good time, especially getting to hang out with you in person! I am writing my post right now and it was funny to see you beat me to it; my re-steamed packets are going through their soaking-in-suds stage. We have to do it again soon.

How fun! It would be so nice to spend a day with friends dyeing, chatting and learning. I must plan a day like it soon. We have Sara coming our way in 2008. Can't wait!

Wow! Wish I could have been there! I am soon to be temporarily one-armed and even if I can't spin or knit, dyeing might be a possibility. How about a dye-day for the elbow-impaired?