Socks and Yarns: tales that is 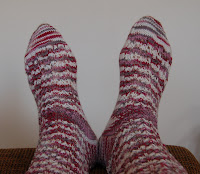 And now there are two. Amy asked me yesterday at our KIP lunch on campus if I would use the same lace pattern for another pair of socks and I said no. But now that I’m done, I think I will, but in a solid color. The pattern is called Little Arrowheard in volume 2 of the Harmony Guides. I swatched this yarn about four ways, and this is the only thing that didn’t produce diagonal clumps or stripes. I think I’m done with variegated sock yarn for a while. The toes are drawstring. When ene asked everyone to share a secret for her contest, I should have said, “I don’t know how to .”

This is some sock yarn that I dyed – badly. I didn’t catch on to the need for vinegar at first - the first four years or so. I belonged to the Robin and Russ yarn club and purchased about four pounds of undyed 80/20 wool/nylon sock yarn a number of years ago. It came in four ounce skeins. I tried to rainbow dye this but it’s more of a heather and quite blah. I have another four ounces upstairs that turned out downright ugly and will have to be overdyed. I went back to my volume of The Harmony Guides and after several swatches, chose Double Eyelet Rib. I think it’s going to be a good sock pattern.

On a different note, I posted yesterday about a debut novel that I enjoyed. I’ve read several debut novels that I’ve enjoyed, so thought that I'd pass some on to you.

Cotton Queen by Pamela Morsi - picked up at a bookstore in the Ontario airport.
Center of Everything by Laura Moriarty - from an independent bookstore in Davis when Amy, Eileen and I went to Lambtown USA.
Three Junes by Julia Glass - from the author at the Public Library Association conference in Boston last year.
Brick Lane by Monica Ali - from the library used book sale.
My Year of Meats by Ruth Ozeki - my niece put it in my hands at a Barnes and Noble in New York, saying that it was one her favorite books so I bought it.
The Namesake by Jhumpa Lahri - my niece had given me her collection of short stories for Christmas.
Crossing California by Adam Langer - Christmas present from Ian.
Life of Pi by Yan Martel - Christmas present from Ian.
Time Traveler's Wife by Audrey Niffenegger - Christmas present from Ian.
Posted by Sharon at 3:02 PM

Lovely swatch. I actually think I have some of the Harmony Guides around somewhere but never considered to work any of the patterns up into a sock! The colors in the swatch a subtle, and would appeal to an earth color person I think.