My first transgression of 2007 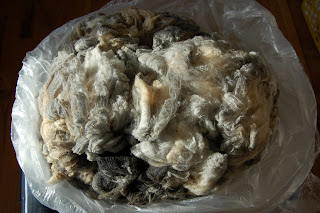 I bought this Merino fleece from Wayne today. I just couldn't capture all the colors, no matter what I did. I've never seen so many colors in a Merino fleece - it ranges from white to black. I swore I wouldn't buy anything this year - this is my year of stash reduction. But Wayne came to the Guild meeting today with fleeces and also the announcement that he is moving to Oklahoma this summer to begin teaching high school agriculture in the fall. I am so thrilled for him, but at the same time, it's hard to believe that our Wool Pimp will be gone. He has been such a huge part of our wooliness and the Nevada State Fair program. I am so excited for him because he gets to go home. He came here to go to school and never left.

These are the hats that Wayne commissioned for his nieces and nephews last Christmas. He's really excited that he will living so near to them and his parents at the same time. He told me today that the hat on the bottom right was worn my his nephew in the McLean County Fair last month. His nephew wore the hat and led his other brother's Shropshire ewe in the Wool Lead parade (like the Shepherd's Lead at Black Sheep Gathering) and he won first place. I'm not sure how that works but I'm pretty happy anyway. I spun the yarn from Wayne's sheep and he told me today that he has ordered special bloodline ewes (the specifics are lost one me) for his nieces and nephews as presents so they can develop their own bloodlines. As for fleeces - he says he ships.
Posted by Sharon at 7:08 PM

Oh wow, I can smell that fleece and feel the grease from that picture! Will you process it yourself or send it off? I love processing wool from start to finish, but it sure takes a bundle of time and a LOT of water!

I'm tempted to process it myself, but I need a gun metal gray yarn so will probably ship it to Morro Bay and let Sherry do justice to it. It smells great - I stuck my nose in the bag before I even bought the 2 1/2 pounds of hoggit heavenliness.