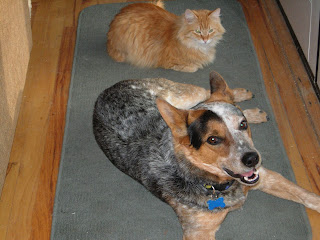 This is Buster. This is Buster's cat Charlie. Buster did not chose to be adopted by Charlie - he was chosen. Charlie loves his dog. I'm not so sure the feeling is mutual, although Buster gives his cat a lick (pretaste?) every now and then. 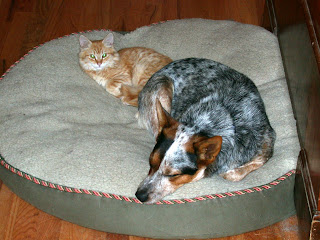 Charlie has also decided to be Buster's bunkmate, a begrudging arrangement - Buster does his best to ignore the intrusion. For a dog whose instincts are to eat rabbits, birds and small cats, I find his tolerance remarkable. Maybe Charlie knows more about Buster than I do. 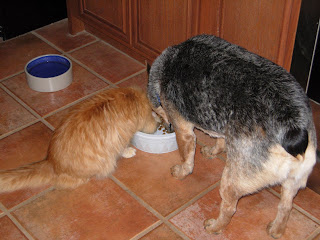 I know that cats aren't supposed to eat dog food, though the cat and the dogs all get Iams dry food. Perhaps Charlie can't tell the difference. Since we got Charlie as a small kitten, I wonder if he has bonded with Buster to the point he thinks he's a dog. Is that possible? I'll never let Charlie outside because I'm quite sure Eddie would eat him given the opportunity and no question the coyotes would love to meet Charlie. It's hard work to keep a cat indoors who doesn't want to be a cat who lives indoors. 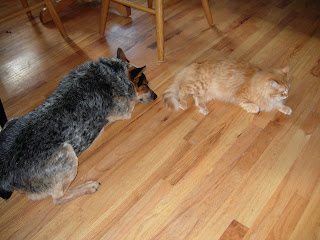 I had a gazillion things to do in town today and when I got home, I plunked my junk on the counter, while chatting with Ian. I walked back around the counter and almost tripped over these guys. They had greeted me, and happy that their owners were home and soothed by our voices, they were over and out. My camera was a plunked-on-the-counter article so I couldn't resist another picture of Buster being tortured by his cat.
Posted by Sharon at 6:05 PM

What a wonderful relationship between stereotypical rivals!! Your Charlie resembles my cat Bennie!!

And of course we love birds!!

There is no doubt that Charlie thinks he's a dog. Poor Buster! LOL

I love the relationships that dogs and cats can have with one another. We tend to think of them as natural enemies, but within a family they can become very good friends. I find that the cat whittles away at the dog until the dog just gives in and lets him sleep in his bed and eat out of his dish. Probably a lesson here -- just not sure what it is:-)

So, there is hope for you!

Love your dogs. The grandchildren aren't bad either.

What a fun, delightful post! Buster can come and visit anytime.