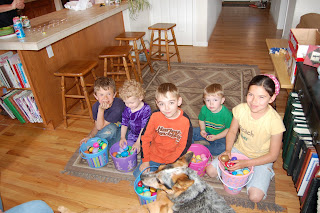 We had soaking rain on Friday and Saturday so our grandkids had to hunt for their Easter eggs indoors. Six of our seven grandkids were here for Easter, though only five are of the egg hunt age. In addition to our adolescent grandson, we have two adolescent step-kids, so the house was full, as it should be at Easter. I think I took a dozen shots and still wasn't able to get a good picture of them all. Who got the golden egg? 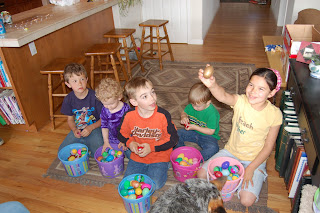 It was Elise! And was there much rejoicing? Apparently not so much. Before the rain they were able to run around outside and get really really really dirty and do a lot of hiding in the bushes, and did I mention get dirty? I think they liked that just as much as anything - maybe more than hiding eggs. 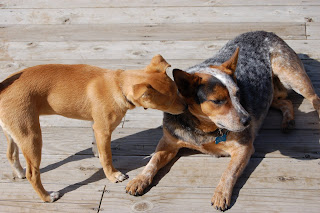 My huge worry was when Ian told me that our kids from Redding would be bringing their new puppy. I lost sleep. The puppy would eat our kitty Charlie, and worse, our Queensland Blue Heeler would eat their puppy. I didn't realize that they were bringing the Dog Whisperer.
Posted by Sharon at 10:31 PM

Looks like a great Easter! I love the Dog Whisperer photo.

Looks like a great Easter! I love the Dog Whisperer photo.

What wonderful pictures; kids and dogs!

That is some fine looking kids there! Especially the two on the left.

You have a scrumptious bunch of grandkids. You are lucky, indeed.