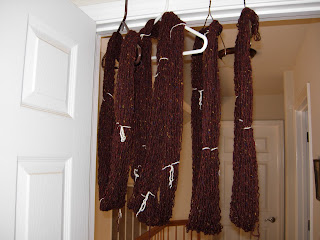 I have embarked on the defragmentation and liberation of yarn imprisoned in the form of shapeless, oversized sweaters knitted years ago when that was the style. It seemed so simple when I thought of it, but I can tell you now, it's a chore to frog a sweater. This is my first one I tackled, a sweater I knitted for Ian from commercial yarn before I was a spinner. Buster chewed holes in the sweater when he was a puppy so it seemed a likely candidate. 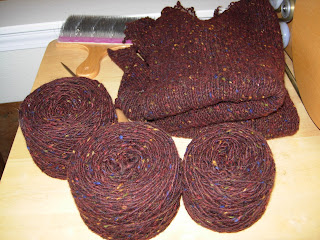 I sit on the deck while unraveling so the bits that would be a mess in the house can be recovered by birds for their nests. I have the back and one sleeve left to deconstruct but since we're going on a trip next week, I think I'll start a project with what I already have recovered. I'm thinking cardigan, with shaping. 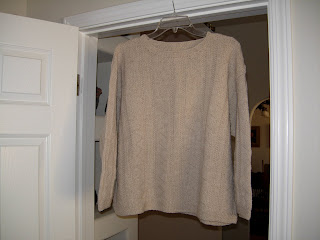 I decided this morning that this sweater will be my next victim. It has all the shaping of a table cloth. It's been years since I've worn it, but it won me a blue ribbon from Judith MacKenzie at the Black Sheep Gathering. My friend Jen and had split a Merino fleece from Terry Mendenhall and sent it off for processing. It came back as very kneppy roving, and Jen ended up giving me her half in frustration. It was a struggle to spin, but I am proud of the three-ply yarn that I was able to produce. 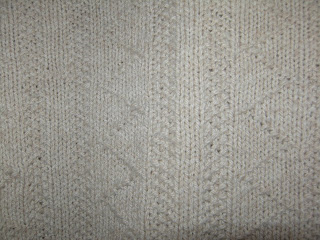 It occurs to me that I could cut and sew a new sweater from this one. So many commercial sweaters are made that way, but I made this yarn, one bobbin at a time. There will be no cutting and sewing here.
Posted by Sharon at 7:44 PM

You ARE the brave and patient soul... I did this once to reclaim some lovely yarn from a disastrous project and it wasn't easy. I have a mohair piece that I KNOW wouldn't come apart easily, and an almost-completed mohair cardigan from that same late 80s era, that I never finished because it is way too big for me now that styles aren't so blocky... I don't know what to do with it, except maybe find a much bigger person, LOL.

Wow! That is a major job and a smart one, too. The 80s were such a yarn eater...maybe you can get a couple of sweaters out of the yarn now.

Seems to me this is your style of spring cleaning - could it be triggered by the warm weather? Hate to see that second sweater frogged, since I have so admired it. If it is taking up too much closet space, I would be happy to give it a home....