And Yet More Retreat 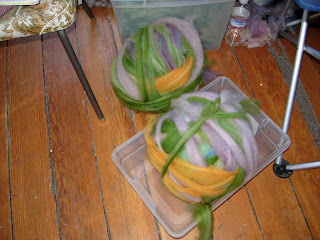 Lindsey brought a huge pile of locks that she had dyed about a year ago, separated them into individual colors and then carded them into batts on her Deb Deluxe Green's drum carder. She then pulled each batt into roving and wound into these balls, Kaffe Fassett style, so she could spin them to replicate a designer yarn she had found in a magazine. 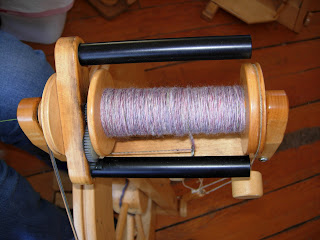 She wanted green to be the predominate color so wound it on most often. The colors are producing a nice heathery effect. 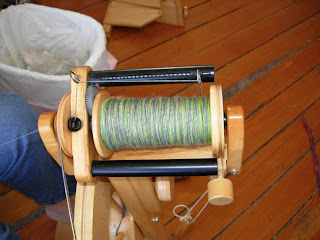 My first reaction was one of skepticism but as the green is added, you can see that she is producing the yarn that she had in mind. 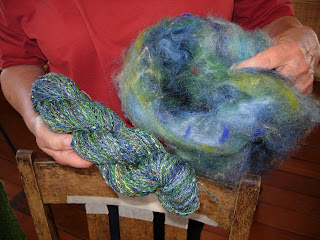 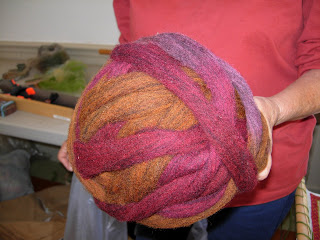 Sue was a busy girl. She dyed several bumps of roving from a sheep of undermined breed. She volunteers for the Humane Society and the sheep was one confiscated from a woman who had neglected her animals. The horses hooves were completely curled and the sheep was found, stuck in the mud on this back with his feet pointing skyward. He hadn't been sheared in years and his fleece was a mess. He's a lucky boy to have found Sue. Those colors are some of the ones that Sara uses in her basic color palette. 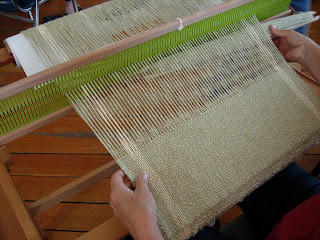 Having finished dyeing and spinning, Sue broke out the rigid heddle loom that she had just purchased. A committee helped her get it warped and she was making great progress on place mats as I was packing up to leave. 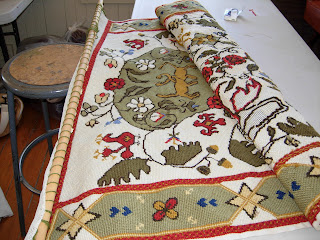 Nancy didn't want to pack a lot of equipment so brought this stitched rug that she has been working on for years. She decided a retreat is the perfect environment to stitch in the ground - busy fingers among friends. There was a lot of laughter at this retreat.
Posted by Sharon at 7:57 AM

Sounds like you all had a marvelous time. Crosspatch batts are oodles of fun and each one is different. I've a had a blast spinning them!

I can almost not stand seeing the pictures: I wanna go back! Waaaaaa!

It looks very inviting and inspirational to see all the people and so many various activities on the same place. Wish I was there. Enjoy!

Lots of wonderful things going on here. I absolutely love the roving and yarn colors, and am happy about that poor sheep. Nancy's rug is amazing! It would take me decades to finish such a thing.