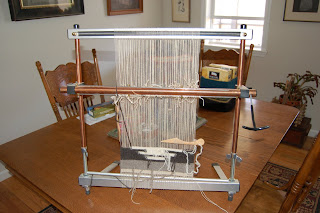 This is my Mirrix tapestry loom that I bought from Allison about seven years ago when she was a dealer for them. I bought a Navajo weaving book by Noel Bennett and tried to teach myself how to weave That was my first project and that's as far as I got. I'm going on retreat this week to the St. Mary's Art Center in Virginia City, *the* Virginia City of Hoss and Little Joe Cartwright. There are many groups who offer classes on a variety of arts and crafts, and the Reno Fiber Guild hosts this session each year. I have been fortunate to attend two sessions in the past, one taught by Sharon Alderman and the other by Judith MacKenzie. The facility doesn't have an elevator so we had to carry my 24" non-folding, heavy oak Gilmore loom up the stairs to the old surgery which serves as the studio. Ian had to go with me in order to help carry it. There were many husbands doing just that, and mine asked me to think twice before taking that loom again.

This year's class was supposed to be taught by Daryl Lancaster of Handwoven, but it didn't fill and instead became a self-study retreat. Four members of the Foothill Fiber Guild in Grass Valley, California, registered and Sara emailed Allison and me to see if we were going. We weren't when we got the email, but we are now! I know that Allison and Sara both are tapestry weavers, so even though I'm taking two books, I'll have the real deal when it comes to resources. 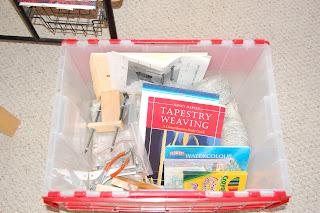 I have spent the entire morning, apart from working in the yard, trying to get my materials assembled. I am proud to say that I even found the instructions that came with the loom. I am also taking graph paper and colored pencils, just in case, and butcher paper to use for my cartoon. 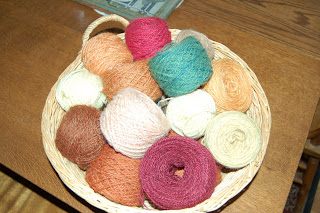 These are the yarns I'm taking. They all natural colored dyes on luster longwool, either Border Leicester or Romney. There's too much flash to slow the real shades, but what appears to be white is actually cottonwood, the darker brownish ball on left is madder on gray that was in dye bath as the ball next to it. Also, the red on top and the red on the bottom were in the same cochineal dyebath, but the bottom is gray overdyed. We're headed off to watch one of our grandsons play Little League baseball, then it's to a birthday party after that. I need a clone!
Posted by Sharon at 11:26 AM

Have a great time!

Oh, I hope you have been having a blast! I didn't think it would be possible to get away but am a bit envious right now. I am still looking for a July or August weekend to host spinning in the high country, so let me know.

I'm looking forward to see what you'll do with the loom. Have a great time with the Mirrex.