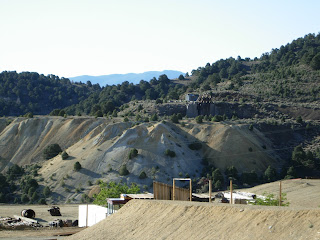 I took a long walk up to Virginia City from St. Mary's Arts Center. I have always been interested in this area, the foundation of our Battle Born state. Mine tailings are part of the landscape. With modern technology, the ability to strip minerals from the ground isn't nearly as quaint as here, if this is quaint. 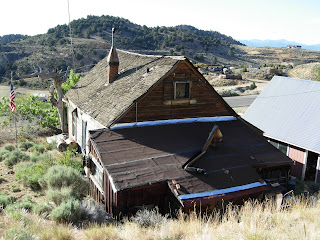 The evidence of fire is clear from the flaccid chimney in the foreground. Notice the sheet metal roof on the right. Mark Twain coined the term "Washoe Zephyr" when the harsh winds would rip through the area and tear off the roofs of the miners' homes. He loved a spoof. We still call those winds a Washoe Zephyr and there is nothing gentle or wafting about them. 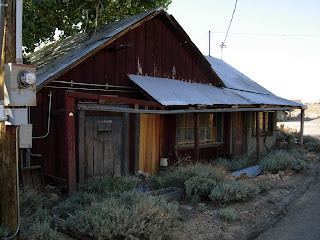 I thought this was funny - an obviously period structure and a power pole. Huh??? It's not been occupied in quite some time. 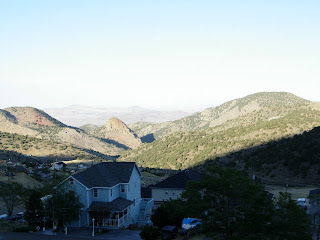 This is a view east and it includes the funny little cone that has alway caught my eye. The cone appears in so many of my pictures that I decided to drive home down the Six Mile Canyon Road to see it for myself. I've wanted to make this drive ever since I moved here, and after I said my farewells, I pointed my car east, and away from home to finally see it. This is the route that more-or-less Adolph Sutro's tunnel took. What an interesting man. As an engineer he proposed the humanitarian drainage - many men died of scalding water - by an engineered tunnel to save the lives of miners, but as an abrasive foreigner who alienated nearly everyone he spoke to, he struggled for support. He finally managed to get his project financed and built, but the hurdles took so much time that when he was finally able to accomplish his visionary tunnel, the mines had started to fail.

He was paid for his endeavor and took this payment to San Francisco where he became mayor and his name appears in many places. He doesn't appear to have been a lovable character, but he did purchase books on a huge scale. His legacy lives on in the Sutro Library, a subsidiary of the California State Library. His massive book collection was diminished by the 1904 earthquake and subsequent fire, but the surviving books were substantive enough to base an entire library on. 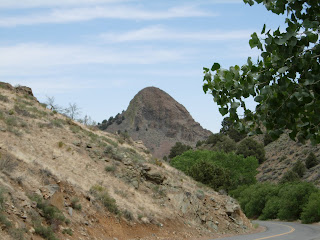 And here is the cone I was chased with my camera. There wasn't a lot of traffic on the road so I stopped for pictures when I felt the demand or need. 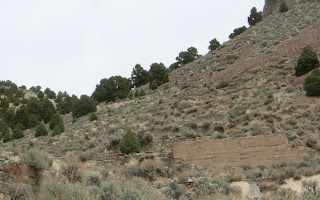 On the face of my funny cone is evidence of some kind of entire mill racings, bracings for an extraction process. I saw banks and banks of these supports. I can't guess what the in-business mill looked like. I'm feeling a bit of disconnect.
Posted by Sharon at 5:57 PM

Very interesting post, Sharon. What fun to be able to pursue something out there on the horizon.

Great pictures. I haven't been up to VC in years and you give me a yearn to see it again.
Barbara C.
Reno