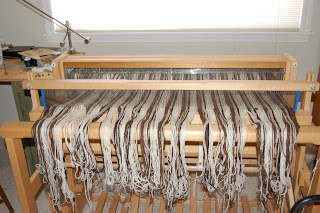 This is where I am in the project. I should have been tied on by now, but- there always seems to be a but. This is a four-harness twill - I have no idea why I didn't use all eight harnesses - and because I'm weaving the full width, ran into the problem of what to do with the heddles on the last four sheds. There are enough that they pinched the weaving area. I had to decide if I was going to re-thread the warp onto all eight harnesses or remove those heddles, which is what I chose for the sake of time. Remember that I'm trying to get this done for the fair in August. However, and there's also always an however, it cost me every fingernail I have now and any that will try to grow for weeks to come. I had hoped to have the satisfaction of seeing the warp tied on, but since I have so much weft to spin yet, it's not so terrible that I can't do it until next weekend, just disappointing..
Posted by Sharon at 5:38 PM

Oh the nightmare of removing or adding heddles with a warp half on. Been there, it's not pretty. Lookin' good so far though :).

I think it's looking exciting! Having never woven with my handspun (well, except once as a singles weft) I am very impressed. Can't wait to see how it weaves up.

From my perspective, it is exciting to see your spinning getting into project form. I had no idea you were trying to get done in time for the fair - I will keep my fingers crossed for you.