I finished this last night though I hadn't intended to. About 9:00 I decided to read a couple of chapters before going to bed. The story takes place over a thirty-year period in volatile, turbulent Afghanistan, beginning with the Soviet invasion and ending with the downfall of the Taliban. It's told through the lives of two women who become unlikely allies and friends. Where I picked up last night, they had just gotten into a terrible pickle and I found myself reading the kind of frantic intensity I experience when I read something like John Grisham's The Firm. I realized I would have to finish it.

I had read both The Bookseller of Kabul and Reading Lolita in Tehran, but being drawn into an empathetic connection with these characters made me feel how harsh the struggle to survive had been under the punishing regime of the Taliban, most especially for women.

Khaled Hosseini's first book was The Kite Runner. I've read some reviewers who thought this might be an even better book. I wouldn't say that, as I liked them both. I identified with this one more because it's a story of women. I will say that this had a happier ending than Kite Runner, to my relief

This morning I started on Harry Potter VII and was immediately struck by how similar the stories felt. Lord Voldemort and the Taliban are selfish and tyrannical forces that know no reason, seemingly cannot be stopped, are cruel, without any compassion, and have no loyalties. I wonder if Afghanis would find Harry Potter's battle to survive against Lord Voldemort all that much of a fantasy. At least he has his friends in the Order of the Phoenix whereas the women had no support group at all. 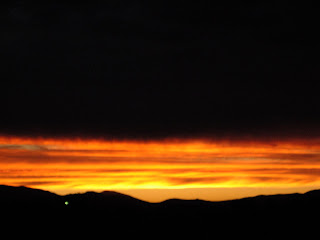 I pulled off the road on my drive home tonight to catch this unusual sunset.
Posted by Sharon at 9:29 PM

Thanks for the review...I wondered if the author might be a "one hit wonder" after Kite Runner. Sounds like that's not so.

I just finished reading Scott Simon's Pretty Birds....I highly recommend it. Now I've started Marianne Wiggins new book The Shadow Catcher....because I desperately need to read a book that is not about war.

What a gorgeuos sunset! Thank you for the review and recommendation. I am in need of something to read right now and one of these sounds like just the ticket.