A Good Day to Dye 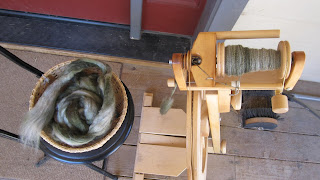 I'm spinning the fiber I won at Spindle Camp in May, Blue-faced Leicester and silk. I haven't been spinning lately but need yarn for hats as the season is approaching. That's just an excuse. I love to knit hats! I've not been excited about this but it's taking on a the appearance of washed denim and I find I really do like it now. 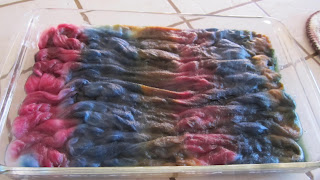 I decided yesterday was the perfect day to dye some wool. These are pretty much the same colors I used to dye my skeins the other day, but the blue took over that dye bath. I'm using Gaywool Dyes and mixing the colors together I have. For instance, the gold is pumpkin and olive green. I poured on the color in stripes, covered with water and baked in the oven at 300 degrees for an hour. I'm sure a half hour would have been adequate but I got sidetracked. 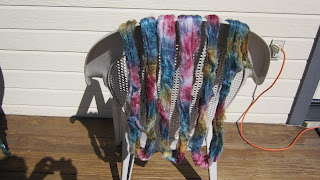 I like white in the roving and think of it as a color. The roving is Panda and I'm thrilled with my colors - good guessing on my part. All three colors are mixes that I couldn't possibly repeat. 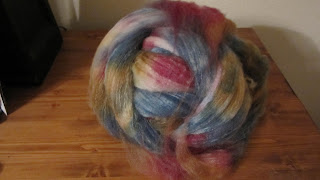 There's no guarantee that these colors will blend into a pretty yarn, but I'm chomping at the bit to get started. I love spinning Panda - it just throws itself on the bobbin. 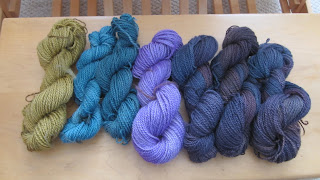 While the roving was in the oven, I was kettle dyeing yarns that I'd like to use for color splashes in the hats. The three skeins on the right are the ones from last week. The four on the left were from yesterday. These are all from our Shetland wethers. 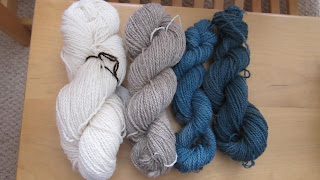 I'm really pleased with this experi-
ment. I put two skeins that were originally the same as those on the left into the same dyepot and got two different shades of blue. I'll be doing more of that again. 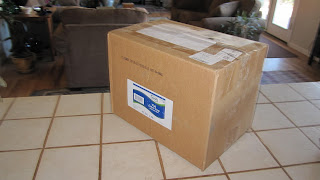 Ian brought this box in just as I was filling my water bottle to head into town this morning. He said it came yesterday but he didn't pick it up until just now. I know what's in the box but I'm saving the exploration of the contents until the morning. I didn't get home until 6:00 and I want to savor the contents when I'm fresh and not exhausted like I am now.

It was yet another full day in town. I got to the farmers market at 10:00 and spent the last of our CSA bucks on beefsteak tomatoes and pickling cukes, then picked up the loom that Jeannie is loaning me for the Robin Spady weaving workshop in two weeks. It was at the new Jimmy Beans location so I also got a facility tour. Then I was just in time for my eye appointment where I got fabulous contact lenses that let me see both near and far, had lunch with Melissa, we shopped and bought more used clothes - got a brand new pair of Sofft shoes for $18 that retail for $100 and even though they were new, they were in a used store allowing me to keep our "no new clothes in 2011" vow - had a great workout and swim and came home with more fresh produce in our CSA basket. I'm reminded once again that life is good, in spite of the shadows.
Posted by Sharon at 8:26 PM

Love the dyed panda colors!
What workshop with Robyn? She's a great teacher, probably the most prepared I've ever taken a workshop with.

The panda colours are wonderful! Looking forward to seeing the yarn you spin from it and the hats.

Oh, pretty pretty Panda! Those are going to be some wonderful hats.
No new clothes in 2011...I hope that doesn't mean sewn at home new ones? Even though I haven't tried not to buy new clothes I haven't. I think a sweater in MA when I was there and a shirt on sale here locally is my count for the year. Oh and some new underwear. That doesn't count.
Sounds like a perfect day!

I love the colors of the dyed rovings! Great combination.

I love your kettle dyed yarns!! I'm glad dye day is coming up in a couple of weeks, because I'm itching to play with color.

You have more patience when it comes to boxes in the mail than I am. Heck, I've been known to stand over Sandy or Scott and make them hurry when they get boxes. I'm such a kid at times.

Oh.. those colours are divine. Your dyeing makes me so want to dig out some colours and play. Those new hats are going to be utterly awesome.
I can't wait to see what's in the box!

I love the newly dyed roving. It looks great. I can't wait to see what it looks like when it's spun up.

Ilove the color of your roving!!!!! I like the idea of not buying new clothing, except for under clothing, for a whole year. I must admite I did buy some. Reason. I've gained more weight then I care to tell anyone.

Your panda looks like the "fugly" roving I dyed. The yarn, spun by Becky, is very, very nice. Yours should do the same.

Nice shoe score! You know me and shoes - I found a pair of Born mules at Goodwill for $3.00. I was thrilled!

Your panda looks like the "fugly" roving I dyed. The yarn, spun by Becky, is very, very nice. Yours should do the same.

Nice shoe score! You know me and shoes - I found a pair of Born mules at Goodwill for $3.00. I was thrilled!

I love your kettle-dyed yarns! So pretty. I love knitting hats in the fall -- I like going into winter with a good stock to give as gifts and to replace the ones that invariably manage to get lost.