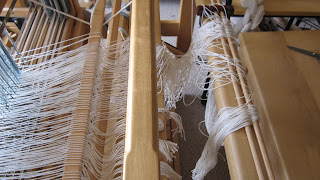 I was tired from last weekend and wanted to get a warp on so I could have some weaving therapy. I'm doing yet another set of four placemats, tied onto the same dummy warp. After watching the Madeline Van der Hoogt video, I put a cross in the dummy warp as well as the new one. There's a cross on both sides of the reed. Zounds Batgirl! That's the ticket. I had it tied on in about an hour and a half. 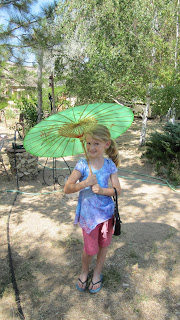 DD Chris called this morning to say that Alexia had decided she didn't want to go to gymnastics. She wanted to help Grandma with her farmers market craft fair. Oh, and she'd like to spend the night. Okay on both counts. This is my craft fair helper. 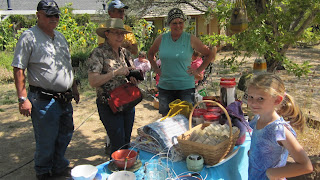 She was terrific. She put one of my felted bags on her shoulder and went over to the farmers market area and said, you should see the things my grandma makes - she made this and she makes really stinky soap. It helps that she's adorable and voluble. 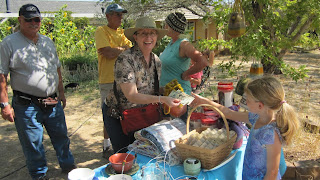 The lady who bought the bag is visiting from Tuscon and her host in the turquoise top, trying on one my hats, bought placemats from me at the Hunter Pace event two weeks ago. Word of mouth is good. I didn't sell any soap at the Hunter Pace, and that's what I sold today. 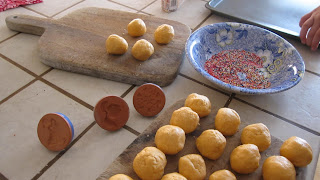 We made cookies this afternoon. They're orange because the only Jello I had left was orange. The cookie stamp on the right is hearts, a gift from Amy last weekend, and it quickly became her favorite - it doesn't stick. 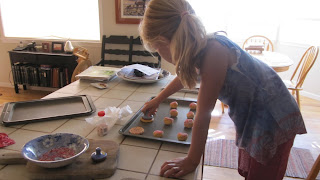 I talked her into only putting sprinkles on the top of the balls and then stamping them. It's self preservation. Sprinkles are like edible glitter. I cannot believe I have so much patience with her when I had none with own three children. 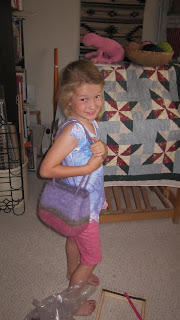 After cookies, we decided we'd weave for a little bit. I asked her to model the bag she had shown around the farmers market this morning. What amazed me is that she did it completely on her own. I'm sure it looked like I was hustling my granddaughter. She came with money and wanted to spend it. She kept telling me what was for sale and for how much. I finally let her buy a jar of homemade apple butter for $3.50. She came with $18.00 - Kerry helped her count it out. Yikes! 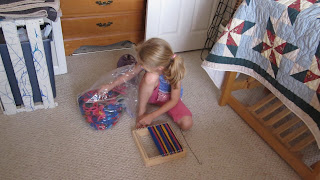 We decided that we grrls should spend some time weaving. The knitting has fallen out of favor for the moment. I'm looking for a rigid heddle loom for her. I think she's ready. 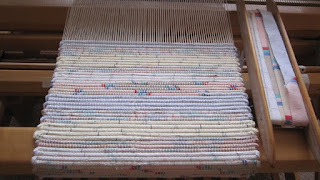 This is the set I'm working on right now. It's very pastel. I think the fabrics are shirting materials - they all have stripes. It occurred to me today that I should try Marshalls or Ross and see if I can find a single flat sheet that's an orphan for cheap. I can keep my price low if I can keep my costs low. I hope this is the brilliant idea of the year.
Posted by Sharon at 9:26 PM

How cute your model is! The bag is pretty nice too.
Schacht makes a sweet little knitters rigid heddle loom I think, you might find one used in good shape. Try an ISO ad on Ravelry or keep an eye on Craigslist.
What a wonderful weekend you two girls had!

Don't forget to stop by Good Will to look for sheets...you can usually pick up some for very little $$. You had a great helper for your booth!

In the bag photo, Alexia looks like a mini-Martha Stewart!

Congratulations on the sales!

I like the idea of thrift shops - around here the idea would be garage sales, freecycle, or craigs list.

I was going to suggest Goodwill for sheets, someone beat me to it - also Salvation Army, thrift stores and garage sales.

Ok, what are cookies that have orange jello in them??? So you could make them any flavor & color?

Cutest pictures EVER!! I saved each one but the picture with the umbrella is my favorite.

She would make a good model for a Hip to Be Square Looper Loom promotion!!!!!!
You're hooked on placemats, aren't you???? :)

She's an adorable model and kids do sell things very well. Hard to tell a kid "no." :)

You're lucky to have a cute little granddaughter who wants to spend time with you. They grow up so fast and would rather be with their friends.