All in a Days Play 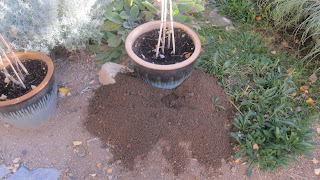 One morning several weeks ago we came out the front door to discover that rabbits had climbed up into these pots and completely chew off the vines - they're nothing but stalks at this point. This morning I came out to discover that a ground squirrel had left his calling card. 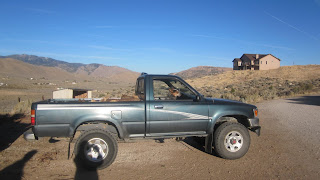 I was looking for Ian but ran back in for my camera. I had packed my car last night for a craft fair today and wanted to let him know I was leaving. He was unloading firewood and I thought Buster in the front seat was just too funny. He stays there until Ian is done and then rides with him into the garage.

We had a little trauma with Buster and Charlie a couple nights ago. Buster acted like he was attacking the cat. When we unraveled the sequence, here's how we think it went: Ian cleaned Charlie's litter box and poured in fresh litter stored in the garage. We use wheat litter and there was a mouse in it, which Ian then delivered to the cat's box. Charlie's eyes must have bugged out when that mouse appeared. When I flipped on the lights, he was crouched with the mouse in his mouth and Buster challenging him for possession. All was well after Ian disposed of the unfortunate mouse. Now every night Charlie lays in front of his litter box, watching the opening, willing another mouse to appear. 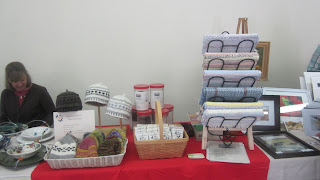 The craft fair was at our local POA Ranch House and it was entirely valley folk. This is my space - pretty tight. I think the display rack Josh make for my placemats is genius. I wasn't sure how profitable this would be but there was no booth fee so I looked at is as opportunities to meet my neighbors and visit with the ones I know.

We talked a lot about the house that burned. The folks were moving out and so little was lost in personal effects, but the house was totaled and is being dismantled. So now we know. We talked about community involvement and support - it makes me glad that I'm signed up for the county's Community Emergency Response Team training in December. 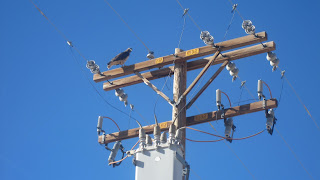 This is not a pigeon! A half mile from the house, a red tailed hawk drifted over my car and swooped up to this post. His wing span was easily three feet, so I waited, thinking I'd be ready when he flew off. 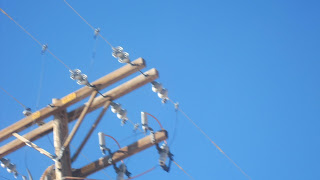 This what I got. My camera is only two years old and when I got it, I thought it was magic. My old one was so slow that when I'd hit the shutter to take a picture in New York, someone would have walked right into the picture, even though they were yards away when I depressed the shutter. I was in love with this camera - two years ago. Now I'm totally frustrated. I want something small and fast - I need to talk to Amy. I think she likes her new Nikon Coolpix. Technology is so frustrating. 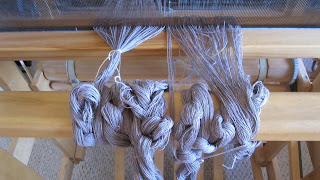 Here's a technology that's been around for a while - weaving. I watched Madeline's DVD on warping, so I cinched the death grip tie on the other side of the cross. It wasn't my DVD so I couldn't go back to get the explanation so I just did it. This is warp for my second sampler. I've threaded the left side and look at what a tidy housekeeper that knot it. I'm sold, even if I still don't actually understand why it works.

Oh, and I did well at the craft fair - thanks and howdy to my neighbors.
Posted by Sharon at 8:52 PM

I get frustrated with my camera too, an older Nikon Coolpix. Maybe the new ones are faster....
Congrats on the good sales at the craft fair!

What a great way to meet your neighbors PLUS make a little fiber cash! I know what you mean about your camera..I'm feeling some frustration with mine!!!

I can't say I'm frustrated with my camera at all; I don't think it's a speed demon, but it does so many things SO well that I mostly adapt to the shutter speed. Panasonic Lumix ROCKS!

Glad you did good at the craft fair! I think I'm going to start hitting things like that, even though I don't really make much in the way of crafts, just my few knitted scarves. My camera does that too, but its my phone so I can't complain too loud ;-)