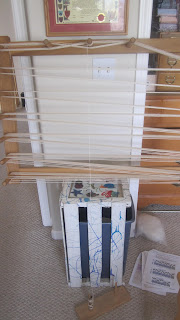 I ordered rug warp from Leesburg Looms a number of weeks ago. She told me they were out of the stock, but we were just leaving for Oregon and I knew it would be weeks before I would have time to use it. Plus I had Robin Spady's workshop in there too, but I now really need to weave more placemats for the next crafts fair. I decided to wind what I had and hope it would be enough - it wasn't. I called Leesburg Looms and she said it had shipped last week. 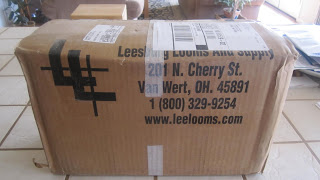 I heard Ian come home, so I went down-
stairs. He brought me a package from the gate. It was already there when I made my panicked phone call. Just in time, saved by the bell, a stitch in time, yada, yada, yada. I'm back in business! 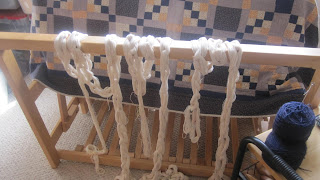 I wound the warp in three bouts this time. I just think it's easier to work with that way. I'll make a cross from the existing warp I'm tying onto and I think I'll probably just hold the new warp cross in my hand to knot. I know - it's Greek. It used to be Greek to me too! 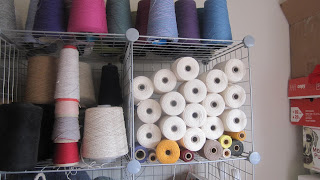 The shipping is so expensive, so I ordered enough to last for a while. The cones were $3.55, which is about a dollar cheaper than I've paid anywhere else. I ordered from them on Hilary's recommendation. I envy anyone who lives close enough to a supplier to just walk in and shop. 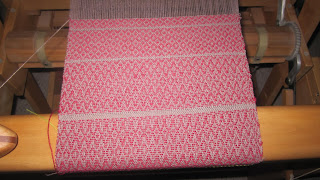 I warped Maudie Mae for the second sampler from Robyn's class, this time in twill tie-up. I was able to squeeze in an hour of weaving this morning before leaving for town. The first two samples look like nothing because that's exactly what they are. I was following the wrong instructions. The next one and the one I've started look like something because I followed the right instructions. I'm working on the overshot pattern right now and can see how that would make a nice border on a hand towel.

I was trying to get ready for the next two craft fairs and have decided that I'm not going to get my panties in a twist over what I don't have made yet. I'm only going to do holiday craft fairs next year and when they roll around, I'll be ready to roll with them.

As always, I had a day full of errands in town, but the best news was my bone density test. Normal! Totally normal with me from a high risk history. I rewarded myself with the gym - 25 minutes on the eliptical trainer and 35 minutes in the pool, which is how long it takes me to swim a half mile. I crawled to my car and to think I used to swim a mile before work, work all day, and then cook dinner.

Wait. I did cook dinner. We're getting a stash of CSA veggies and I'm struggling to find creative ways to use them. Tonight I boiled a large turnip with two large potatoes and then mashed them up with some roasted garlic I had roasted this morning. Then I made a mushroom gravy. We had shallots in our basket today, so it was just them, the mushrooms, and then a rue with chicken broth. Oh my gosh, was it fabulous. I had picked up a rotisserie chicken. Next I tackle the butternut squash - hmmmmm.
Posted by Sharon at 9:01 PM

the squash: have you tried squash soup? The recipe I use is here but there are a ton of them online. Some are more sweet, some are more savory...we prefer savory.

Lots of warp for lots of projects. I think that is a smart idea to order lots of it at once. Shipping is expensive, so it only makes sense.

I love Leesburg Looms, and Pat is always very accomodating. We're fortunate enough to only live about an hour or so away, so can make a morning roadtrip if needed. Cant' wait to see more of your placemats!!!!

Butternut Squash: 1 lg squash, couple of carrots & potatoes, an onion, stock & water (not too much), cook, mush, thin with milk or cream, season with S&P and . . . a glug of real maple syrup. (Freezes well too!)

I'll email you the pumpkin soup (actually sopa de calabacitas, which is any squash). I've made it with butternut and it's really good!

Love the weaving! Butternut squash -- I'm going to try a new recipe that they were cooking and giving samples of last Saturday at the market where we knit. Butternut squash, pecans, onions. I'll email it to you.

I love butternut squash! Although, I doubt if how I make it is all that healthy - it includes lots of butter and brown sugar - more like a dessert than a vegetable when I get done with it.