In the Washington Moment 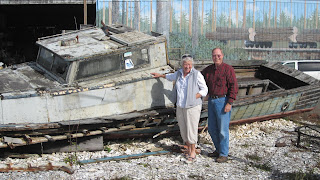 Ian suggested we take a drive north since it would be new for us, and Georg was all over that. She was a fantastic navigator and tour guide. Retired librarians still like information. I took this of Georg and Ian in Raymond, Washington by the marine museum. Georg was looking for information on what happened to the Krestine, a 100' foot Baltic trader that she and Bob had owned some years ago, and then sold to the curator of this museum.

If you click on my link and scroll through the pictures, you will see what happened. We got a mocha at a local coffee shop and it was the owner was who told Georg about it. Pete, the man who bought it, had just left it moored, until one day it sank. The Coast Guard had them remove the masts and cut off the upper deck, leaving the remainder of that glorious ship underwater. Bob and Georg had a B and B on Bainbridge Island in a Frank Lloyd Wright house called the Bombay House. They bought the Krestine and moored her below for overflow, but found she was popular on her own. Georg has a photo album just of them sailing on the Krestine. They loved her, and when she learned of it's death, her eyes filled with tears. That was the hardest moment of the trip. 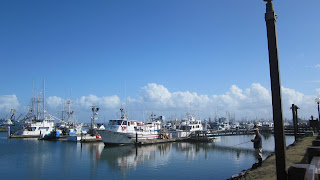 We drove up to Westport for lunch. The Pacific Northwest is a marine environ-
ment and the coast is about boats and fishing. Georg told us about an area called Washaway Beach and so she had us pull into it. There was no it. The road ends on the other side of a bridge. I didn't take pictures but the above link is pretty dramatic at a time when we're talking about rising seas. 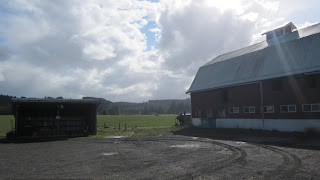 We turned inland and started a hunt for three dairies that she and Bob had visited for cheese. It was yet another great adventure, and the cheese was worth it. Willapa Hills Cheese was our favorite and I should be able to get it from Wholefoods. The young wife grew up on Bainbridge Island and instantly knew the Bombay House when that came up in conversation. Insert Rod Sterling music here....

Robert Pyle, a noted biologist wrote a book about Georg's place and surrounds called Sky Time in Gray's River. It's a wonderfully lyrical look into that delightful little place and I re-read it every time we come home. 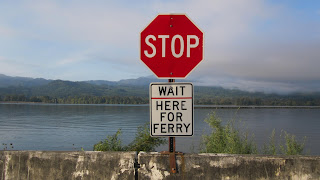 Ian and I decided to take the Cathlamet fairy across the Columbia. I'm not sure it saved us any driving time but it was fun. Georg told us it runs on the hour so we were the only vehicle for about ten minutes. 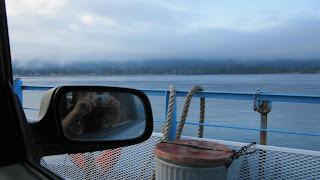 The fairy holds six vehicles and is slightly larger than a shoebox. I was expecting something slightly more noble. 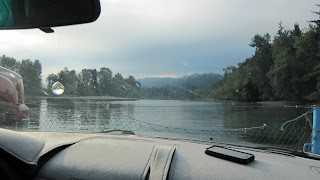 On the Oregon side, we entered into a slough, which got pretty narrow by the time we reached the docking point. It was low tide so we had a bit of a climb from ferry to dock, and then drove through more dairy ranching country. 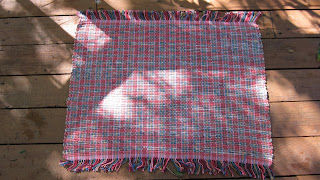 Afterthought. I almost forgot this! Georg got this fantastic little rag rug at a garage sale. The weaver sold it for $2 because she said it was imperfect. Georg called to see if I could pay her a visit, but she said all weaving is put aside right now. She's Finnish and part of a greater Finnish community. Baking for the holidays is now in high gear. Perhaps on my next visit?
Posted by Sharon at 10:03 PM

What a sad ending to such a great boat. It brought tears to my eyes just reading about it.

So, what is imperfect about the little rag rug? It looks awesome to me. Nice bright colors and lovely pattern.

Maritime history is terribly interesting and old boats like old houses convey such great stories of their times.
She had a useful long life and was well loved by those that owned and sailed her, tales are told of her. The end, doesn't matter so much when taken with the breadth of her travels.

Such a beautiful boat and such a waste.

Love the stories....that's such a beautiful part of the country!