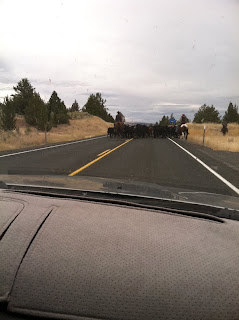 I'm going to try to catch up a little here since so much has happened in the last week. We left Reno for Oregon early last Sunday morning. Ian drove the first leg to Lakeview, where we ate breakfast again at the Dinner Bell. It's a seven-hour drive to Bend from our house with stops, and Lakeview is half way.

I was still in the first hour of my leg when we came upon this. A truck had parked in our lane with a sign on the back, saying "cattle ahead." We got caught in a full drive, moving from one range to another. We had to wait, that's all there was to it. 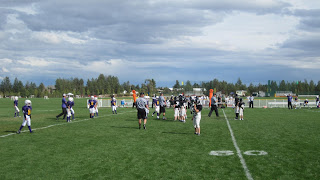 I don't have blue tooth so asked Ian to call when we turned onto Hwy 97 at LaPine. Grandson Logan's football was going to start at 1:00 and we were cutting it really close. He was already at the field so our kids waited until we got to the house, we hopped into their car, and because the game started a couple minutes late, we were there in time to catch it. We went from flying through the high desert to pee-wee football, just like that! 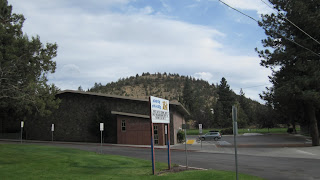 DIL Missy has volun-
teered in the boys' classrooms since they moved to Bend and last year volunteered in a reading readiness program. She just wanted to be in the classroom as teaching positions are tightly guarded secrets. At the last minute, this one opened up - a one-year contract, and she's back in the classroom with pay. We were going to spend Sunday night with them the following weekend on our way home, but they couldn't get UNR/Boise tickets so our plans changed. We'd spend four days in Wash-
ington, and then come back to celebrate with them. 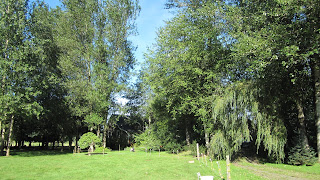 This is where we were head in Washington. My brother Bob planted all these trees and now they've nearly enveloped the place. 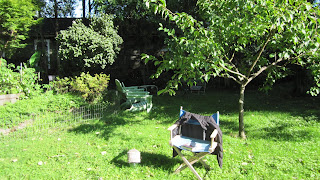 I wanted to read my book and ended up chasing the sun. My book was Tina Fey's Bossypants, which I absolutely loved and was sorry to finish. I had planned to knit hats on the trip so took my glass head. That's it in the grass, and I just kept rotating the hat toward the sun until it finally dried. Man, it's humid in Washington! 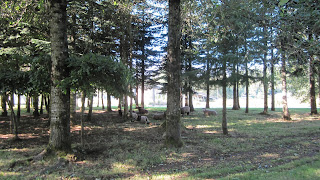 My brother Bob bought this flock a number of years before he died. I think it was mostly for esthetic at the B and B, and to help him keep the grass mowed. Georg has kept it going and the income from her locker lambs is something neither one of them might have anticipated. 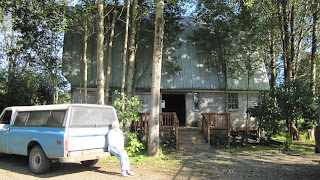 While we were there, a crew was replanking the end of the historic barn. Georg had applied for a grant but been turned down since it was no longer a barn with a business. However, they did give her the lumber. While Bob was alive she had a fantastic gift barn here, but the B and B and flock are all she can manage on her own now. She was catching some of the brief sunshine while waiting for the crew chief. 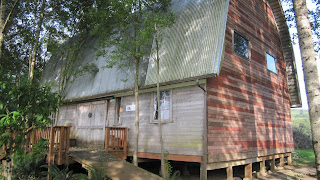 The end result is a work of art. They did this all with ladders. When they'd get to the middle, one would climb down and jounce the ladder while the guy at the top hopped it across. It was somewhere between scary and aerial circus act.


I did a walking tour since it was just impossible to show pictures of all the parts I love. I realized tonight that I didn't take a single interior picture, which reflects their love of Mexico and the 15 years they lived in San Miguel de Allende. 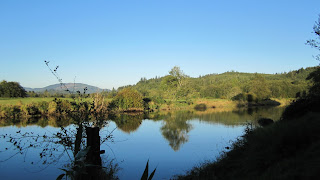 Quite a lovely place! And yeah for making it to the game. Boy, I think you'll find someone flipped the switch to rainy fall weather on your return home.

Beautiful place they have. I love all the trees. It looks very peaceful.

Thanks for the video. That was really a treat. It's a gorgeous place.

Wow what a lovely place!!!! Thanks for the video.

I really enjoyed the tour of the place....how lovely! I know you'll enjoy the visit.

Sharon I loved the tour! And I loved hearing your voice. Good job.