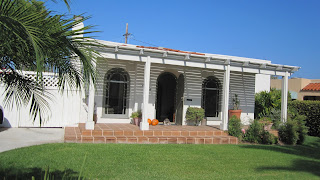 This is the house we flew to San Diego to "warm." I'm envious of their placid dog Walter, content to lay in the front entry and observe life. Their house is in Kensington, a really lovely little community of southwest style homes built in the 1920s and to which Pasadena planners looked for inspiration. It was nice to be back in San Diego - this is where I grew up. 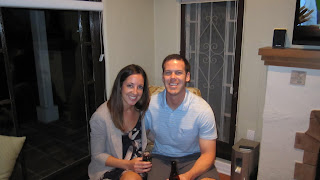 These are the happy owners. We are so proud of all our kids. These two both have large families, the housewarming was family only, and was full of happy well wishers who all live in SoCal, so we were the only "guests." It could not have been better - honestly. 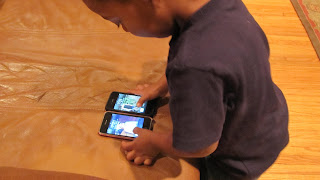 They lost control of their party in the late afternoon when the Oceanside Baezas arrived with Solomon, the iPhone king. My phone was the second to fall - that's Alexia on the right phone. 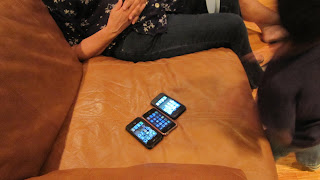 And then there were three. 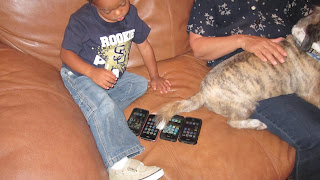 And lookie, now there are four. Two people who still had their iPhones made videos, which I wish I had access too, but now I'm working on a old point-and-shoot. 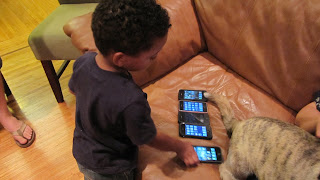 This does appear to be the sixth phone he's collected. 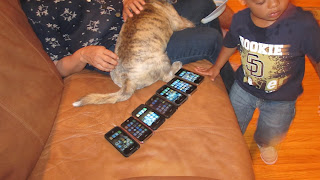 And now he's solicited another one, bringing the count up to seven. 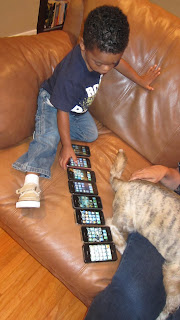 And his final collection totaled eight. If there were more, no one was letting on. 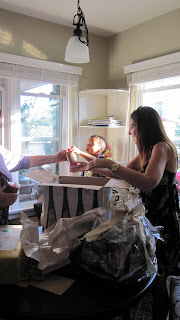 He was also an able assistant to his aunt-to-be, unwrapping the housewarming gifts. Actually, he got the action going. Too many presents and too little interest! I heard the paper rip and his little voice, "and I don't know what it is." We agree later that the star of the housewarming wasn't the house, it was Solly. Every family needs that cutest little kid and he's doing a great job of filling the slot!
Posted by Sharon at 3:53 PM

Wow! What a beautiful house! Cute kids, too!

I love that he collected the phones, and love that everyone let him.
He's a cutie.

What a cutie. Every party needs a bright spot like Solly. :)

How adorable! Obviously, he's all boy.

You're just a travelin fool lately! So glad you're able to do all the things you want to do, have time for them all. Beautiful home!

Can I hire him for my next party??? :)
Simply adorable.