Did Someone Say Towels? 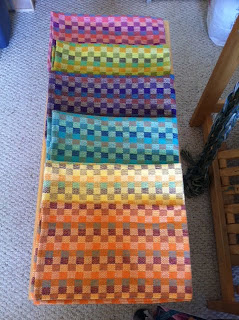 I finished the Fiesta ware towels yesterday. I posted them to Facebook this morning and could have sold two right then, but I had a preorder and shipped four towels in California this morning. I'm left with the purple and pink one. At least I have inventory for the craft fair next weekend! Facebook has been good for my sales. More than half have sold as a result of my photos. I'm going to repeat this color pathway next week, but will put on a eight yard warp, and skipping purple and pink, will do two of the other colors. I realize that my friends will eventually reach a point of saturation and I figure what they like will do well at a craft fair. 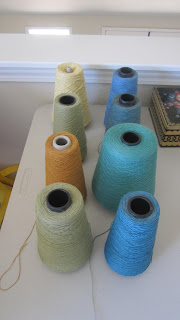 I've been thinking about doing a sea glass series, based on the colors of glass that I've collected on the beach at Oceanside. With the inventory I have, I think these colors will represent my collection nicely.

However, I got on Google images for sea glass and was taken by the blue and green that I don't have. I'm going to have to place an order with Halcyon soon for yarn color that Webs didn't have and I'll be ordering these two colors. I'd like to try another sea glass series incorporating them. 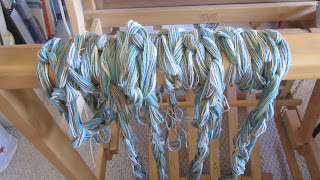 I got the warp ready and on the loom. It's pretty sedate, compared with the colors I've been using. This is my first eight yard warp. I was nervous about putting on six yards but after four of them, I'm a veteran and ready to advance - hah! The secret is winding on with the paper. Now if I can just locate a source of corrugated paper on a roll, I'll be in like Flynn - and no, I have no idea what that means.

No weaving for me tomorrow. I'm going to Yerington and you can see my journey here. Start me from Doyle, but then I have to cross over the Spanish Springs to Vickie's house - not on the map. She's driving so route us through Carson City where we will drop off her son at her mother's, then east on Hwy 50 (the loneliest highway) and to Hwy 95 and then south. It takes an hour to Spanish Springs, and then an hour to Carson and then an hour and a half to see Diane in Yerington. That's a heck of a trip to go to lunch!
Posted by Sharon at 6:34 PM

Beautiful towels!!! Congratulations on your long warp....you'll get used to it!

Those Fiesta ware towels are beautiful - I can't wait to see the beach glass ones. T.

.... how can I find you on facebook? I'm quite new to facebook so I'm not sure how to find you.

Ooo! I love the sea glass colors! That intense blue and green against the softer colors will make lovely towels. They cool you off just looking at them.

Great towels! And congrats on the sales. I don't do facebook but so glad it's working for you.

SUCH pretty towels -- I'd have a hard time using one!

It's inspiring to see the projects that you're doing. The colours and spectacular and the patterns work so well.

Your towels are inspiring---I am an extremely beginning weaver. The expression "in like Flynn" refers to Errol Flynn. Back in the day, he bought his way out of an scandalous situation with an underage girl, which caused quite an outrage at the time.