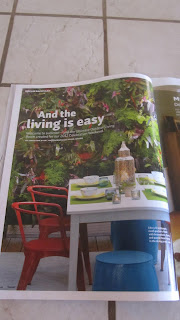 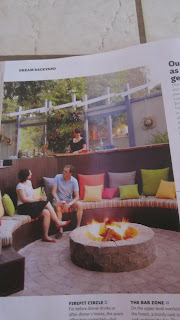 These photos from a recent Sunset magazine article were my inspiration for an Aloha colorway series for my towels. I discounted some of the brighter colors because they already appear in the Fiesta ware series. 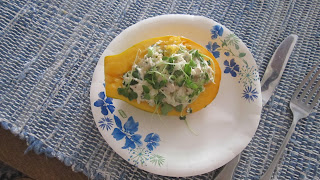 Then at our book club potluck luncheon Saturday, one of the ladies brought mango halves with chicken salad. That's exactly the color I was thinking of and the dish was delicious. 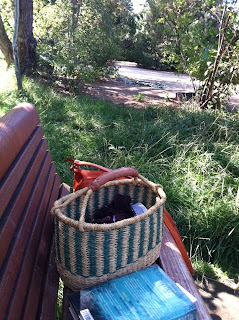 Tuesday I rode into town with Ian to pick up my car after it having been serviced. I had some errands to run including a dental appointment but on Tuesdays I often end up with time to kill before picking up our CSA box at 3:45. I know if I go to a store, I'll buy something and I really don't like to shop anyway. I have always loved the Wilbur May Arboretum so now I'm always careful to pack a book and knitting. It's not killing time at all. It's a walk in the park! This was our CSA box this week. The box was so heavy that the delivery driver wheeled it to my car on a dolly. I split it up between our household and Carol and Harry's, but it's still a lot of food to eat in a week. It's the deal of the century - $417 for fresh produce weekly, from April to October. 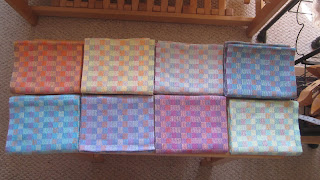 So these are the completed towels. There are ten but I wove two in the same warp colors. As much as I want to see mangoes, pineapples, hibiscus flowers and tropical lagoons, I think they're just too close to Fiesta ware colors to repeat in the future. I've started winding a warp for Sea Glass which is a nice departure. 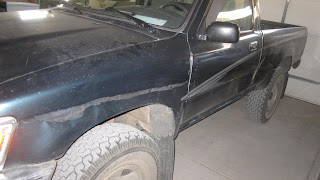 And we're onto a new adventure. Returning from town Monday after dropping my car off, a car rounded one of the corners on our two-lane road, in our lane. He was fully in our lane but Ian has very fast reflexes and was able to leave the road for the field. This left the front of his car sliding along the side of our truck. Our damage is minimal but he was picking up pieces of his car from all over the road. I'm not sure I could have reacted as quickly as Ian.

We didn't file a police report and now the driver is saying to his insurance that the nice driver lady said the damage to the door was minimal and she wasn't going to pursue it - after all he was barely in the other lane. The insurance agent wanted to know if there were any passengers. Red flags! We are going to file a police report tomorrow with the sheriff's office, since this is county. And here we are, less than a week from our family gathering. It's always something isn't it?

I do hope you'll avail yourselves of the rancher-witness to back up your story. The guy sounds like a crook!

Oh Sharon, I can't believe you guys didn't at least call it in at the time. The guy must have been drunk off his butt and thankfully he didn't kill anyone, this time. I don't care if it's the Pope, I report any accident and those include the sneaky stealth hit and runners in the market parking lot dang it. As someone who had their parked car totaled in the dark of night by a drunk driver
who hit and ran, I take even little fender benders quite seriously.

I got warned the last time I left the scene of an accident that it was against the law, even if you exchange insurances and it was on private property. I think the guy was just being a jerk (the cop), people do it all the time, my insurance lady said. I hope you guys don't run into any trouble with it.

I do hope things turn out oké for you.

I have a basket exactly like yours except mine is purple where yours is blue. I love that basket.

All the food you gets from your CSA looks wonderful.

I hope you get everything straightened out with your insurance and the Sheriff's office.

Well, I love the towels, even if they are close to the Fiesta ware colours. You're right about the CSA box. That is a good deal for what you're getting.
I hope the accident details all work out. I knew someone who had a drunk kid hit him and the father ended up reporting it, saying he'd was driving, not the son. Ended up being a bit of an issue until they fessed up.