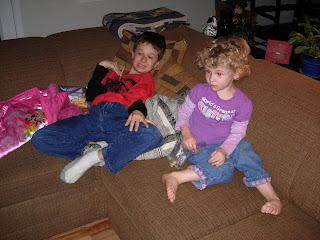 We babysat this weekend. The kids arrived just hours after I got home from the Guild meeting. Ian wanted to watch a football game. Kiernan accepted that and went upstairs to play with his Legos. Alexia wanted to watch a "mobie" and clutched three DVD cases to her chest. She'd say, "Can we watch my mobie now?" and Ian would say we're not going to watch one this week because I'm watching a football game, to which she'd sweetly say, "Oh" and wander off. After she had repeated this about four times, Ian decided maybe the game wasn't so important after all. 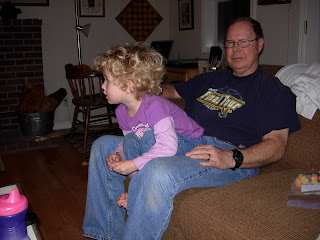 With her sweetness, she won her Papa over, and happily clamored onto his lap to watch her "mobie," which was nothing more than episodes of a TV show they have seen over and over. They were excited to share the shows with us and gave a running commentary. Ian said she had turned him into a human jungle gym. 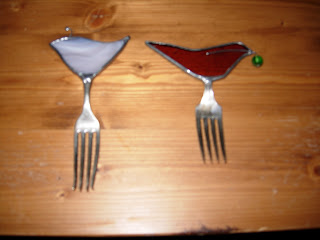 Look what Amy brought me back from Tucson for my Christmas present. She told me that she wanted to wait to shop there since there are so many artsy places. Can you guess what these are?
Posted by Sharon at 9:21 AM

Hmmmm, forks? lol jk, both are birds, one is a quail, the other a cardinal? Not sure exactly, but I would say definately birds...

Mysterious bird-forks, indeed! Do you put them in plants as decoration?

I can totally see how a grandpa could be talked out of a mere game by such an adorable tow-headed gal requesting a "mobie"! So cute!

Well, they are clearly stained-glass enhanced forks for disabled folks who have have a had time grasping the slim handles of ordinary forks. I didn't know YOU had such a disability, though. :-) I guess you could use them as corkscrews; stick the tines in the cork and use the wider top to twist them out....

Boy, what grandpa could resist that face? - love the new plant decor - T.

I would say that Papa is a sucker except that's how she gets away with stuff at our house too :)