More new than the new year 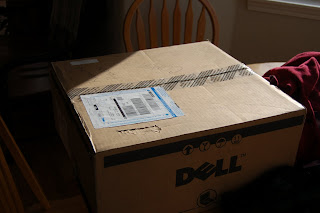 This is the box that I have been chasing since last Friday. It's my new laptop which was supposed to have been delivered between Thursday and Sunday. I knew I was in trouble with the snow, but when I got to work on Sunday and listened to my messages, I was stunned to hear a guy say, I'm at your gate but it doesn't appear that any one is home - call this number to schedule another delivery. But - we were home. The weather conditions were wretched, so I'll give him that. I called and requested they hold the package for me to pickup on Friday, today. We can barely manage the roads ourselves, and since three delivery trucks and one garbage truck have been seen being towed, I didn't expect a delivery to be possible.

Ian and I went in to pick it up this morning, but the dispatch guy forgot to put a hold on my box and it was on the truck. Hooray for cell phones. I called my neighbor and told her we wanted it delivered to her, which was fine. She said her husband was out in his tractor, working on the roads, so the delivery should be okay. We passed this information to the counter clerk. Our cell signal is poor out here in the nowhere, but we can text, so she texted the delivery guy to drop my computer at the neighbor's. Ian worried about how fixated she was on the Tom's tractor. I was in CostCo and got a call that the computer has been delivered. I called Carole and she says, nope, nothing. So I called back DHL and they had Tom's signature, which means he must have taken it on the tractor. He ended up taking my computer in his bucket, since there's no room on his tractor for a box, and he dropped it off at our elderly neighbor's house. Many cell calls later, we knew where it was and picked it up this afternoon on our way back home. It makes a good story. 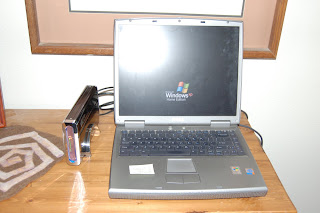 This is my old computer, attached to it's brain. I can't believe that in three years, it became too small, but I have loved it just the same. When I bought it, a 40 gb hard drive seemed huge. It's so full, that it doesn't run - it groans. Note the yellow sticky - my high tech reminder system.

While this computer may not look a whole lot different than the old one, it's hugely different. Most noteable is the Vista operating system - a HUGE learning curve. It's much lighter than my old one and fast - no more groaning during operations. It does have a ten-key pad, which seemed cool when I ordered it, but I haven't found a reason to use it yet. This is when I feel my age. I'm not excited to explore the changes - I don't want them at all. But white woman speak from both side of mouth - I don't want change, I just want speed? Doesn't wash, does it. 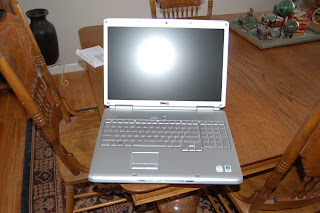 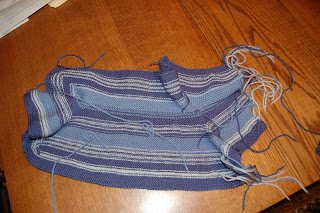 This is my first post from my new computer. I need to do something I understand, like sew in some ends.
Posted by Sharon at 6:07 PM

Congratulations on that new laptop! Hopefully it will take a long time to fill!

Have to ask, what are you going to do with your old lap top?

Love that piece you are working on, it looks so professional!

Yahoo for new technology - can you believe that 10-12 years ago, we ran our whole office at work on a computer with 640K!!!!! Now we have two huge servers and it doesn't seem enough!

Ah, computer upgrades. May it be a long time until I have to be blessed with one!

That nearly-finished object looks suspiciously like a Baby Surprise Jacket, but I'm confused by how all the colors on the right side just end, instead of wrapping around like they do on the other edges. Guess I will have to wait and see!