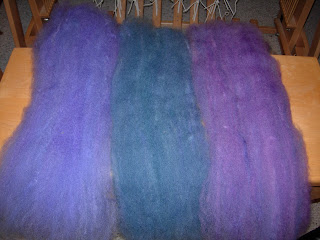 I thought I'd answer Leigh's questions about dyes in this post. I sprinkled five colors, which appear as three in the Coopworth/Salish locks. I used cornflower, indigo, hibiscus, mulberry (purple) and cedar (deep teal). I have learned that a little bit of purple goes a long long way.

I carded the three colors separately on my drum carder, a well-used Patrick Greene Deb Deluxe, and then stripped them into fours pieces and ran them through the drum carder again. 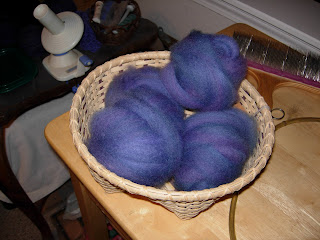 The colors are more subtle than I would have liked so I think when I prepare the Border Leicester locks, I'll separate the colors, card them and pull them together into roving at that point. This prep is too blended for my taste.

I ordered more dyes yesterday morning from Carolina Homespun. They don't show the color palette, but that can be viewed on the Louet website. They're pricey, I'll admit, and Carolina is a tad cheaper. They've lasted me a long time though, since I use the Procion dyes for big jobs in the garage.

I replaced olive and raspberry and ordered lily and pumpkin which will be new colors to me. They say that one cap full will dye two ounces of fiber. I like to weigh the locks, put them in a pot with water, about half as high as the locks, then sprinkle a little of the colors I want to use into the caps, until I think I have the equivalent of a cap full. When the water begins to simmer, I sprinkle the dyes over the locks, tamp the locks into the water and moosh them around a little, then let them stew for a half hour. I have yet to have them felt, and I get almost full take up of dye. 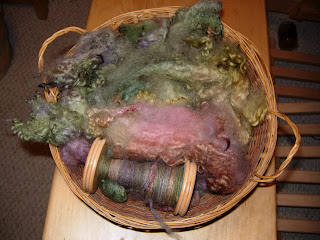 These gorgeous colors were the aftermath of a dye day where I poured the leftover dyes onto locks, wrapped them in Saran and steamed them. I didn't have any idea of the strength of the dyes of the weight of the locks. I had way too much dye and had a terrible time getting it rinsed, with the result that these locks, beautiful as they are, are badly felted. I've tried to spin them in the locks, but it's too hard on my fingers. 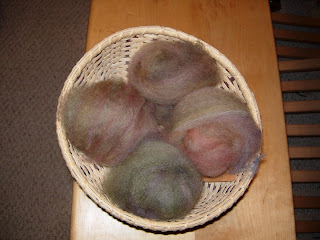 My com-
promise is to tease the locks and run them through the drum carder one time. There are lots of bad bits, but I've decided they're going to create novelty yarn that will look unique in felted bags. It's either that or throw the whole mess away, and that still could happen.
Posted by Sharon at 6:56 AM

Not too blended for me!

Nice colors! I have to agree (purple fuzzy mittens not withstanding ;-) I think I know what you were going for there and the purple/teal/blue blended too thoroughly, maybe the colors were just too much alike? Next time I come to Reno, can we have a dye day??? Please?!?!?! Maybe get Linda and Amy and Mim and whoever else to join us. I will bring gifts! I promise! :)

The carded balls of "love" in the last picture, the bakset of balls, are wonderful! The blue is very blended but looks nice, so not to fret. It's just not what you wanted. Your fiber is great!

The colors are luscious!!!

I'm all for spinning novelty yarn and using all the fiber. To me it's more interesting, not to mention less wasteful, to spin whatever comes along and end up with a product that doesn't look like I bought it at Wal-Mart.

Yum! Gorgeous colors!
You have a PG carder? I'm so jealous!

Wow, you got some very cool results!

Ooo, a PG drum carder! Lucky you! The colors are gorgeous, both before and after blending. I love color, well blended or not, though I have to admit that it's more fun to spin something with some variation in it. Thanks for doing this and letting us see. Thanks took for the source!

How interesting! I have a friend who does magic with Cushing Dyes. You post reminds me I need to get back into dyeing...maybe I need to look for a white sheep at BSG this year! LOL!
I can't wait to see what you'll come up with next! :)

Oohh, pretty - I haven't had the courage to try dying yet - won a Koolaid kit at our spin-in last fall, but haven't had time to look into it.

The little bag that Neelix is so lovingly caressing is a 'nip bag that I got him last summer - he has managed to destroy both of them, altho it took him longer than I thought it would - we had catnip all over for a week! Preferential to the stuff he brings in from the barn, I guess...

I'll let you know when the purse arrives. T.

Hi again Sharon. Please stop by my blog for something.