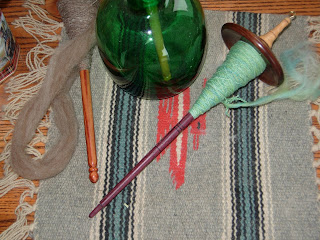 This is the the replacement spindle that Amy brought me back from Tucson. She bought two more herself and ended up buying one on behalf of another guild member. These are made by Ken Ledbetter, who after retiring, made a craft fair business of wood-turned wine bottle stoppers. He's new to drop spindles, but they've been so popular that Woodland Woolworks and Carolina Homespun are both carrying them. Boy, does mine spin and spin. 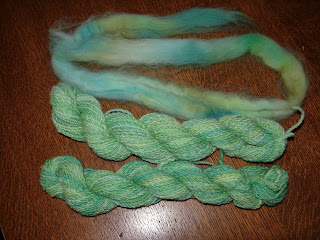 This is my first drop spindled yarn. It's still pretty thick and thin but I'm calling it novelty yarn. 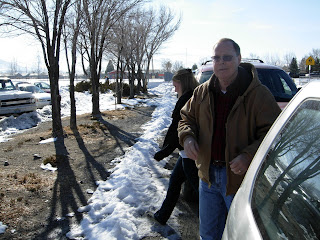 We're at the Nevada caucus, where our first step is to find a safe path through the ice and snow. It was a very interesting experience, but not very representational of the population at large since you must be available that this moment, whereas a primary is like an election and goes all day. That said, I enjoyed myself tremendously. It's the most political thing I've ever done. The disappointment was that about 100 people changed their party affiliation at the sign-in table and voted for the candidate that they think can be beat in the general election. Politics as usual??
Posted by Sharon at 5:54 PM

I think your drop-spindled yarn is lovely stuff. Funny how those spindles hold no appeal for me, though....

Oooh, that yarn is such a lovely color - Guess what! I got your purse in the auction :-) I can't wait to get it in hand, it's so pretty.

Trying something new for dinner - I'm making chili! I've never made it before - had some at a friends that was good, and she kindly shared her recipe - I'm making cheesy-corny cornbread to go along with it.

We had a windy day today, and COLD, but not snow and the sky is beautifully clear (we'll have to watch for Northern Lights tonight - I think I got an email from the U of Alaska that said there was going to be "action" this week.

Good for you for going to your caucus - ours is the first weekend in Feb. Should be an interesting year.

The disappointment was that about 100 people changed their party affiliation at the sign-in table and voted for the candidate that they think can be beat in the general election. Politics as usual??

Huuuuuuuuuh? And that solves what?