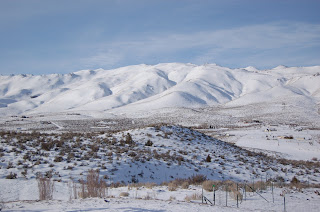 The snow - it's still here. I think we've had new snow or blowing snow every day all month. 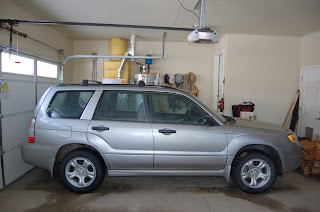 This is Eleanor. She has pushed me through drifts deeper than I could have imagined. From my experience, the commercials aren't a mock-up - Forresters really do plow through the snow, but it's not fun unless you're the professional with a film crew. My picture doesn't capture how dirty she is - she's dirty and she earned it. 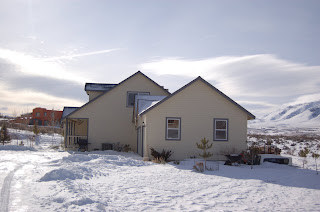 Those drifts in front of the house are a mockery of what Eleanor has negotiated this week. In the midst of beefy trucks, she has held her own - to my huge relief. Phew~ 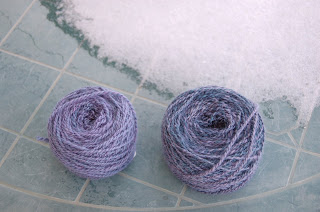 So I tried to photograph the difference in ways to blend on the drum carder, and it just doesn't show up. The two skeins are different enough that I plan to contrast them in a bag. I separated the colors into two pathways, carded and pulled them into roving to spin for the right skein. I do believe the difference will show when knitted, it just doesn't show up when photographed. So what's new, eh?
Posted by Sharon at 5:35 PM

Good to know about the Forester -- I've been thinking that it might be my next vehicle (in a couple of years). My little Escort just doesn't negotiate the snow very well, though she has been a very dependable car.

I *love* the colors of the yarn -- they blend nicely with the tiles and snow as well!

Ugh...we've had the same weather. I'm so over winter! ;-)
I can see the difference in the yarns but it is subtle.

If you biggify the pic with the yarn you can see the color differences better. Very nice :)

the difference between the two yarns is clear on my monitor. Nice work.
BTW...you've made my day. Check my blog.