This is pretty much how we spend New Year's Day. There's another table with California rolls, and the sushi, tako and sushimi are out of camera range. My SIL has gone to this even since she was 14 and hasn't missed a one. Adding generations and ex-spouses and finances, the assembly is mind boggling, and the food never stops coming.

I came for the first time twelve years ago, and I swear Omar and Stephen were devaining shrimp then. Now they have girlfriends and college educations. It all started with mom, dad, five brothers and friends and now is multi-generational, including the friends. What a great tradition. 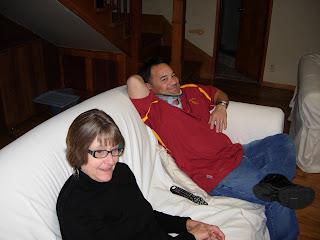 Don Jr, or Don Don as he is sometimes called, and and I are watching the USC game. He is alum, hence his SC shirt, Christmas gift from his son, Don, now called Junior instead of Don Don Don. Donnie is wearing a cervical collar. This year had a brush with tragedy. The night after Thanksgiving, he took a dive into a shallow wading pool, thinking it was a lap pool. Several couples were enjoying a hot tub and he just wanted to cool off. Long story short, he broke his neck and spent five terrifying days, not knowing if he would wake up from surgery paralyzed. He'll regain 75% function of his neck. He has a good reason to smile - and SC is winning.
Posted by Sharon at 12:31 PM