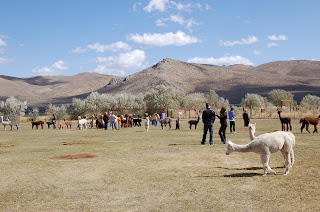 Today was the 6th Annual Alpaca Farm Fiber and Craft Festival at Jeanette Miller's ranch. It's five miles from us in the next valley and since our guild was invited to participate, I had marked it on my calendar months ago. DD Chris asked us after we got back from vacation if there was any chance we could watch Alexia last night. Sure! 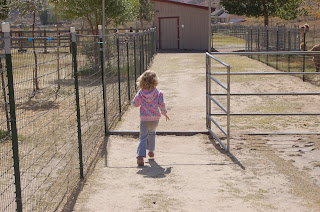 Lex was so excited that she skipped from one gate to the next, knowing that she would have to wait for me to catch up with her. I kept reminding her that if she did that with the animals, they would run from her. 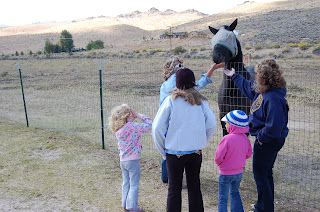 Jeanette is very proud of her rescued mustang and is reassuring him, explaining to us about the screen protecting his eyes from the flies. Lexie Lu wanted to know why this horse wears his underwear on his head. 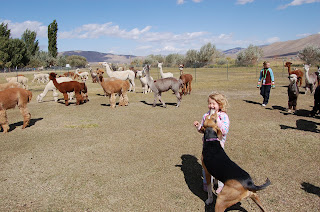 Jeanette's Walker hound Bond, as in James Bond, was very attentive to her and kept giving her kisses. She says he was giving her germs. 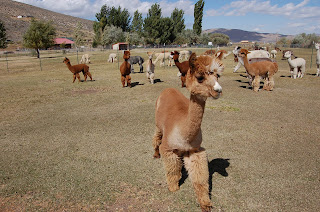 Alpacas are so different from llamas. They're friendly - some more so than others. 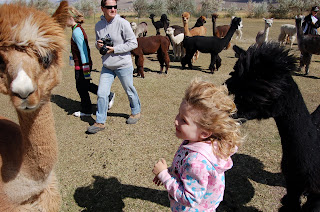 Alexia and the alpacas got along very. She had been so excited for the last couple of days and then all this morning, I wasn't sure a 5-year-old could curb her enthusiasm, but she did better than fine. 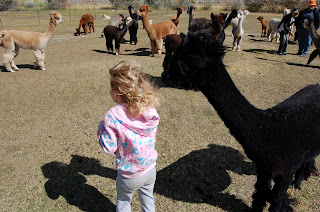 I'm not sure what caused the attraction, but this little black alpaca took to Alexia and followed her around - which was fine with her. He nibbled at her neck and nuzzled her hair. 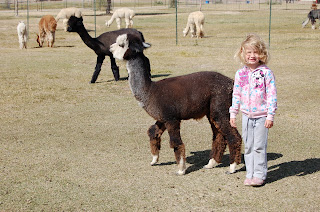 Lexie had a wonderful time and wants us to get a 'paca. She is bummed because the next festival is years away. I told her no, that's is just one year from now - once a year, like Christmas. I think she wants to come back. 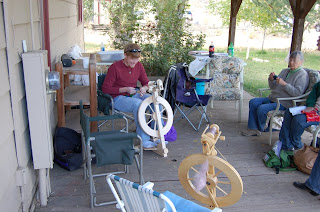 This is David. He's a full-time college student who has raised llamas for 15 years. He sheared Jeanette's entire flock this year as well as some various sheep, including our wethers. He and Toni were recently in Oregon and visited Woodland Woolworks to pick up his wheel and to put her's on lay-away. She said that finding it was pretty just as I had described. Now she has to go back to pick up her wheel. I wonder if she needs company on the drive.....
Posted by Sharon at 8:56 PM

Looks like lots of fun Sharon, wish I could have been there!

Oh my what fun! Those 'pacas sure are cute I'm with Lexie,
I want one! Maybe I should send my Bond over to meet their Bond???;-) How ideal, one horse, no big trees. I'll bet he keeps his fly mask on!
Did I hear mention of road trip to pick up a loom at Woodland Woolworks. I'd have my bag already packed waiting by the door. What loom did they get?

What a wonderful day with Alpacas! How special to have Lexie to enjoy the day as well.

Wow, does that look like fun. Alpacas are just the cutest things ever, aside from Lexie, of course. :-)

Looks like a fun day and something Lexie will always remember.

That black fiber you commented on at my blog is alpaca. It is nice, fine, and smells like it came from a male.

Loved the Woodland Woolworks post, since I too have purchased from them over the years.

Looks like you and your family had a great time especially Lexie. How many alpaca do they have?

You know who to call if you come back this direction! :-)

Those pictures of Lexie with the alpacas are great!!! It all looks very fun!!

DH says Lexie reminds him of our girl at that age.

I agree about not using mercerized for dish towels. I'm trying to think of things I use mercerized for. Hmm. A girl's poncho, holiday placemats and runner (though I use unmerc for all our casual textiles, it's good to have a merc set of placemats for when company comes), knapsack fabric (close sett)...

A dude who spins? That's kind of hot.

Lexy's hair looks like "paca" hair. When I told her where she was going to be going she was *not* excited at all. She sure changed her mind real quick like. She is loving her one on one time with you guys. It sure makes her feel special.