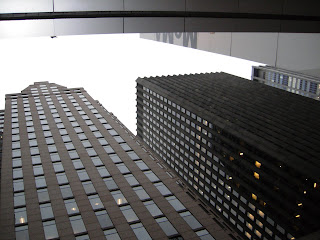 These are the buildings outside MOMA. Little Sharon said she was disap-
pointed when she got to the place we were staying, because she expected New York to have tall buildings. These are tall buildings and I probably what people think of when they think of NYC skyline. 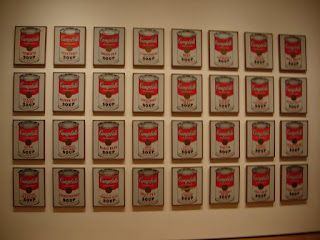 This from MOMA. It's the only picture of the exhibits I took but I just had to - Campbell. It was our first visit to MOMA and we flew through in a mere 3 1/2 hours. We were unaware that the museum opened to the public on Friday nights and by the time we left, the building was flooded with art fans. Retrieving our coats from coat check was an experience all in itself - a good one, thanks to humorous and creative staff. 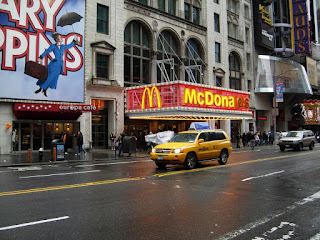 I couldn't resist the Mc-
Donald's marquee in Times Square. I think it speaks volumes. 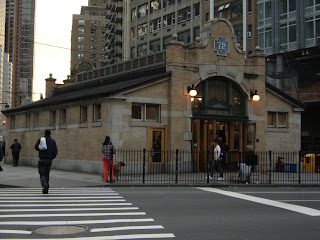 We were staying in the Upper West Side so this was our subway stop. It's just north of where Amsterdam and Broadway cross and that is the source of a lot confusion. This is the oldest subway station and about a half mile walk for us from Rochelle's apartment. 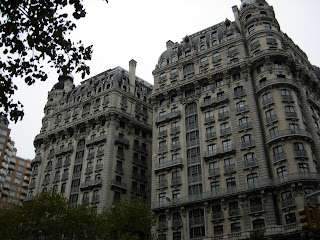 It is also the site for the Ansonia, built at the turn of the century. It was another residential apartment building that was slated for the wrecking ball, but was converted into condos in the 1990s. 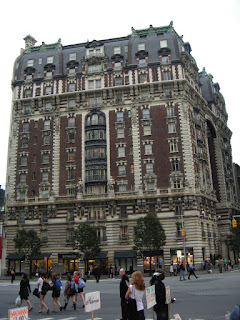 Another fascinating building at the 72nd Street subway station is the Dorilton. It was built as a masonic temple but has been since reclaimed into yet another apartment building. I can't help but be fascinated by the mansard roof and gargoyles. Who doesn't love a gargoyle. 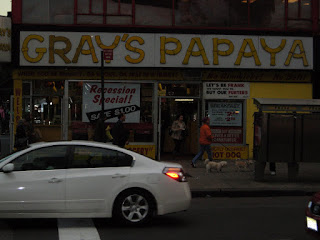 Also near the subway station is Ian's favorite NYC fast food - apart from chocolate chip cookies and bagels - Gray's Papaya. You get two hot dogs and papaya juice for one low price. I love the lady walking her dog. Irony? 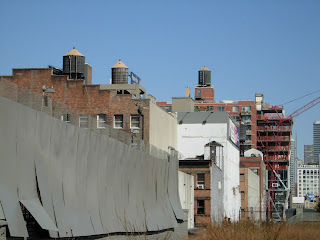 Michelle expressed surprise at the water towers. They're actually required by law for fire purposes. It's difficult to pump water to the top of buildings in the the case of fire, hence their existence. I'm not sure how effective they are but I think they're cool. 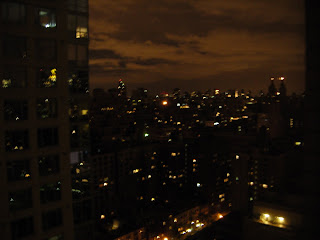 I took this picture from the kitchen window one night and I hope it emparts the energy of the city at night. We didn't partake.
Posted by Sharon at 8:33 PM

Looks like you had just a fabulous time. All the beautiful buildings - somehow, one doesn't think of that in NYC. Thanks for sharing them. T.

I've really been enjoying the architecture posts! Great pictures and so nice to see these buildings through another's eyes. I never would have noticed some of the details.

I am so glad you had such a good time in NYC. Thanks for the wonderful pictures and comments.

I'm so happy they didn't destroy the Ansonia. What a beautiful building!!! I'm also a gargoyle fan. So ugly their cute.

More great pictures of your trip!! Thanks for making NYC seem so enticing!

My husband's favorite juice is from Papaya King - across the street from Bloomingdale's. It has a bazillion signs inside about the health properties of papaya juice!