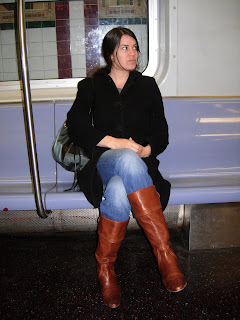 Little Sharon, who lives in San Francisco, wore these boots in New York (subway shot). I learned very quickly why these boots are practical. When it rains, your legs stay dry. I, on the other hand, brought Keens and my pants in the rain were wet half way to my knees. 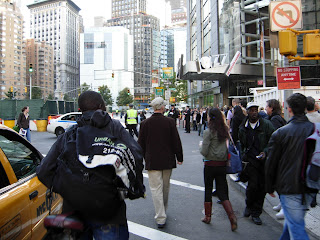 Please note the woman in the center - those are the boots I'm talking about. We had just left the Museum of Art and Design at Columbus Circle, now my most favorite museum in the world. 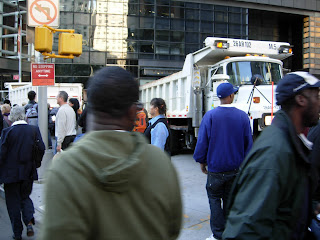 It got weird in a hurry. Police were every-
where and two dump trucks were backing up together in front of the Time Warner Building. Ian wondered if there was a bomb threat. 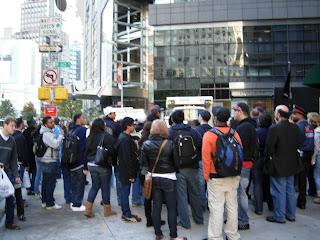 It was pretty strange because with the blockade and police, there really was no where to go. Lights changed but no one could cross so we thronged - is that a verb? To throng or not to throng. It wasn't the quesiton. We thronged. 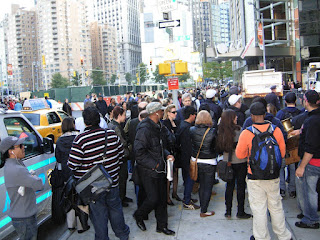 I asked one of the many policeman who said simply - The President is coming. Ah hah. He was coming to The Mandarin which is in the Time Warner building. That explained the blockade and resulting throng. What I want you to see is the astounding propensity for New Yorkers to wear black. 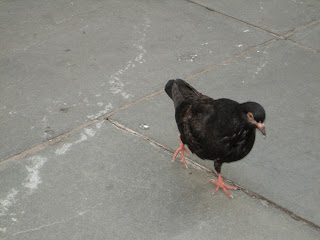 Sitting outside of 30 Rock watching the ice skaters, I had to laugh. Even the pigeons wear black. If you're going to New York, here's my advice. Pack black. 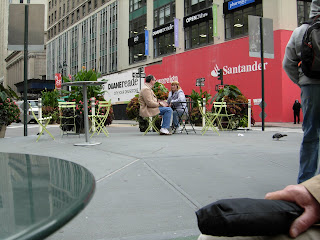 We stopped for a sit-down at Herald Square. There's only so much the feet can take. I realized when I saw the couple sitting across from us that fashion in New York has a very elastic definition. 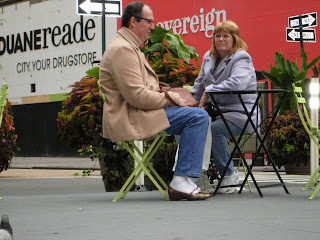 Check out his shoes and handbag.
Posted by Sharon at 9:26 PM

When we were in NYC many years ago I noticed that everyone wore black and then dawned white sneakers while carrying the latest leather backpack or briefcase. Fashion there is certainly different than where I live!

Black. Guess it goes with everything. I do like the boots but I'm so darn short they would look goofy on me.
I would have noticed the shoes and handbag. What can I say? Each to their own.

Okay, maybe the man and woman have about the same size feet and the shoes were bugging her so he kindly traded for a while to give her a break? On the other hand -- the purse DOES match his jacket. Hmmmmm.

What if you're a person who doesn't look good in black? (Like me)

Maybe that's why I don't live in NYC!

I think any major city's dress code is Basic Black, Sharon. It's that was in Auckland, NZ and Sydney, AUS as well. You just can't go wrong with it.

Here's to black! It's one of my favorite colors to wear, even if it doesn't flatter me as much as some other colors. And it's slimming! ha

Hey, I recently bought some brand-new Keen BOOTS on eBay! They are waterproof, and I actually got them to replace my barn Much boots because they were cheaper than Mucks. Maybe I need to book a trip to NYC first so I can be dry and fashionable, THEN bring them home and get them covered with manure!