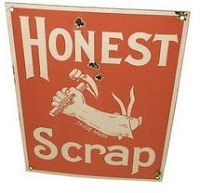 Some time ago Bonita at Basically Bonita gave me that above award. I was completely unaware of Bonita's blog until I received this from her. The moment I started reading her blog, I fell in love with it. I think that's the point of the awards - to help us discover other bloggers who share our passions. Please wander over and see what she's up to. Lots!!

Awards take some time so I've put it off, but now I'm doing laundry and packing for New York, so this seems to perfect sit-down activity.

The rules of accepting this are as follows:

1. Choose a minimum of 7 blogs to give this award to that you feel to be brilliant in content and design.

2. Show the 7 winner’s links on your blog and leave them a comment informing them that they have been given the “Honest Scrap.”

3. List 10 honest things about yourself that people may not know.

So, seven blogs that I feel to be brilliant in content and design? Well, I can’t tag Leigh because Bonita already did. I think all the blogs I read are brilliant - that's why I read them, so I've chosen some of those who have helped me develop as a fiberist.

1. Becky, my fellow Nevadan and friend, is a shepherd in the middle of the state, an Etsy store shopkeeper and the best spinner I know. Because of her isolation, she taught herself to spin on a drop spindle!

2. Boulderneigh - Michelle raises Shetland sheep, the most perfect of all breeds, and has promised me a black fleece for next year. We finally actually met last month and she had to turn her life on its ear to do so. She writes of sheep, horses and the Pacific Northwest.

3. Fun with Fiber - Barb retired and opened a weaving studio immediately thereafter. Because of physical limitations, she's unable to weave as much as she would like, but did that stop her? Nope. She volunteered to help Syne Mitchell edit audio interviews for the Weave-Cast podcast, even though she'd never done it before in her life. I heard her work and she did great!

4. Fibertopia - Valerie's is one of the blogs I've read the longest and has helped me in a crunch many a time. She is a wonderful weaver and also reads great books. I look at her Library Thing link for book suggestions.

6. Crazy as a Loom - Hilary also lives two time zones from me. She retired from nursing to run a weaving studio and also weaves on commission. She makes beautiful things, and she loves cats - what is it about us and cats?!!

7. Camp Runamuck - Theresa is an accomplished weaver and has also helped me figure out things when I get stuck, even loaning me an instructional DVD. She and her firefighter husband have a small menagerie and she lives in my time zone!

Let’s see -10 honest things that people may not know about me, and let me say that this part is a piece of cake, compared to picking seven blogs:

1. My parents were so old when I was born, that my father was born in the 19th century.

2. My parents lived in Fairbanks but I was born in Seattle, because at the time Fairbanks hadn't any hospitals. Too bad, because I would love to say that I wasn't made in the USA - Alaska didn't become a state until later.

3. I grew up on a small organic farm in East San Diego County.

4. I didn't walk uphill both ways in my bare feet to go to school, but I did walk a mile to catch the school bus.

5. The place where I bought my first soap-making supplies, Summers Past Farms, was my high school bus stop. It was ratty back then, but it's still owned by the same family who made a purse out of a sow's ear.

6. My mother taught me to knit when I was nine, and she was taught by the Red Cross as part of the WWI war effort - knitting socks for the boys overseas.

7. I ran a 10-K fun run in costume and got my picture in the newspaper. I was a bride. For those of you runners, think about running fast down a steep hill in a full-length dress. I was terrified.

9. I started drinking coffee with my father after he got home work while I was still in high school and only like it dark, black and strong.

Reading your list of ten taught me a few new things about you, friend. (YOU DON'T LIKE CHOCOLATE?!?) Thank-you for the award, even though I can't see any possible way that I could have inspired YOU as a fiberist! You are so much more advanced at all things fibery than I am....

Sharon you are so generous! Thank you for the nice things you said and say all the time.
...pst, I dont think that was a 'leak' so much as a sploosh lol
hugggs!

Okay, so I'm curious. Just how old were your parents when you were born? For your mom to be knitting socks for WWI...

Thanks for the great comments on my site!

Thanks for your kind words and the award!! I appreciate it!

My husband was just fessing up to the fact that he won't tent camp any more. (People had been suspecting it was me....but NO!)

Have a great trip to NY!! Can't wait to hear about it!!

PS: No wonder you can make chocolate mint soap....I love chocolate, and I think chocolate soap would make me at least a little more insane!

Ha! Well, Leigh still has it to post on her blog and "do" it! Congrats though, I think you really deserve it. (Even if you don't like chocolate :)