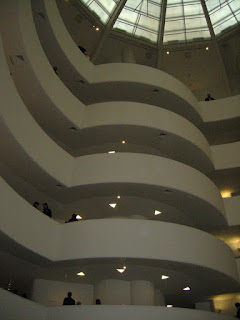 The first museum we visited was the Frick Gallery and I didn't take a single picture. We were provided with the hand sets to listen to a guided tour but a special feature was about the architecture of the building. Frick had built his home to be an art gallery so it was a two-fer, art and architecture. It's unique in all my museum tours and I recommend it.

Our second and highly anticipated museum was the Solomon Guggenheim. They celebrated their 50th anniversary this year with a Vasily Kandinsky retrospective and no museum is better designed for a retrospective than this one. You simply start at the bottom of the spiral walkway and proceed up. I loved it. Once again I passed on the Met as too overwhelming. 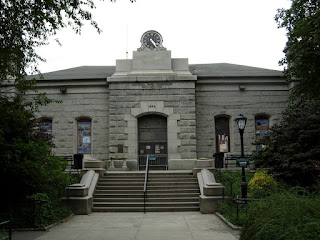 This is the Central Park Reservoir, South Gate House, built in 1864, the same year that Nevada achieved statehood. 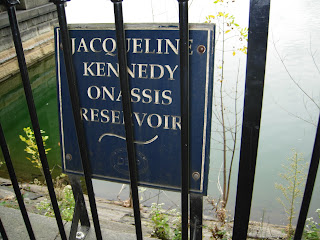 The reservoir itself has been renamed. If you read Caleb Carr's book, The Alienist, you will remember the reservoir as a part of the historical story. Times have changed. There's also a Dianna Ross Playground. 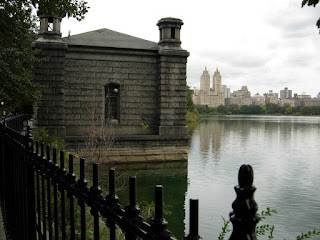 Looking past the gate house and across the reservoir, you can see the twin towers of the San Remo in the distance. Joggers like to run the perimeter of the reservoir which is almost a 10k, and we saw plenty of runners. We also saw a lot of pedicabs with Turk and Armenian drivers, asking if we'd like a guided tour around the park. It's truly a cosmopolitan city. 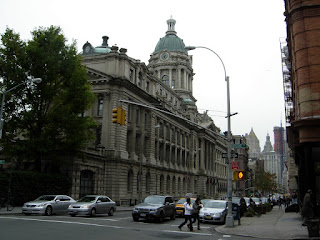 This is the old Police Head-
quarters in SoHo, built in 1910. It was sold in 1983 to a real estate developer who turned it into a 55-condo unit. It's locked away from the public but I'm okay with that since they're using it and keeping it up. 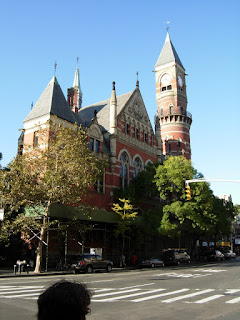 This is the Jefferson Market
Courthouse "Old Jeff," at one time voted one of the five most beautiful buildings in America. It became infamous as the setting for the murder trial of Stanford White in 1906, but was slated for the wrecking ball in 1972. Greenwich Village was able to raise enough for its stay of execution, and today it is a branch of the public library system. 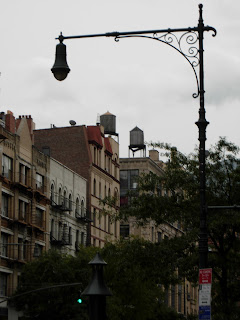 And the water towers. They are such a ubiquitous part of the Manhattan landscape. I have looked for a piece of artwork featuring them on every trip we've made and to no avail, so I tried to take as many pictures as I could with my little point-and-shoot. I have more architecture pictures so if that's not your thing, you might want to skip my next post~
Posted by Sharon at 4:23 PM

Great pictures!!! Makes me want to visit NY myself!

I love how the Guggenheim just goes up and up and up.

Architecture: so very much my thing! You're giving us such a great tour, I'm getting a little desperate to go!

is that sunshine I see in the photo of "old Jeff"? Can't tell for sure...we haven't had much of it during October, so I sort of forget.

Oh how neat! I missed all of those things on my last trip to NYC.

No one has ever shown or told me that NYC has water towers! That seems so odd; I'm used to seeing water towers in the very small towns of the midwest, and never would have dreamed NYC would have any.

wow, awesome buildings! Ok, keep this up and you might convince me I need to go see it for myself!