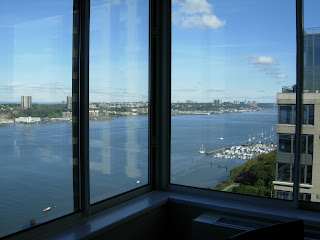 We got back from Manhattan yesterday afternoon after an all-day flight that took us through four airports. I don't know where to start so thought I'd start with the first photo I took, from the dining room window looking over the Hudson River to New Jersey and a tiny bit of Washington Bridge on the upper right. 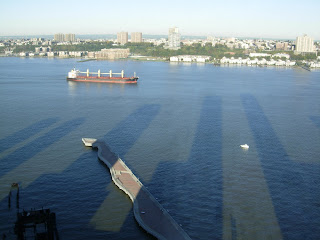 Ian's brother and sister-in-law bought this apartment years ago when Neil was back in New York a lot. We are fortunate that they have been so generous with us. It was rather bittersweet that we observed the 5th anniversiary of Neil's death date while we were there. He absolutely loved New York. 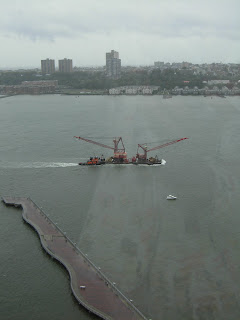 I was fascinated by all the shipping activity on the Hudson and took a lot of photos that I won't attempt to blog, but I will bore you with NYC for another week or until I get the laundry done and my house clean. On this particular day, the forecast for rain was 100%. I have never experienced that forecast before. It rained all day and we took our umbrellas out into that forecast. I also have never poured water from a folded umbrella before. 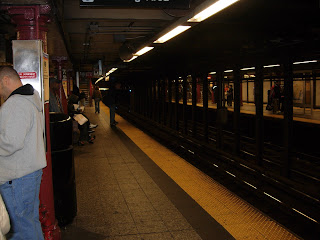 Though he couldn't swipe a subway pass on the first time to save his life, Ian fell in love with the subway system. 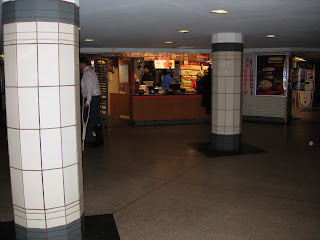 A whole culture exists below ground in this maze called the subway - shops, clothing stores, and the odd ball street entertainer. With so many art institutes nearby, many are genuine artists. We heard a baritone singing "Ave Maria" and I thoroughly expected to see a large black man (think "Old Man River") and so I was surprised to finally come upon a small Korean man with this huge voice. Little Sharon was with us and teased me about being a racist. 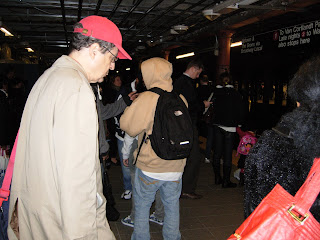 There's a reason why it's called Rush Hour. There's room on the subway cars for everyone waiting for that train, every last one.

In her book, The Girls Guide to Hunting and Fishing, Melissa Banks records the Burma Shavesque poem on the overhead beams at the Time Square transfer point: "Overslept. So Tired. If late, Get fired. Why bother: Why the pain? Just go home. Do it again." I had seen it a few years ago and now it's there but now in a permanent form and I was thrilled to see it.
Posted by Sharon at 9:03 PM

Sounds like you had a great trip - rain and all. Nothing like a long day on lots of planes to make you appreciate finally getting to your destination!

Good luck with cleaning up and getting your house re-started! Looking forward to hearing more about the trip!

Afraid it is not a great time to be in New York....not if it is raining in the city like it is upstate.
I wish you could come and visit....you are so much closer than you usually are!!!
Have a great time anyway.

Will love to see more of your trip Sharon! I want to see the Statue of Liberty but I don't want to ever set foot in NY; too many people, I would be a nervous wreck! I want to take a ferry from Myrtle Beach SC and see it from the water LOL

It's one of the places I've never visited -- love the photos of the water. Glad you're home safe.

Happy you had a good time in New York. Pictures are wonderful and can't wait to see more of them.

Now the fun starts unpacking and getting your life and house in order.

I have been to NYC twice and have had a great time both times. I am hoping to go back another time with DH who has never been. I love the shopping there and all the great places to eat. Who would ever cook there again after seeing all those great restaurants? The fall is great time to visit as well as the spring. I hear the big dept store windows at Christmas are a must see every year.

Welcome back, trips are nice but it's always nice to get home. Looks like a wonderful trip, even with rain.
It is amazing the whole culture underground isn't it. I can't imagine living in a city these days, heck, wouldn't even want to do an in town location, but they sure are fun to visit.

I have been following your journey on FB and it is nice to get more photos... the ones of the river are especially good shots! Looking forward to more.. and also glad to hear you are safely back home.

I can't wait to hear more about your trip! I just love the idea of New York, though I have only barely passed though it.

New York is so wonderful. I have many fond memories of the years I spent there. I'm glad you had an opportunity to enjoy it. And rain is actually good -- cleans everything off.