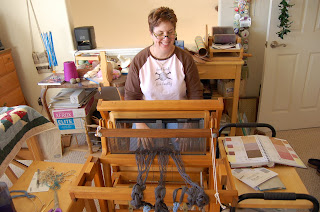 Jeanne was given this little itty bitty loom by a woman who came into the Jimmy Beans shop. She said it belonged to her mother and would Jeanne like it. Jeanne had it in the back of her truck when she were at Allison's for a spin-in a couple of weeks ago and it was a mess, covered in cobwebs and the feet water stained. 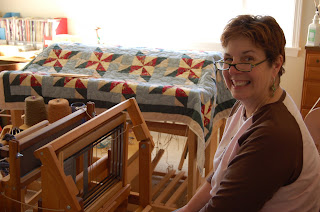 We squose everything out in my studio so we could have a work area and we started with an 8" warp. The original owner was from Stockton, California and had commissioned this loom from Mr. Gilmore. It's so light that Jeanne can carry it by herself. 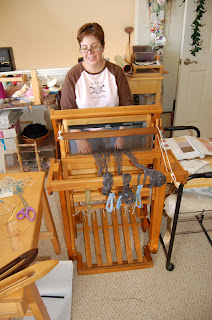 Jeanne cleaned it and polished it up. It's an admirable little loom - I could like to own it. I told her to get Debra Chandler's book, which she did, and she read the preliminary information. She was primed and ready to go. I took Bonita's advice and showed her how to warp from the front since there are fewer steps. Jeanne sailed through it. We had mistakes which are wonderful because they are learning experiences, but we caught them in time so that when she pressed on the treadles, there were no sleying or threading errors. It was awesome. 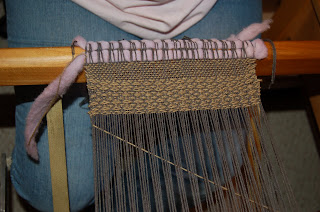 We chose Birds Eye twill and here's the beginning of the fabric. We were about five hours into the project at this point and Jeanne's eyes were looking south towards home. The light was fading with the short December day and that was a lot of learning to pack into one day. I had so much fun. Her enthusiasm was infectious and I am antsy to get back to my own projects. Thanks Jeanne!!
Posted by Sharon at 6:54 PM

I like Jeanne's little loom - there's something really appealing about small looms...and she looks like that cat that got the cream!

Wow! How cool is that. I wish someone would give a loom like that to me too! I would love to have a little portable workshop loom. What a great introduction to weaving for Jeanne.

Very nice. That's probably a Little Gem made by Gilmore and they are nice looms for sure.
It all looks like a day well spent and you're getting back to YOUR loom! Yipee!

That is a sweet little workshop loom!

Lucky Jeanne! Lots of us would love a little loom given to us!

What a sweet little loom and made by Mr. Gilmore. Cool!!!

Great to see you helping another weaver get off to a good start! That is a nice sized little loom. I'm not looking for another loom, but the gift of a workshop loom would be wonderful!!

Oh, that looks like fun! Beautiful little loom. Jeanne is so lucky that she and her loom could visit you.

commoncents said...
This comment has been removed by a blog administrator.
10:59 AM

What a neat little loom! I'm with Leigh - wishing someone would drop loom(s) in my lap too.
And it's so nice to see another weaver taking up the warp. Good onya - both of you!

Now I am jealous again! Looks like a great little loom.

What a great little loom!!!!!! Wish someone would give me a cute little like that. Perfect for workshops and small projects.